A remarkable online gallery lets users navigate the subway lines of New York City, seeing the same tile work in the same sequences as train riders. Launched in Manhattan, the NY Train Project mosaic collection has since branched out to include Brooklyn, and most recently The Bronx. Keep an eye out for Queens, too (coming next year). 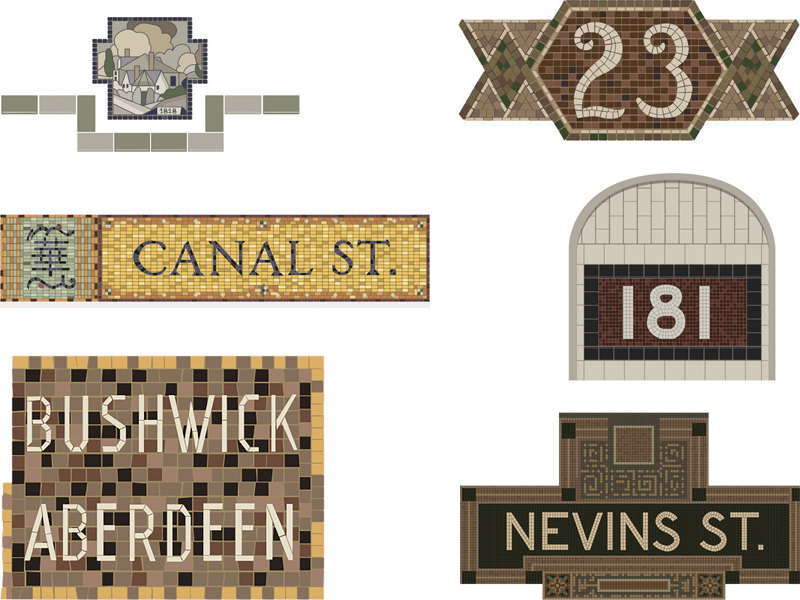 Spending dozens of hours on trains and at stations was just the start for graphic designer Adam Chang. Each mosaic then had to be digitally recreated and an interface created to digitally “travel” between them. The result is an intuitive, fluid and visually rich website. The sheer variety of signs and tile work stands out against the minimalist design.

In the course of his trips and research, Chang also picked up facts about stations to add to the pages of mosaics.  “I found out quite a bit of information during this process,” says Chang, from things like “who the original architects were that designed the first subway signs to the reason why some stations have certain symbols or plaques.”

Chang got some of his information via Wikipedia and the MTA, but also pulled “from pop culture references such as movies and music videos.” He was “surprised how many stations are part of the U.S. National Register of Historic Places” and found patterns along the way as well, like: “the red and green lines seem to have the most varying signage regarding the shapes, material, and design.”

The train project reflects Chang’s interests in the city, art, photography and travel.  “This is definitely a labor of love. This project has taken a lot of personal time and effort but I feel it’s my way of giving back a very small contribution to an amazing city that has inspired and helped me grow in many ways as a person and designer. I started this project back in 2013 and I just wrapped up the third borough the Bronx. I have Queens left, and I’m hoping to complete that sometime in 2017.”

99% Invisible
All the Buildings

If anyone wants to see him take his work internationally, Chang is on board with the idea: “As far as creating something similar in other cities, I’ve gotten the most emails asking about London. I’ve only been there once so I don’t know the train system too well, but if anyone wants to provide a trip for me to research, I would be open to it!” Meanwhile, be sure to check out the interactive project website.

Previous Episode: Prison-Go-Round: Rotary Jails Spin on Axis to Let Inmates Enter and Exit
Next Episode: Used to Be a Retail Chain: Reused Franchise Buildings Not Fooling Anybody