Despite the gravity of the AIDS crisis, in the late 1980s, there was little public acknowledgment of AIDS. A group of artists in Manhattan decided to change that.

New York artist Patrick O’Connell would spend days visiting friends in the hospital, going to funerals, and coming home to a panicked answering machine message from friends who just learned they were sick. O’Connell and other artists banded together and started making art in response to AIDS. In 1988 they began calling their collective Visual AIDS.

Visual AIDS held public events and organized gallery shows to raise AIDS awareness. But of all the work the group did, they made their biggest impact with a simple little symbol. A little concept that, at the time, was very novel: The AIDS awareness ribbon.

It all started one night in the spring of 1991. A costume designer named Marc Happel got invited to a meeting of the Visual AIDS artist caucus. Happel had heard about the group’s search for a symbol, and he had an idea.

This was at the time of the Persian Gulf War. Marc had been taking trips driving around upstate New York, where he had seen yellow ribbons tied around trees, in honor of servicemen.

Marc Happel thought that Visual AIDS could do something similar, to acknowledge the war at home. But the tree didn’t seem right. Marc thought that perhaps they could fold a ribbon and pin it on their lapels. The group decided that the ribbon ought to be red—the color of blood.

The looped, inverted-V shape came after trying out numerous styles. Visual AIDS would hand-cut, fold, and pin thousands of ribbons, all just to hand out for free, attached to pamphlets.

At this point, the red ribbons were essentially just an art project. But in mid-May of 1991, one of the Visual AIDS directors had a crazy idea: they should get their pins on stage at the Tony Awards.

A number of the artists had Broadway connections, but the group only had two weeks to convince the organizers of the Tony Awards to embrace the ribbons. They coaxed celebrity dressers into pinning the ribbons on Broadway stars before the ceremony, and they got to work making new, bigger, flashier ribbons that the camera could capture.

On the night of the show—June 7th, 1991—the Visual AIDS artists were watching with bated breath. They weren’t sure if anyone would be wearing the ribbons.

One of the hosts, the actor Jeremy Irons, walked out on the stage with a red ribbon pinned to his lapel.

The first award winner of the night, Daisey Eagan, star of The Secret Garden, wore a ribbon. Kevin Spacey wore a ribbon. Penn and Teller wore ribbons. By the end of the show, the celebrities not wearing ribbons stuck out.

But no one explained the ribbons on-air. Rumor had it that the network threatened to go to commercial break if anyone tried to talk about AIDS.

Turns out, this degree of mystery provided some incredibly good press, and the next day, newspapers were buzzing about these mysterious red ribbons and what they meant.

Word got out about the ribbons. Soon they were worn at the Emmys, and then the Oscars and the Grammy Awards. The members of Visual AIDS continued to gather to make these ribbons, huddled together in Marc’s loft, while they watched celebrities wear their creations on TV.

School groups and church groups started contacting Visual AIDS, asking how they could start their own ribbon project. It became a phenomenon.

Some members of Visual AIDS thought they should trademark the red ribbon so that Visual AIDS would get money any time it was used. But Patrick O’Connell and Marc Happel believe that if they had, the symbol would not have been embraced so universally.  The spirit of the project was that everyone had permission to use it.

The ribbon’s creators felt a backlash from other AIDS advocates. At first, wearing the ribbon had felt like a radical act. But as the ribbon became more ubiquitous, some activists called wearing it an easy out. Critics said it was a way to look like you cared about people with AIDS, without actually doing anything to help them. Basically, the same criticisms that met the Livestrong bracelet and the ice bucket challenge. 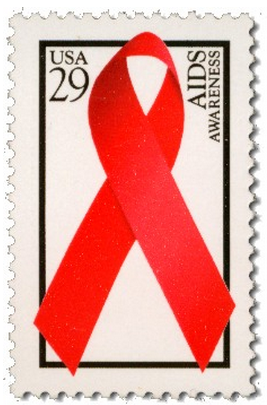 What we wanted to do was create something that a mother in Michigan could wear on the lapel of her blouse, and you know maybe her son was living in New York and living with AIDS, and she wanted to do something. I think it was just, it was also a symbol that we created that, that somebody could wear, and somebody might go up to them and say, “What is that? Why are you wearing that red ribbon?” And hopefully that person would say, “Here’s why”.

The ribbon was doing its job. People were talking about AIDS. The New York Times declared 1992 “The Year of the Ribbon.” President Clinton set up the White House Office of National AIDS Policy. The National Institute of Health expanded its AIDS research. The government-funded the national HIV Epidemiology Study. Over time, the awareness ribbon had gotten so much attention for AIDS, that more than 200 other causes began using a looped awareness ribbon as their symbol.

Now, there are more causes that want ribbons than there are colors of ribbon. The teal ribbon, for instance, is used for ovarian cancer awareness, anti-bullying awareness, Tourette’s syndrome awareness, and tsunami victim awareness.

Marc Happel actually thinks it’s great that people took that simple little ribbon, made it their own, and used it for whatever cause they choose to fight for.

Still, that original red ribbon retains its relevance. Even if AIDS isn’t the killer it used to be, the number of people living with HIV in the United States is now higher than ever before. The disease is still with us.

And so is its symbol.

Previous Episode: On Location
Next Episode: From The Sea, Freedom