Nearly two millennia before slotted quarters begat cigarettes or snacks, the world’s first vending machine poured out portions of holy water thanks to mathematician and engineer Heron of Alexandria. 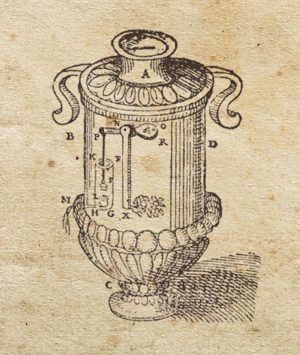 Heron (AKA Hero) was an avid experimental designer who dabbled in all kinds of things. He was ages ahead of his time, designing early rocket and steam engines, wind-powered devices, force pumps and other mechanically sophisticated inventions.

The vending machine may not have anticipated quite such epic developments as steam-driven trains or space-age rockets, but it did hint at something that would become widespread in the post-Industrial era. Much like modern versions, his device involved dropping a coin in a slot. That coin would weigh down a pan attached to lever, which in turn opened up a valve. As the pan tipped, the coin slid back off of it and a counterweight returned the mechanism to its original configuration, turning off the flow. 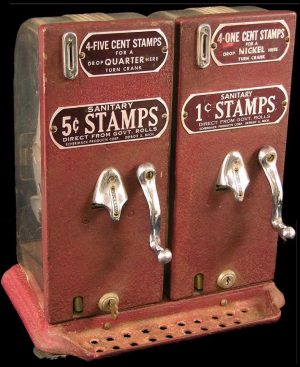 Like many Roman Empire technologies, the vending machine was long lost to history. Such devices would not resurface until the 19th century. Early modern vending machines in late 1800s London sold postcards and stationery, followed by ones in Germany vending chocolates and others in the United States dispensing both candies and figurines — ideas which have persisted and evolved. From there, though, vending machines also branched out in a series of wild new directions.

Throughout the 20th century, entrepreneurs put everything conceivable inside vending contraptions, including but not limited to: coal, eggs, potatoes (both solid and mashed), books, tableware, fishing worms, pints of draft beer, cat hats and dog wigs (alongside more conventional products like newspapers and magazines, of course).

With the rise of vending machines came various design challenges, including currency verification, which has taken different forms over time. In the olden days, forgers would trick machines by faking denominations, turnings smaller bills into more valuable variants. Coin-only machines were often employed to avoid this problem entirely, relying instead on things like size, weight, and metallic composition. Plus, the stakes were lower for these less valuable metal disks.

Coin-operated TVs, games and music players became popular, too, though of course, their popularity has faded in the era of mobile devices — these days, airport and train station machines are more likely to vend accessories for devices, things like chargers and earphones.

Vended media is less and less common, but still persists in places — there are still stores with vintage book-vending machines, and even non-profit devices that will print out short stories on demand. Some old vending machines have been given new life, too, like a series of art dispensers that were originally designed to spit out cigarettes.

As a technology, vending machines have evolved considerably, but while their workings and offerings have shifted over time, they manage to persist, offering convenient access to big things in small packages.

Insert Coins for Lumps of Coal: A Brief 2000-Year History of Vending...