Viewed from the sky or seen up close on the ground, giant X shapes and triple bar patterns scattered across the United States look equally perplexing. The former (above) are like huge treasure-map markers, but built at the scale of the map and not the ground represented. The latter (below) are even stranger, like geometrical land art, a secret code or perhaps a welcome sign for extraterrestrial visitors.

Despite variations in their details, all of these massive markers were designed to serve similar functions as aerial photo calibration targets — terrestrial test patterns that are essentially Snellen charts for aircraft and satellites. Most of them were built by and for the military and some date back to the early days of space-based surveillance initiatives.

Per the Center for Land Use Interpretation, “the targets function like an eye chart at the optometrist.” When it comes to the 5:1 aspect ratio tri-bar patterns, “the smallest group of bars that can be resolved marks the limit of the resolution for the optical instrument that is being used.” Still, even the bigger tri-bars are generally fairly small compared to the gigantic grid of X’s arrayed across a remote section of the Southwest.

In the 1960s, over 100 X-shaped concrete targets were poured in a grid spanning hundreds of square miles in Arizona. From above, they look almost artificially perfect, each one sixty feet across and precisely constructed. For years, their exact function was a mystery to most (by design) — later, their specific purpose was declassified.

Launched in the late 1950s by Central Intelligence Agency Directorate of Science & Technology (with assistance from the U.S. Air Force), the Corona program involved tasking satellites to take photographs of foreign states including the USSR and People’s Republic of China.

This Cold War era surveillance project, one of the first to employ satellites as spy tools, was an incredibly complex endeavor at the time. Project satellites had to use “index stars” (distant stars tracked by on-board sensors) to stay in alignment as they traversed the globe. They also carried special durable film to withstand the rigors of orbital trips.

Film retrieval involved a reentry capsule (or “film bucket”) that would deploy a parachute on its way down, then be caught in mid-air using an aircraft-towed cable. And all of this effort would be for nothing if the images were out of focus or the size of enemy structures and vehicles was unclear, which is where the giant X’s come into play.

Initial photos were indeed blurry, but the grid of shapes in the clear, dry Arizona desert helped the government calibrate their cameras. With adjustments made, Corona satellite program was continued and captured huge numbers of intelligible photos. Over the next decade or so, these satellites shot over 800,000 images (2.1 million feet of film).

Eventually, the X’s were rendered obsolete in part due to evolving technology. Groundwater removal also caused slight shifts in the landscape that were sufficient to skew the initially precise relative positions of points on the grid. Many of these targets have since been destroyed but some remain scattered across the desert.

When full details and images from the Corona program were finally released to the public in 1995, Vice President Al Gore noted that project satellites “recorded much more than the landscape of the Cold War. In the process of acquiring this priceless data, we recorded for future generations the environmental history of the Earth at least a decade before any country […] launched any Earth resource satellites.”

An Array of Arrays

The tri-bar arrays serve a similar function to the X’s but for a broader range of aircraft. They are “widely used to determine the resolving power of microscopes, telescopes, cameras, and scanners,” per the CLUI. “For aerial photography, they provide a platform to test, calibrate, and focus aerial cameras traveling at different speeds and altitudes.”

These arrangements of parallel and perpendicular bars can be found in various remote places, including California’s Mojave Desert. Most are located inside military complexes, like an Air Force base in Florida and a Navy drone airport in Maryland. Some stand alone while others are painted right onto landing strips, letting pavement serve a dual purpose. The largest array spans 20 miles alongside Edwards AFB. 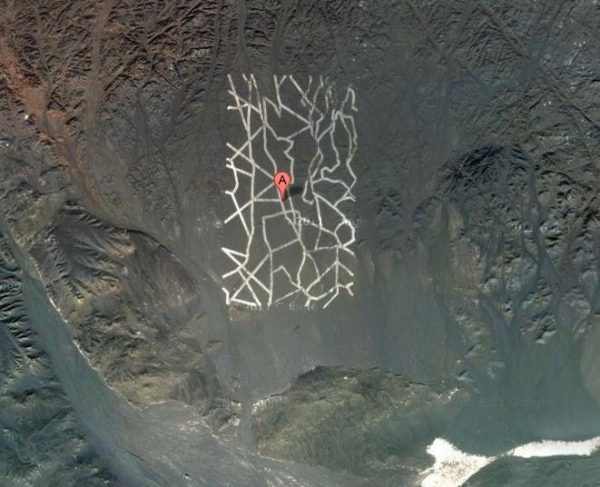 Calibration targets come in all shapes and sizes — X’s and tri-bars are not the only types. The above pattern, spotted in China (Dunhuang, Jiuquan, Gansu, north of the Shule River in the Kumtag Desert), is generally assumed to serve a similar function, though it is hard to say why they selected this dazzlingly abstract configuration.

But like the giant concrete arrows used to direct planes in the pre-radar age, many of these calibration targets have since been abandoned — they have proved obsolete in the age of digital photography.

Points of No Return

As described in the 99pi episode embedded below, the U.S. is also littered with mysterious-looking arrows. These can be found in rural landscapes from New York to San Francisco. Some are still paired with buildings that look a bit like old fire watchtowers. Hundreds of tower-and-arrow sets were constructed in the early 1920s as the country’s airmail delivery program began to take flight, but before radio communications and radar had fully made their way into the cockpit.

The lighthouses and the arrows alongside them would help pilots navigate across the country at night, eliminating the need to fly strictly by day. Within a year, there were 500 active lighthouses and various airfields from coast to coast. They quickly became obsolete, however, and were deserted. Today, most of the towers are gone, recycled for their steel during World War II, but many of the concrete pads remain.

Meanwhile, for more on Snellen charts (visual acuity posters designed for everyday eyes) tune into the second volume of Mini Stories (above).

Behind the Screens: Windshield-Clearing Designs from Wipers to Spin

In the biographical feature film Flash of Genius, we... [Read More]