They are hulking, but graceful — human-made whales that float in the air. For over a century, lighter-than-air vehicles have captured the public imagination, playing a recurring role in our visions of alternate realities and futures that might have been. In these visions, cargo and passengers traverse the globe in smoothly gliding aircraft, then dock elegantly at the mooring towers on top of Art Deco skyscrapers.

In real life, perhaps the most familiar craft of this type is the blimp emblazoned with the Goodyear logo. But a blimp is a non-rigid airship, meaning: there’s no structure inside the balloon. Rather, the shape is maintained by the pressure of the lifting gas inside. A little cockpit, engines, and rudder were attached to the outside.

Today, blimps are mostly just PR gimmicks, lighter-than-air crafts have been seriously considered as the perfect design solution for all kinds of problems over the years, at least in theory. And despite setbacks and failures, some people still haven’t given up on the promise of airships.

Recent companies have raised money to create airships that provide internet service. In the 1980s, a professor pitched blimps with dangling wires to zap ozone-eating chemicals over the South Pole. Back in the 70s, airships were supposed to help usher developing nations into the modern age, skipping over roads and railroad infrastructure. Before that, in the 50s and 60s, the idea of nuclear-powered airships was floated as a solution to energy and shipping needs. And in the 20s and 30s, they were set to fulfill the imperial ambitions of nations like Germany, Great Britain and the United States, facilitating global transportation. Of all those failed attempts to realize the full potential of airships, the rigid airships of that earliest era came the closest to changing the world.

Unlike blimps, these rigid designs featured stable metal frameworks into which gas bags were inserted, like peas in a pod. A cloth cover was stretched over the frame to protect the interior. And because it wasn’t a pressure vessel, they could build spaces into the framework as well, like crew quarters, dining rooms and lounges. 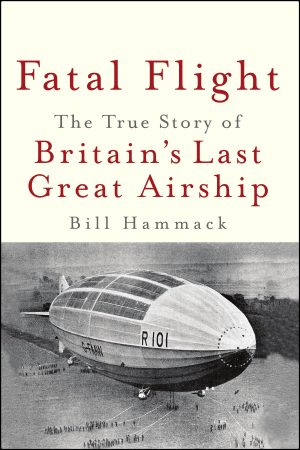 This rigid-structure approach allowed airships to travel faster than blimps, in part because blimps would deform due to wind. To clarify: it’s easy to get confused, but the term “dirigible” is just the French name for an airship, and Zeppelin was a German company that made airships (like: the Kleenex or Band-Aid of the airship world). But the proper term, as generic and boring as it sounds, is “airship.”

The most promising (and most opulent) rigid airship of the 1920s era was Britain’s R101 (the R stands for rigid) and its rise and dramatic fall is the primary subject of engineering expert Bill Hammack’s new book about Britain’s last great airship, called: Fatal Flight.

When it comes to the dream of airships dominating the skies, the catastrophic and very public Hindenburg disaster may have been the final nail in the coffin, but it was the crash of R101 that built that coffin.

The R101 was built to connect the global British empire. It was designed to fly from London to Karachi in five days, which is ten days faster than by sea. Taking a plane that distance took sixteen days, because planes had to stop so often to refuel. Airships could also carry 30 to 40 times as much cargo as airplanes. 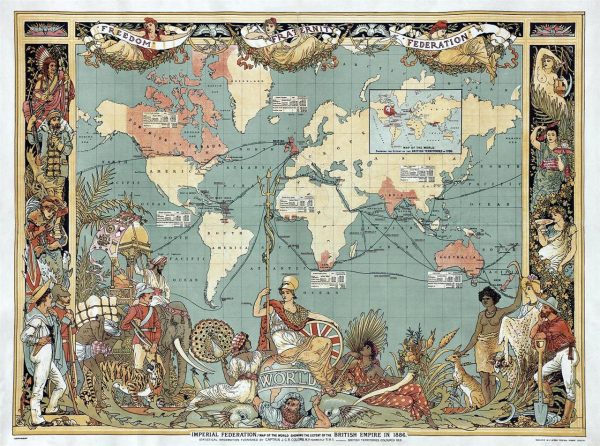 Airships made a lot of sense for an empire whose reach had exceeded its grasp. So Great Britain built the R101 and the R100 (which was its sister ship, supposed to go to Canada and back) as the first two rigid ships in a fleet that would give the crown dominance over the skies to match its centuries-long dominance of the seas.

An airship is conceptually quite simple, but it’s still an engineering marvel. It’s a gargantuan cigar-shaped math equation, balancing lift on one side of the equation and weight on the other. Minimizing the weight of the airship was always a challenge — the “rigid middle metal framework … is one of the most difficult parts because that has to be lightweight yet strong,” explains Hammack.

At the same time, the R101 was supposed to match the sturdy luxury of a high-end ocean liner. But to allow for those essential refinements, everything else could only have the thinnest veneer of opulence because it needed to weigh as little as possible. One person described touching the ceiling and it feeling “like a piece of stage scenery,” recalls Hammack. “All the walls were actually fabric. The pillars in the lounge were made from balsa [wood] covered with metal. Tables were also balsa and the chairs were made of the lightest cane. So it was really kind of an illusion, the solidity of the ship, because you just couldn’t afford to lift tons and tons of stuff.”

On the other side of the equation is lift, created by pumping in lighter-than-air gas, in this case: hydrogen. And while Hammack concedes that “flammable hydrogen seems like a very poor choice,” he also argues that “it was, for a commercial airship, the only choice.”

Hydrogen was used instead of non-flammable helium, which is both heavier and provides less lift, because ships like the R101 were designed to transport cargo. Once you add the frame, gas bags, passengers, personnel and cargo, helium just does not create enough lift to compensate for the payload.

The flammability of hydrogen was, of course, a concern in airships, but flight engineers and crew were habituated to its dangers, much like we are habituated to the dangers of combustion engines today — we know better than to light matches near gas tanks.

The other reason why helium wasn’t an option on a commercial airships was the cost. It was produced mostly in the U.S., which, for Britain, would also add cost in terms of transportation across the Atlantic. In total, hydrogen was about a hundredth the price. 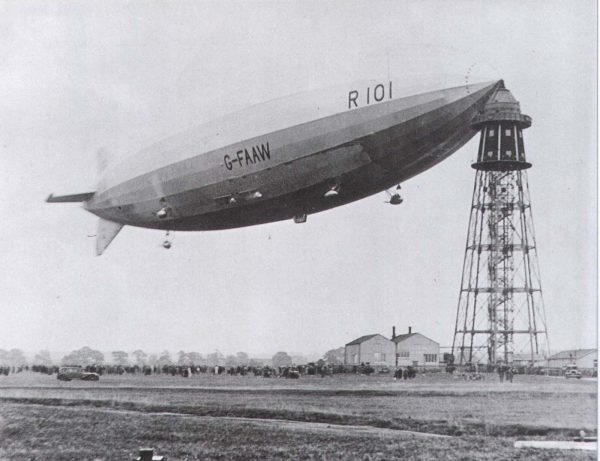 The gas bags made to contain the hydrogen were also an engineering marvel. Engineers tried out synthetic fabrics coated with latex, but these didn’t work — they variously leaked or failed when contracting and expanding. Ultimately, they turned to the traditional material used by the Zeppelin company: the ox intestines, which were very thin and flexible and only leaked very slowly. But it took a lot of intestines to make a gas bag — each ox could provide around a square foot, but gas bags required around 30,000 square feet. In the end, over a million and a half ox intestines were needed, all carefully stitched into fifteen bags. Together, they lent a musty odor to the airship that was hard to mask.

The R101 was taken on a few test flights in and around its hanger outside London to great fanfare. In fact, Bill Hammack surmises that the focus on PR, rather than more rigorous and deliberative testing, led to the tragedy during the R101’s first attempted flight to India in 1930. 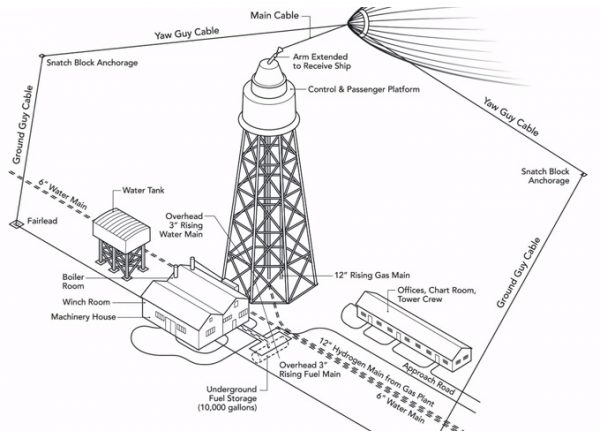 The craft departed on the evening of October 4th with over 50 people on board, including personnel as well as observers and dignitaries. This demonstration flight was to cross the English Channel, travel over France and end in India, showing the possibilities of airships. 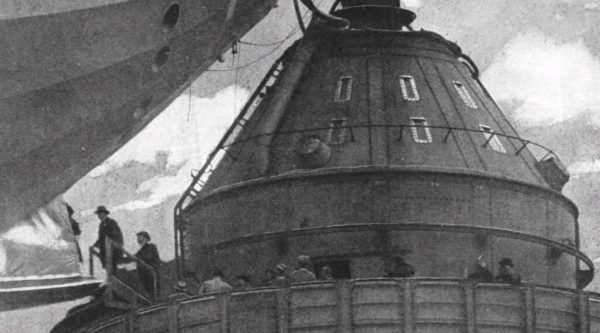 But near Paris, the R101 encountered wind speeds of up to 40 miles per hour. The airship bounced up and down in response. The top frame covering failed, and rain began to pelt the gas bags from above, and decreasing lift dropped the vehicle to around 500 feet. In the ensuing panic, engine power was cut and lift was lost entirely, causing the ship to dive nose-first into the ground. It slid into a grove of hazel and oak trees, and promptly burst into flame. There’s some debate as to why it ignited — it could have been started by flares kept in the control car, which ignite on contact with water. Whatever the spark, the hydrogen caught fire and burned the ship. Only six people survived. 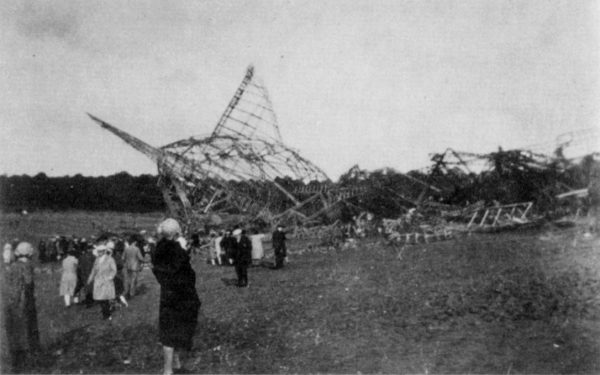 The wreckage had barely cooled when the British government halted their airship program. The R100 had flown to Montreal and back, but it was put away after the incident in France and never flown again. Eventually, parts of the R101 were sold for scrap, and “according to a newspaper account,” reports Hammack, “it was sold to the Zeppelin company and they used part of that metal to make the Hindenburg.”

Because of the romanticism wrapped up in airships, their flexibility when it comes to moving huge cargo, and the fact that they require very little infrastructure, the hope that airships will make a return to the skies has never gone away. But there are headwinds, beyond simply a history of stark disasters.

At this point the airplane has had a century’s head start in terms of development, improving efficiency, speed and safety, leaving airships behind in their wake. But if past is a precedent, some enterprising engineer is in a room full of venture capitalists right now trying to convince them that giant airships are the solution to some pressing world problem. In the meantime, the airship will continue on in science fiction stories as this quick and easy visual cue that we’re in a world that’s like ours but a bit different, and perhaps also more wondrous.

For more on the R101, check out Bill’s book, and see more of his delightful engineering videos on YouTube.