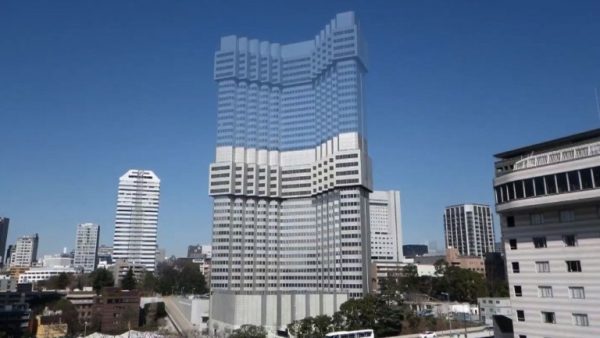 Rather than blasting a building with dynamite or crushing a structure piece by piece with loud machinery, deconstruction companies carefully “unbuild” one level at a time. Viewed from the exterior, tall buildings appear to simply shrink and ultimately vanish entirely.

Unbuilding from the Top Down

One such approach starts at the top of a structure and works its way down. The Taisei Ecological Reproduction (or: Tecorep) System begins by enclosing the top floors of a building. An architectural shell wrapped around these floors provides shelter as well as sound proofing.

A ceiling crane system suspended from the top of the cap (inside the sheltered deconstruction zone) helps facilitate disassembly. After a set of levels is disassembled, columns supporting this upper cap are lowered. The process is then repeated, floor by floor, all the way down.

In the case of the Grand Prince Hotel Akasaka in Tokyo, a time-lapse shot (left) shows what the process looks like to an outside observer while a similar video (below) captures the interior perspective.

There are a number of big benefits to this approach:

An electric conversion system turns the process of lowering materials to the ground below into a source of power for an on-site battery. Essentially: potential energy embedded during construction is converted into kinetic energy on the way out, in turn tapped for reuse. The electricity generated in this process powers lights and other equipment on the deconstruction site.

Unbuilding from the Bottom Up

A similarly clever system has also been developed that works from the bottom up rather than the top down. The Cut and Take Down Method pioneered by Kajima involves dismantling buildings at ground level, slowly taking each floor apart and then lowering the next one.

This variant has its own advantages. Working from the bottom floor further reduces demolition time and cuts down on noise pollution as well. Materials are also easier to separate out for recycling since they do not have to be bundled and lowered.

Of course, these approaches take more time and money than simply smashing structures or blowing up buildings, but those costs are made up in other ways — a reduced environmental footprint and more efficient recycling methods help offset the extra inputs required.

These systems may even have lessons for architects — buildings with limited lifespans could be designed to be deconstructed, assembled in ways to facilitate their own eventual (and literal) reverse engineering.

The remains of Carnuntum, an ancient Roman city... [Read More]