Long before the days of celebrity voices calling out directions while you drive, paper-based attempts at mobile mapping generated an intriguing array of proto-GPS systems, including this quirky pair of manual and automated moving map displays. 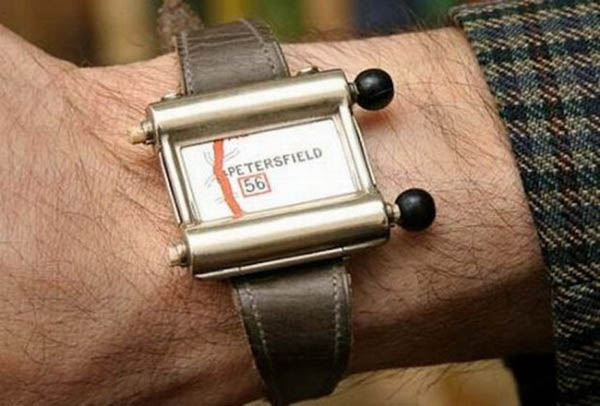 As early as 1927, the Plus Four Wristlet Route Indicator came with single-journey scrolls plugged into a wrist-wearable device. The watch-like gadget needed no batteries, and worked quite like traditional scrolls, with paper rolling out from one side then back into the other. 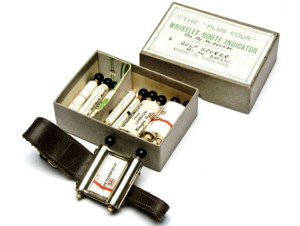 The Wristlet wearable was sold with a core set of 20 scrolls spanning various routes, most of them revolving around London, with more available for order from the manufacturer. Switching from one of the preset destinations necessitated stopping and swapping out scrolls along the way. Drivers or passengers would manually wind a dial on the side to keep the map moving along with their vehicular progress. 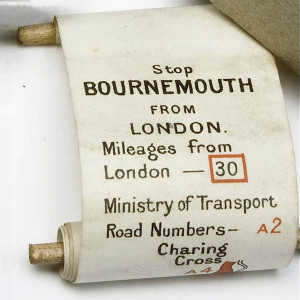 Maurice Collins is a 73-year-old Londoner and owner of an antiques collection that includes one of these Wristlets. Hers has been on display in various museums and other public exhibitions. She calls the gadget “an amazing invention” but notes “I’ve never tried it myself and I’m not sure how successful it would be as a navigation device. It’s the sort of thing you can imagine Bertie Wooster using and then his butler Jeeves having to dig him out of a hole.” 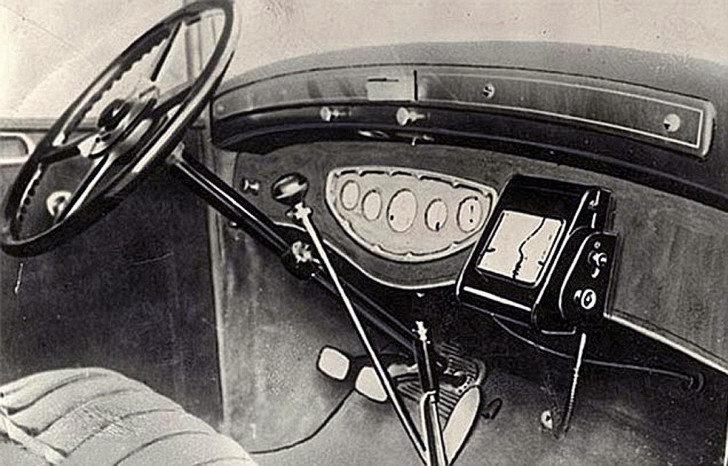 A similar but more advanced device developed in 1932, the Iter Avto likewise employed a paper scrolling system but with a twist: the pages moved automatically as the vehicle progressed. 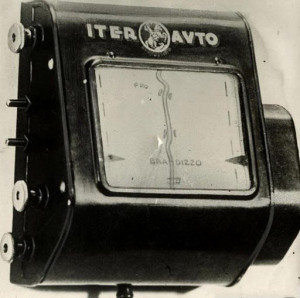 Thought to be the first automated car-mounted navigation device, the gadget was tied into the speedometer in order to pace travel progress. Like its wrist-mounted relation, the Avto was likely limited in production volume, with sales targeted at the car-owning elite. There was still plenty of room for human error, however, as drivers would need to stop the device when deviating at all from the specified route or risk losing their place on the map. Used properly, however, and it could serve as a significant travel asset.

Developed in and for Italy, the featured map set of this device included various major cities and towns, and its marketing (translated from Italian) boasted its granular accuracy and usefulness:

“Motorists, the Iter-Auto is your patron saint on Earth that will guide you by the hand showing you in your travels with impeccable accuracy, by means of a map-route carried on in perfect synchronization with the driving of your car, the way to go as well any data or information practices of those continuing needs such as: crossroads – bridges – bumps – level crossings – turns dangerous – supplies – relief – garages – hotels, etc.. advising in a timely manner (about three kilometers before) the driver must slow down at the face of danger.”

Both of these device designs portended elements of future GPS technology, presciently hinting at mobile map displays that would eventually dominate our everyday lives (to the point where many people today cannot even read ordinary maps).

It is almost as if their designers could foresee a world in which such tools were ubiquitous, worn on wrists or placed in cars, but lacked the radio, satellite and computer systems that would make a complete realization of their vision possible. Today, we take such systems for granted, as integral a part of our vehicular travels as the deceptively-simple steering wheel.

“From the commonplace to the sublime,” writes architect... [Read More]

Late for work in Manhattan, you push the... [Read More]