The United States Department of Defense recently posted an open call for a new kind of bullet, specifically: one that will contain an engineered seed. These biodegradable bullets are to be used in U.S. Army training grounds around the world. Go Green, Go Army?

After a round lodges in the earth, it is designed to sprout plants that will remove soil contaminants and be safe for humans and animals. Given the hundreds of thousands of rounds fired by the Army in training zones, the effort is laudable if a bit surprising.

If the DoD seems an unlikely source of eco-warriors, consider it in context: the department sees climate change as a security threat. And the DoD is not the first organization to wonder about having conventional weapons double as plant-seeding devices. Years ago, the Flower Shell project took aim and fired in a similar direction, filling shotgun shells with seeds. Its inventor was sick of spending so much time weeding, seeding and cutting, and thus decided to empty a shell of its shot and pack the space with flower seeds. 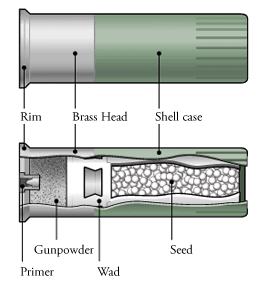 And it worked: “Walking through a field of meadow flowers, cornflowers, daisies and poppies an early summer Sunday morning made me realize this was working. This flourishing field was my creation, it was all done with 142 shotgun shells.” 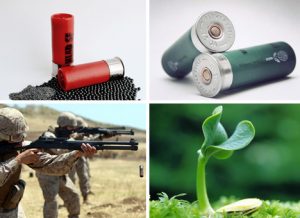 Of course, firing shotguns is fine for rural homesteads but not so appropriate for public urban contexts. It also leaves behind metal and plastic which are not exactly eco-friendly leftovers. Guerrilla seeding in cities generally calls for another, more timeless weapon from the go-green armory.

The DoD initiative and Flower Shell project both represent expansions of the guerrilla gardening arsenal that arguably started with seed bombs (also known as seed balls or grenades). In urban environments, activists can use these to lob seeds into lifeless soil at a distance (e.g. over fences or into medians without being seen). Some weapons of choice are fairly home-grown solutions by do-it-yourself types, but others are a bit more refined, ranging from fun to practical. 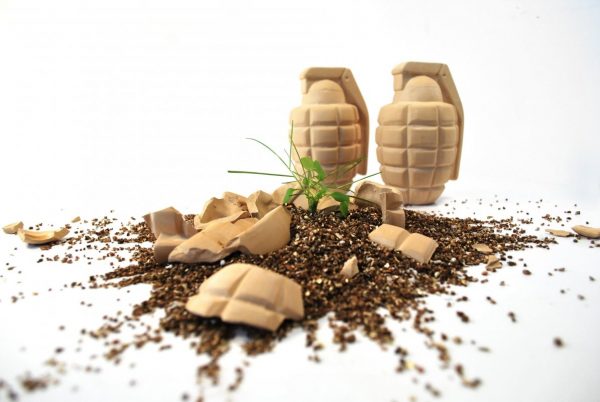 The “Throw & Grow” Flower Grenade, for instance, is a clay shell packed with buttercups and poppies. Designed (wisely or otherwise) to look like a conventional pull-pin grenade, the shell is made to break apart on impact then fade back into the soil around its landing point.

The Greenaid (a play on “grenade”) project is a bit more ambitious, serious about making seed bombs a useful but also city-specific urban tool. Their approach: turning old gumball machines into seed bomb dispensers that will deploy balls of clay, compost and seeds on demand. The contents are tailored to specific regions — native wildflowers unique to each location. The group has found that high-traffic machine placements can go through up to 200 seed balls per month, each raising a quarter for upkeep and charitable causes.

Such acts of small-scale guerrilla gardening are by no means limited by the availability of third-party seed bullets or bombs. There are plenty of DIY video tutorials and other guides to help interested activists. But bomber beware: not all cities take kindly to rogue gardeners. Also, would-be eco-warriors should make sure their arsenal is suited to regional soil conditions, weather, seasons and types of plants.