How to honor unidentified remains has always been one of the great conundrums of war. The Romans were fond of honoring them with an empty sarcophagus. After the Civil War, the Union buried 2,111 soldiers in a mass grave in Arlington that they purposely built in the middle of Robert E. Lee’s rose garden. It wasn’t until World War I that it occurred to anyone to bury a single unknown soldier in a public setting.

World War I ushered in an era of total war and mass conscription, in which the combatants on both sides were mostly ordinary citizens, often rendered anonymous amidst the violence of the Western Front.

“Everything about the war — not only the numbers, but the nature of it was dehumanizing,” says Robert Poole, author of the book On Hallowed Ground: The Story of Arlington National Cemetery.

One British chaplain named David Railton saw some of the worst of the fighting on the front lines. Railton would spend his nights conducting funeral services over the often unidentifiable remains of soldiers ripped apart by shellfire, sometimes burying them on the spot or en masse in the giant craters the shells had left behind.

He thought about how terrible it was that so many people were essentially being forgotten  — they deserved better than that. It was around this time that David Railton came across a temporary grave, a few miles behind the front, marked only by a cross bearing the name of a regiment and the words: “An unknown British soldier.”

After the war, Railton advocated for a grave bearing the body of a single soldier to bring the impossibly large tragedy down to a human scale. The soldier’s anonymity would allow each person who came to the grave to project whatever was most important to them onto the mystery. It didn’t matter if you wanted to honor all those who served or merely those who died, those who volunteered or those who were drafted, or even whether you were for the war or against it. Everyone was free to mourn in their own way.

When Britain dedicated the Tomb of the Unknown Warrior in Westminster Abbey in 1920, it garnered a lot of attention. The dedication alone attracted so many mourners, the line for viewing lasted ten days. Britain’s unknown warrior wasn’t the only one. France, Romania, Italy — everybody at the same time jumped on this idea. Over fifty countries would end up building similar memorials. In part, because the formula was so easy to follow — all that was needed was the body of a single unknown soldier.

The American memorial is especially beautiful. It sits at the top of a hill that overlooks the rest of Arlington Cemetery. It has been watched over day and night since 1937 by a lone guard, forever marching back and forth in front of the tomb.

The remains in the tomb are not even technically referred to as an “unknown soldier.” No one knows which service they’re from, so instead of “soldier” or “sailor” or “marine,” they’re simply referred to as the “Unknown.” In fact, anything that narrows the scope of who this person could be — including where exactly they were found is purposely withheld from the public in order to make sure that they represent every possible service member. It’s one of the reasons the tomb has become one of the Washington D.C. area’s biggest tourist attractions. 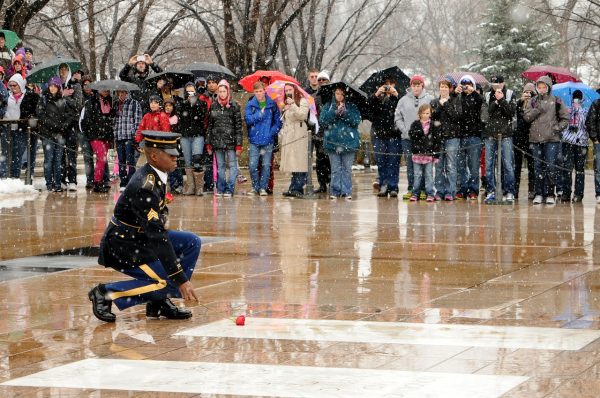 But in 1956, one small, seemingly innocent change to the formula of the Unknown would prove problematic: we began to add another set of unidentified remains for every subsequent war. World War II, Korea, and Vietnam — each would get their own Unknown.

At first, there were a lot of Unknowns to work with. In World War I there were around 1,648 Unknowns, in World War II there were 8,526, the Korean war there were 848. But thanks to improved battlefield evacuation tactics, the Vietnam War produced only four sets of unidentified remains that could potentially go into the tomb. Then, as more information about those remains was discovered, only one set of remains remained unknown. That single set of remains was known only as X-26, but his actual name was Michael Blassie.

Michael Blassie received an appointment to the Air Force and fell in love with flying immediately. At flight school, Michael was assigned to fly a ground attack aircraft known as the A-37. Dubbed the “super-tweet” it was designed to fly low over its target. Pilots loved it because being that close the ground heightened the sense of flight and speed.

By 1972, when Michael was deployed, America’s military presence in Southeast Asia was shrinking rapidly. There were fewer than 25,000 US servicemen left in Vietnam, as opposed to the over 500,000 who had been deployed by the late 1960s. American serviceman who remained behind were stretched thin. They had to do more with less and that meant Michael was going to see a lot of combat.

Michael’s missions took him all over Vietnam, but the most dangerous was arguably over a place called An Loc, a town about 50 miles north of Saigon. In 1972, it was still under the control of the South Vietnamese military, along with a handful of American advisors, but it was surrounded by an invading North Vietnamese Army.

“The city of An Loc was totally leveled– it looked like Hiroshima,” says Chris Calhoon who was stationed there as an Army Ranger. At one point he described the wounded, with their meager medical support, as looking like something out of the Civil War. They were completely cut off from the rest of the world. One of Calhoon’s duties, in the midst of all this chaos, was to call in airstrikes. Michael Blassie’s squadron was providing that air support over An Loc.

It was on one of these bombing runs, shortly before Calhoon arrived in An Loc, that Michael Blassie flew his 132th and final mission. Michael’s plane had crashed deep in North Vietnamese held territory. A helicopter team tried to get to the crash site, but due to heavy enemy fire, they had to leave after just a few minutes empty-handed. Blassie was declared missing in action and presumed dead. His body wouldn’t be coming home.

In 1994, over two decades after Michael had been killed, his family received a phone call from a complete stranger named Ted Sampley. Sampley was a former Green Beret who had served in Vietnam. He was convinced the government wasn’t telling veterans everything it knew, and he was calling Patricia Blassie with an outlandish theory about Michael’s death. He told her that he had been researching who was shot down on the date of Michael’s death and he believed that her brother’s remains were in the Tomb of the Unknowns.

“I thought this is the best example of internet conspiracy garbage I’ve seen to date,” says Vince Gonzales, a reporter for CBS Denver who came across the story three years later in 1997. Still, as hesitant as he was, Gonzales thought maybe there could be more to the story.

Sampley had no direct evidence proving Michael was in the tomb, but that didn’t make him wrong.

Whatever was known about the remains of the Vietnam Unknown had never been revealed. It was all part of the effort to make sure that the Unknown could represent everyone who ever fought in the war. Sampley had come across some second-hand accounts suggesting that America’s only set of unknown remains from Vietnam had been recovered from an aircraft that had been shot down in 1972. And he had only been able to find one missing plane that fully matched the plane’s description: Michael Blassie’s.

Gonzales began filing FOIA requests and eventually got back a thick envelope with military documents showing the entire process of the Unknown Soldier selection process. They detailed that Michael Blassie’s remains had been recovered in Vietnam and that the person who recovered them was Chris Calhoon.

In October of 1972, over five months after Blassie’s plane had disappeared into the jungle, Calhoon assembled a South Vietnamese patrol to enter North Vietnamese territory to find the wreckage. When they came back, they handed Michael Blassie’s remains to Calhoon.

The remains did not consist of much, just six bones. But they had also brought back other evidence: an uninflated raft, a parachute, part of Michael’s flight suit, and critically: his wallet with pictures of him and his family. There was no question, the remains were Michael’s. Calhoon assumed that Michael’s remains would be returning to his family, but that wasn’t the case.

The remains would eventually arrive at the Army’s Central Identification Laboratory in Hawaii, but not before the wallet which was critical in linking the remains to Blassie went missing. Even though he knew about the missing wallet, the head of the lab, using now outdated techniques, determined that the remains did not match Michael Blassie’s physical description. Instead, they were simply designated as BTB — believed to be — Michael Blassie. Without a positive match, due to Army policy, the Blassie family could not even be told that any remains had been found.

Pressure began to mount in Washington to place a service member from Vietnam in the tomb of the unknowns, but by 1980 the Blassie remains were the only ones left that hadn’t been conclusively identified. Even though they were still officially believed to belong to Blassie, the lab was ordered to strip the remains of their “believed to be” designation, and give them the anonymous designation X-26. The DNA technology that could conclusively identify the remains was just around the corner, but in 1984 they were ordered to prepare X-26 for burial.

The file that Vince discovered made it clear the the person who had been put in the tomb in 1984 had been far from unknown. Armed with the documents, he teamed up with veteran CBS correspondent, Eric Engberg. They talked to anyone they could find who was involved in the unknown selection process, and when they felt they were ready, they handed over their findings to Patricia Blassie.

On May 14, 1998, the Department of the Defense disinterred the remains of the Vietnam veteran from the Tomb of the Unknowns. DNA samples were taken from Michael’s mother Jean and his sister Judy and tested against the remains. They were a match and Michael Blassie’s remains were returned to his family.

Today, there is no body representing Vietnam at the tomb of the unknowns. Thanks to improved forensics, there will likely never be an unknown from Iraq or Afghanistan or any future war. The military is now in the process of using the DNA from the families of missing veterans to identify over 650 sets of unknown remains from the Korean War. It’s conceivable that they could soon use the same techniques on the unknown serviceman inside the tomb. The unknowns from World War I and World War II are another story for now, but anything is possible.

Patricia still visits the tomb. She says she’s not sure why she does it, but it means that she’s gotten to know some of the guards. One of them told her once that their mission — guarding the Unknowns — is never really over. In Michael’s case, just this once, their mission was completed. They were just looking out for him until he could go home. 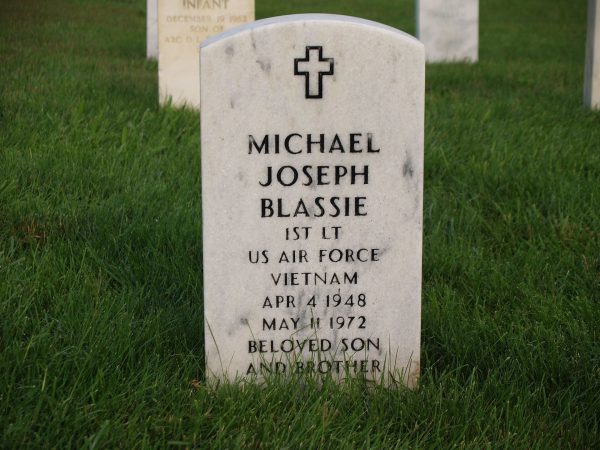 Some doors require printed instructions to operate, while... [Read More]