Abbey Meyers’ first son, David, was born in 1968. By the time David was two, Abbey noticed something was different about him. David’s face would twitch. He sometimes made involuntary noises. His arms flailed around out of control, so he could barely feed himself. Other kids would make fun of him and David’s teachers often got upset with him in class. “You can imagine the torture he went through,” says Abbey, recalling David’s childhood. Doctors were puzzled by David’s symptoms and his condition seemed completely mysterious, until one Sunday morning,  when Abbey happened to catch an article in the paper about Tourette syndrome. At the time, many doctors were not familiar with the disease. Not much was known about it.

Meyers found a specialist who said there was a possible treatment for Tourette’s. It was a drug that was going to be marketed for schizophrenia but had been used in Europe for treating Tourette’s. David got in on a clinical trial to possibly bring this drug to the United States, and it worked really well for him. However, the drug didn’t test as well for treating schizophrenia, which was supposed to be its more common use.

Since so little was known about Tourette’s, the drug company decided the market for Tourette syndrome wasn’t big enough and they just dropped the drug entirely. They wouldn’t make the drug. They wouldn’t sell it. This is how Abbey Meyers learned a term would define the next few decades of her life: “orphan drugs.”

Meyers learned the hard way: drug companies weren’t interested in developing treatments for rare conditions. The big money was in drugs with lots of customers, like blood-pressure medications. They didn’t know how common or uncommon Tourette’s was, and they didn’t think selling a drug for it would be lucrative.

Therefore, promising treatments, like the one that had been working for David, became “orphan drugs,” with no pharmaceutical company to raise them. So Meyers joined the Tourette Syndrome Association and decided she could help by lobbying and spreading awareness about this solution that was just out of reach.

By June of 1980, Meyers and her allies were able to get a California Congressman to hold a hearing about the problem of orphan drugs. This was their big chance to finally have a national audience and put pharmaceutical companies on the spot.

Unfortunately, nobody from the pharmaceutical industry showed up. Hardly any elected representatives showed up either. “Nobody was there except in the very, very last row in the room,” says Meyers, “a young man was sitting there and I had no idea who he was.”

This young man turned out to be a reporter for the Los Angeles Times, and he published a very short story article buried in the middle of the paper where nobody was likely to read it.

In the 1970s, there was a wildly popular television series called Quincy, M.E. In it, superstar Jack Klugman plays a medical examiner who used forensics to solve crimes. It was kind of like a precursor to CSI.

After that little story in the Los Angeles Times came out, Meyers got a call from someone who said he was a producer on Quincy. Abbey Meyers was skeptical, but she realized the guy was telling the truth. It turned out this producer was Maurice Klugman, the brother of the show’s star, Jack Klugman, and he had a personal stake in the matter. He happened to have a rare disease himself.  He was dying of bone cancer and the story of orphan drugs resonated with him.

In the resulting episode of Quincy, a teenager with Tourette’s dies under suspicious circumstances. As it turns out, it was not exactly a murder, but by the time Quincy figures that out, he meets another young man with Tourette’s and gets obsessed with the problem of orphan drugs. Quincy goes all-in on the orphan drugs issue. He lobbies pharmaceutical companies, the FDA, and congressmen.  The episode basically pivots from a murder mystery to a policy drama. In the final act, the character with Tourette’s gets a pep talk from Quincy and delivers a blockbuster speech at a congressional hearing.

After the show was broadcast, Klugman received thousands and thousands of letters, but he sent them all to Meyers. Some of the notes were from people with rare diseases, and others were from people who just wanted to do something to help solve the orphan drug problem. Bolstered by this outpouring of support, Meyers and her colleagues rallied for another congressional hearing.

On March 10, 1981,  elected officials heard testimony to support a real-life bill that would create financial incentives for pharmaceutical companies to take on orphan drugs. And this time, thanks to the star power of Jack Klugman, the hearing was standing-room-only.

The Fake March on Washington

In the climactic scene, Quincy confronts the senator in his D.C. office. And just as the senator is proclaiming his opposition to the orphan drug bill, he looks out his window and sees hundreds of people demonstrating in the street, demanding for a solution to the problem of orphan drugs. These extras were all actual people with rare diseases and disabilities whom Meyers and her colleagues assembled.

On the show, this march on Washington works immediately and the senator caves right away. Shortly after this episode aired, the real-life senator caved as well. Meyers believes “there would not be an orphan drug act if it was not for that episode of Quincy.” 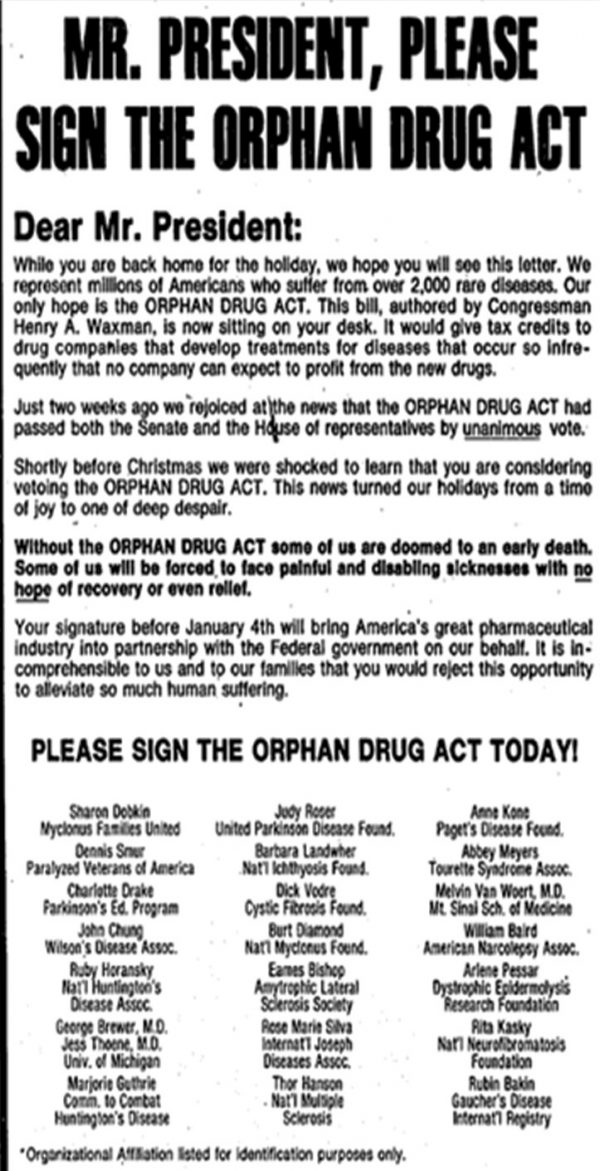 The Orphan Drug Act passed the Senate, President Ronald Reagan signed it into law and, to this day, some activists think of the fake march on Washington as a real-life event.

Abbey Meyers went on to help start a new advocacy group, the National Organization for Rare Disorders, which she ran for more than 20 years.

The Orphan Drug Act of 1983  mandated that when the FDA designates a proposed treatment as an “orphan drug” (e.g. treats a condition that affects fewer than 200,000 people), the developer of that drug qualifies for special incentives, like subsidies for clinical trials. The biggest incentive, however, is that the first drug company to receive FDA approval for a certain type of treatment gets market exclusivity. Basically, that one company gets a monopoly on the drug and no one else can market an equivalent drug in the U.S. for seven years. 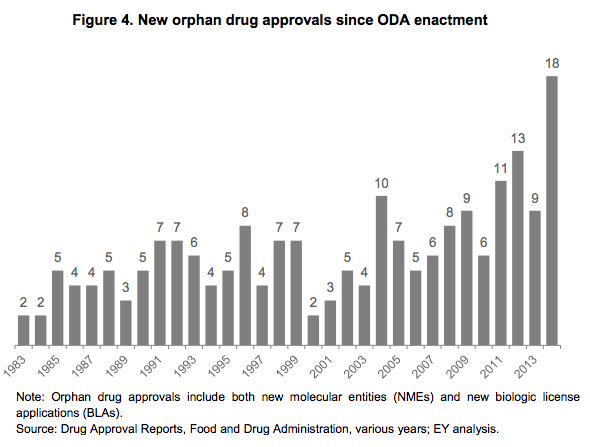 During this seven-year period, drug companies have the opportunity to make money off this disease, even if relatively few people have it, by charging whatever price they want.

In the case of a rare disease, companies can’t make money if they charge normal prices. Once drug companies realized that they could get a monopoly they also began to understand they could charge whatever they wanted, especially if the insurance companies were paying the bill.

It took pharmaceutical companies a few years to catch on to how lucrative the Orphan Drug Act could be, but by the 1990s things were definitely rolling. In 1991, one rare disease drug came out with a price tag of $150,000 a year — a lot of money.

In the 90s, Joshua Schein was a young man with an MBA and a Ph.D. in neurobiology working on Wall Street. In 2003, Schein started a company called Lev Pharmaceuticals, which would do one thing, and one thing alone: Lev was going to market a drug for a rare disorder called hereditary angioedema. The drug already existed in Europe and had been used successfully for 30 years, but nobody had taken it through clinical trials in the U.S.

In order to bring this treatment from Europe to the U.S., Lev Pharmaceuticals would have to raise enough money to run clinical trials for FDA approval. This would be a lot easier to do as a publicly-traded company. And that is what brought Schein to Fun City Popcorn. 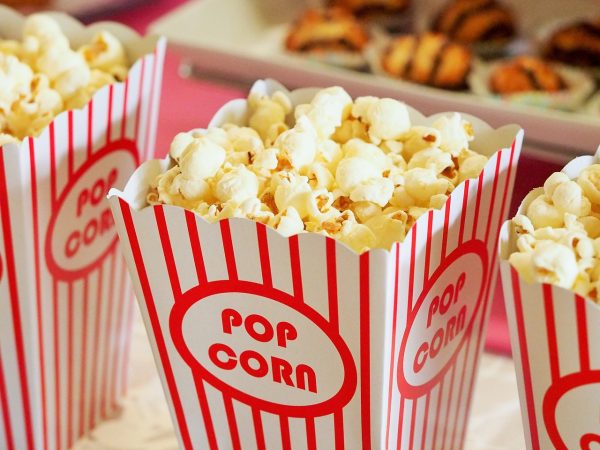 “You know, it’s not a typical path and that’s not a typical name for a biotech company,” said Schein. Fun City Popcorn sold popcorn and nacho cheese sauce to concessionaires all around Las Vegas. They had hundreds of clients, including malls, ballparks, and skating rinks, but the company’s owners were looking to get out of the popcorn business, and they were game to try something new.

Of course, Lev didn’t approach Fun City for their nacho cheese sauce recipe — they were looking for an investor. Fun City agreed to actually merge with Lev Pharmaceuticals, thus bestowing on Lev their status as a publicly-traded company. Which made it easier for Lev to attract even MORE investors.

Over the next few years, Lev Pharmaceuticals raised about $75 million to pay for the clinical trials that would win FDA approval. In 2008, a couple of weeks before the FDA gave the new drug its final stamp of approval, Lev Pharmaceuticals sold for $442 million. Within a few years, the new owner was making $400 million back from this one drug every year. That owner then sold itself to an even bigger company for $4.2 billion. That company’s CEO says his company’s entire strategy is to make money from treatments for rare diseases.

Abbey Meyers has mixed feelings about her legacy. “Thirty to thirty-five years later, the Orphan Drug Act has been responsible for the most miraculous treatments in many diseases,” she says, “but it’s also been a major economic problem because some of the companies that make these drugs have put a price on them that make the drugs absolutely unaffordable.” 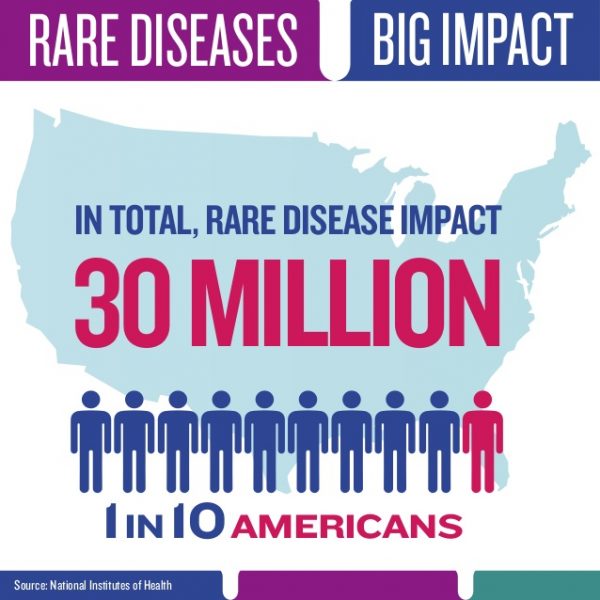 To Meyers, the Orphan Drug Act has been a bit like a ransom note for thousands of desperately ill people. Joshua Schein from Lev Pharmaceuticals has a different perspective. He thinks it’s hard enough to get money to develop these drugs, even with the Orphan Drug Act’s incentive of a large payout.

If you look at a list of the most expensive drugs, you’ll notice two things: they are unbelievably expensive (some are tens of thousands of dollars a month), and they are generally for rare conditions. Whoever pays an individual bill, whether it’s insurance companies or patients, it all contributes to the spiraling cost of health care.

This piece was reported by Dan Weissmann for the podcast An Arm and a Leg and adapted for 99% Invisible by producer Avery Trufelman.