It is extremely challenging to design something both to be sturdy and durable enough to survive a rocket launch but also able to be detonated on demand. But as a vessel travels up out of our planet’s atmosphere and heads into space, that is just what is needed — a lot of moving parts that have to function then gracefully fall apart just right.

In principle, explosive bolts are a bit like breakaway bolts, (which hold up signposts, street lamps and telephone poles, but need to break apart on impact). But at least with those, testing is easy enough and there are many terrestrial opportunities to review performance on the ground. Explosive bolts, meanwhile, need to be even stronger and more certain to break.

As Ryan Bradley explains in an article for Popular Science, these bolts are violently shaken during tests, but that step is “merely the beginning, intended to simulate the ­violence of a launch. The parts also brave hammering, baking, and freezing—24 tests in total.”

Pyrotechnic fasteners are used at multiple stages of space missions, helping to shed parts of larger crafts to the point where only a fraction of a percent of a typical ship actually returns to Earth’s atmosphere. Anyone who has watched a launch video has seen this in action when initial boosters are violently jettisoned and other parts fall away. The bolts, meanwhile, have to hold on for the ride, then cut loose just right.

“Preparing these bolts for their pivotal moment—their perfect failure—presents as a kind of Zen koan,” reflects Bradley: “How to fully test a thing that works exactly once? How do you design something that, in order to do its job, must fail?” The short answer is: lots of testing. 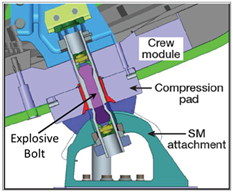 In a space mission, so many things have to go right, and so many things can go wrong. A few notable historical failures have been traced to pyrotechnic connectors failing to break at the right time. There are alternative methods of detachment, too, but these are generally slower and fractions of a second can count during critical maneuvers. Testing is key, but so is redundancy — sometimes, secondary bolts (or alternate failsafe mechanisms are added) should the primary ones fail to function. NASA doesn’t like to take chances.

Finally, even once they have shattered, the bolts themselves need to avoid causing problems, like becoming fast-moving space debris. Some pieces that remain attached can serve a secondary function, too, forming part of a reentry vessel’s heat shield as it returns to Earth.

Previous Episode: Rounding Down: 40+ Popular Stories From the First 10 Years of 99% Invisible
Next Episode: Vandals One & Two: Guerrilla Caretakers Behind a Chicago Park’s Second “S”