In the wake of World War II, the government of France commissioned its most prominent designers to create a collection of miniature fashion dolls. It might seem like an odd thing to fund, but the fantasy of high fashion inspired hope in postwar Paris. These dolls also forever changed the curator who discovered them almost 40 years later, in a strange museum perched on a cliff in rural Washington state.

Articles of Interest is a limited-run podcast series about fashion, housed inside the design and architecture podcast 99% Invisible. Launched in 2018, the show encourages people to rethink the way we look at what we wear and what it says about us.

This second season of Articles of Interest features six interlocking episodes examining luxury and our collectively held ideas of glamour across the United States, from Chicago to Canal Street. Think of it like a podcast concept album, with recurring themes and threads that examine the ways we signal success and authenticity in America. 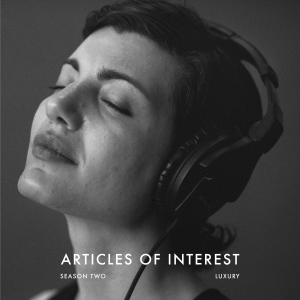 Articles of Interest was written and performed by Avery Trufelman, who spoke with Linda Tesner, Melissa Leventon, and Anna Goodwin for this episode. This season was edited by Chris Berube, scored by Rhae Royal and Sean Real, fact-checked by Tom Colligan and Graham Hacia; mix and tech production by Sharif Youssef with additional mixing by Katherine Rae Mondo; opening and closing songs by Sasami; photography by Austin Hobart and graphic design by Helen Tseng.

Special thanks to the whole 99pi team for support, insights, and edits, including Joe Rosenberg, Emmett FitzGerald, Vivian Le, Lasha Madan, Kurt Kohlstedt, Delaney Hall, and Katie Mingle. And Roman Mars is the true fantasy of this whole series.