You see them on street corners, at gas stations, at shopping malls. You see them at blowout sales and grand openings of all kinds. Their wacky faces hover over us, and then fall down to meet us, and then rise up again. Their bodies flop. They flail.

They are men. Men made of tubes. Tubes full of air.

Beyond the streetscape, tube guys have popped up on TV….

You can even buy an inflatable tube man Halloween costume.

Depending upon your tastes, they are either full of ridiculous joyful exuberance, or the tackiest thing in the world.

A number of cities across the US have actually banned the use of tube guys. An ordinance in Houston enacted in 2008 proclaims that dancing a tube guy “contributes to urban visual clutter and blight and adversely affects the aesthetic environment.”

Some may seem them as visual clutter now, but they have ancestry in stunning works of Caribbean art.

The tube guy origin story begins with celebrated artist and “mas man” Peter Minshall. He made a name for himself in Trinidad & Tobago (and beyond) for his Carnival bands, featuring larger than life puppets which dance through the street to the beat of Calypso music.

In the early 1990s, Peter Minshall had gained fans among members of the planning committee for the Olympics and in 1995, he found himself in a stadium in Los Angeles working with a bunch of different artists, trying out different ideas for the opening ceremonies for the Atlanta Games the following year.

As Minshall tells it, he was was trying to do something using inflatable tubes, but it wasn’t working. And then Minshall realized that if they were made to look like people, they would dance just like people did back home in Trinidad & Tobago — limpid, loose, and gracefully.

Minshall and his team had conscripted a Los Angeles-based artist named Doron Gazit to realize the vision of the tube guys (or, as Minshall calls them, “tall boys.”). Gazit was tapped for his experience working with inflatables, which he had done since his youth in Israel.

And so Gazit and Minshall’s tube guys made an appearance in the 1996 Olympic opening ceremony and that was the first the world had ever seen of these inflatable men. But how did they go from a thing we saw at the Olympics once — an art piece — to a thing you see at every used car lot in America?

After the Olympics, Doron Gazit applied for a patent for “apparatus and method for providing inflated undulating figures,” in 2001. He then began licensing its use through his company, Air Dimensional Designs.

This became a point of tension between Gazit and Minshall; Minshall had been unaware of Gazit’s intention to patent and monetize the inflatable figure. Gazit, for his part, says that he applied for a patent because he put a lot of research and development into making the “flyguys” (as Gazit calls them), and he was already starting to see other people people rip off his efforts.

These days, Gazit has mostly moved on from these figures, though he does continue to work with inflatables; you may have noticed his set design for Beyoncé’s 2013 Superbowl half time show.

However, Gazit’s company, Air Dimensional Designs, does continue to license its patent to various companies that manufacture and sell vertical inflatables. One such company is LookOurWay, which in addition to making “AirDancers,” also sells “Air Rangers.”

Turns out that vertical inflatables also make for good scarecrows. Farmer Gary Long, who helped develop the Air Rangers, says that bird damage in his orchard of honeycrisp apples went from 20,000 pounds a year—to zero.

If you want more Peter Minshall (which of course you do), here’s an hour of him on a Trindad & Tobago-based talk show.

Format site of the week: Star Wars by Thomas Dagg 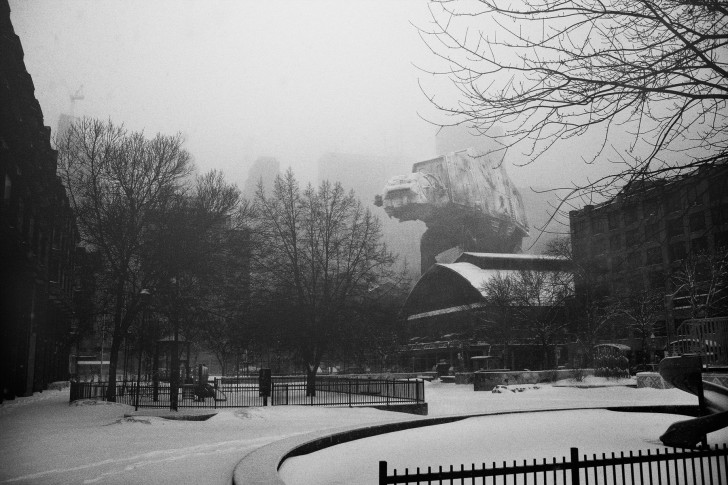 Previous Episode: And The Winner Is
Next Episode: There Is a Light That Never Goes Out