Most of the time, the posts holding up highway signs and street lights have one job: to stand up straight and provide support. Whether made of wood or metal, such supports have to be well-engineered to withstand winds, storms, tsunamis and earthquakes.

Every so often, though, these posts are called upon to do something crucial but fundamentally opposed to their primary function: when hit by a vehicle, they need to break in just the right way in order to help reduce vehicular damage and save lives.

One of the clever technologies employed to help posts break properly is known as a slip base system. Slip bases and other breakaway designs are all around us, supporting signs and other infrastructure.

Instead of a single post rise continuously up out of the ground, a slip base approach joins two separate posts via connector plates. This joint allows the pair to break apart at an intended juncture. A basic slip system is assembled as follows:

Breakaway points are generally located close to ground level. When the upper post is impacted, the plates slip and bolts sever (or pop out). This allows the above-ground piece get knocked out of the way while the vehicle passes over its underground counterpart. 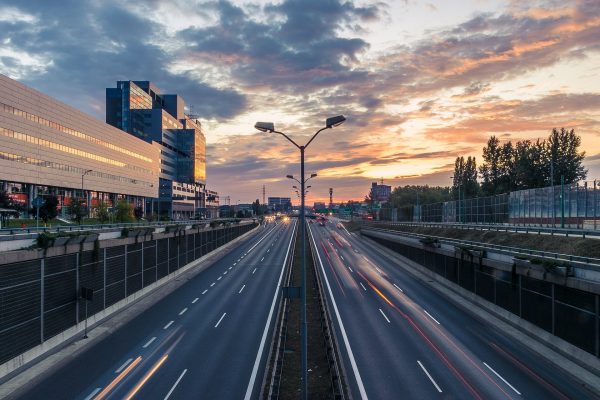 During a crash, breakaway systems like these can greatly reduce damage to cars and their occupants, helping save the lives of drivers and passengers. After a crash, these systems also make subsequent infrastructure repair easier as well: in many cases, a new upper post can simply be bolted onto the undamaged base post below.

The critical plate-to-plate connections underpinning slip systems can be subtle. The joints are sometimes hidden beneath street-level base covers but are often clearly visible (even if they go unnoticed by most):

The specific slip system shown above involves tilting the joined plates at angles (generally 10 to 20 degrees relative to the ground). The design of these inclined slip bases is optimized for hits from an assumed direction of impact. Instead of simply sheering sideways, angled-base posts are actually launched up into the air, causing them to pass over the impacting vehicle when hit straight on.

Slip bases paired with with hinged upper connections can also help preserve infrastructure, like telephone lines running along the tops of utility poles (as shown above). They can also let cars zip under two-post signs with fewer complications (as shown below) .

Still, slip base systems have their limitations. Inclined slip bases, for instance, work best if the direction of impact is known or can at least be assumed. They can work along the sides of divided highways but are problematic in traffic medians between lanes. If hit at an unexpected angle, they may not break as planned. Even omnidirectional (non-angled) systems reflect a built-in assumption of relatively horizontal impacts. These may not work properly if hills are involved or if a given crash is more complex.

Many slip systems also rely on installers properly torquing connector bolts. If the bolts are too loose, a strong wind could push over a post. If the bolts are too tight, the plates may be prevented from slipping and bolts may thus fail to snap when it should. Moreover, bolts that are too loose or too tight may prevent slip systems from performing another critical function: slowing down the impacting vehicle. Physics professor David Kohlstedt explains the key forces in play:

“Shear is the force (and stress) that you get when you place you hand flat on a table and force it to slide parallel to the table. The other force in play is a normal force that you get when you slam your fist into the wall. Both are important in this case … the shear force causes frictional dissipation of energy, while the normal force causes the bolts to fracture and the sign to go flying.”

In short: a well-implemented slip system can use normal force to facilitate the breakaway action while also using shear force to slow a crashing car. Proper bolt torque allows these forces to perform as expected. The skill of the installer thus becomes a critical part of the equation and a potential point of failure for the whole system.

These days, an increasingly common approach to solving both directional and torque problems involves using things like a breakaway bolt, which is an engineered element designed to fracture at a specific stress point. The ability of these bolts to break properly depends less on the direction or angle of impact. Breakaway bolts also take pressure off of the installer, since proper torquing is no longer the critical factor in making (or breaking) the critical plate-to-plate connections.

Slip bases aside, different kinds of breakaway approaches can be found all over the built environment. Many of the world’s ubiquitous stop signs, for instance, are supported joined metal posts. The joint is different, but the idea is the same: two posts that break apart. An in-ground post is matched with an above-ground insert post, the latter of which is designed to bend or break on impact (as shown above).

People tend to think of their cars as the critical factor in keeping them safe on the roads. Quality wheels provide traction, sturdy frames resist damage and safety glass is designed to break into less-harmful shards.

However, car design and construction is just one side of a larger design equation. The engineering of things people crash into, from other vehicles on the road to roadside infrastructure, plays a less obvious but nonetheless critical role in road safety as well.