Connecting Hurricane Gulch and Talkeetna (a remote stretch of the Alaska Railroad between Fairbanks and Anchorage), Hurricane Turn may be the only remaining true “flag stop” passenger train in the U.S., braking only where needed to pick up or drop off riders.

Rather than using scheduled stops at designated spots, anyone wanting a lift anywhere along the route can approach the tracks and wave a white flag to request a ride. On this stretch, the train has just two locomotives, two passenger cars and one baggage car, making it easier for its operators to stop and start on shorter notice. 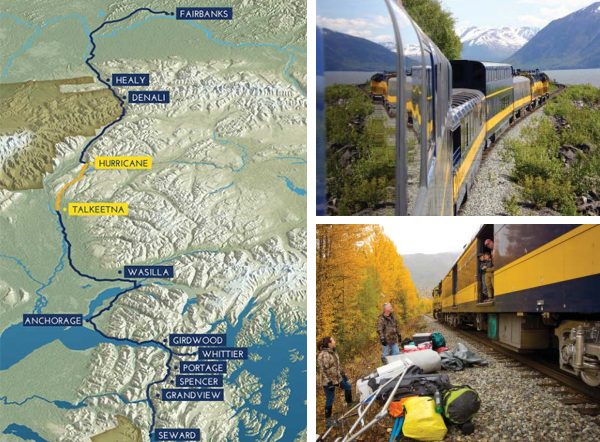 “It’s a train like no other,” boasts Alaska Railroad — the line “leaves civilization behind and makes a round-trip journey through the wilds of the Indian River Valley. Along the way, passengers may take advantage of the Hurricane’s unique flagstop service to get on or off the train anywhere along this backcountry route.” Locals use it to get to cabins or access favorite hunting and fishing sites. Passengers are encouraged to bring their own meals or buy to-go lunches at the endpoints.

In the lower 48, “whistle-stop” tours (generally associated with political campaigns) have a long history. From FDR to Ronald Reagan, and as recently as George H. W. Bush and Barack Obama, various U.S. presidents have traveled on trains, stopping to give speeches at various points along the way and often orating from onboard platforms.

While true flag-stop systems have become rare in the United States, some Amtrak routes will still skip stops if they know ahead of time (based on advance ticket sales) that there is no need to make them — this strategy can help save fuel as well as travel time.

Such request-stop approaches may be more exceptional in the context of trains, but are familiar to most people from different forms of transit — many urban busses, for instance, will only stop to pick up or drop off a passenger (or to stay on their timetable). Some will also stop outside of official drop zones by request if they can do so safely.

Through the Motions: Japanese Rail Workers Point & Call to Promote…

Meanwhile, other transportation networks around the world use variations on this basic idea, too. Along ferry routes in the fjords in Norway, for instance, some “signalanløp” stops are equipped with a light which embarking passengers must switch on to signal a ferry for pickup. Other Norwegian ferries are flagged down using semaphore.

Following the reunification of East and West Germany,... [Read More]

Botanical Imperative: Why Cellular Network Towers Get Disguised as Trees