From U.S. Routes and Interstates to state and county roads (each with different signage and numbering systems) highways in the United States can be daunting. But there is beauty within that complexity, particularly at the intersection of state, country and territory signs.

The United States Numbered Highway System (also known as U.S. Routes or U.S. Highways) forms a nationwide grid that dates back to 1926. Route numbers and locations are coordinated by the American Association of State Highway and Transportation Officials.

The Interstate Highway System (officially called The Dwight D. Eisenhower National System of Interstate and Defense Highways) is a more recent network of controlled-access highways that forms part of the National Highway System in the United States.

Dating back to 1956, the network took decades and a half-trillion dollars to build out — today, it spans around 50,000 miles and supports about 25% of U.S. vehicular traffic. Some planned routes were never completed, in part due to highway revolts in cities where local citizens were concerned about issues like neighborhood destruction, increased traffic and environmental impacts. 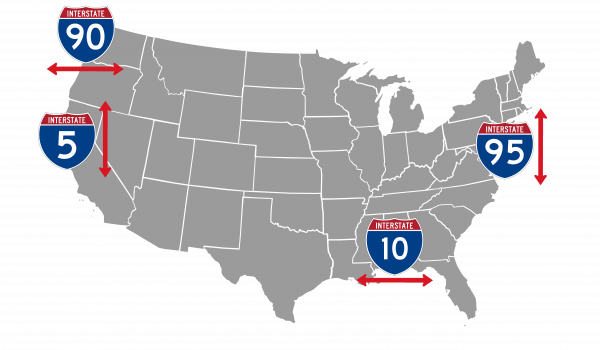 Numerically, odds run north/south and evens east/west, though the numbers increase in the opposite way with respect to the U.S. Highway system, starting in the south and west and going up. Mile marker numbering usually starts at the western or southern edge of a state. In rare cases, these can also split, as with 35W and 35E in MN and TX. 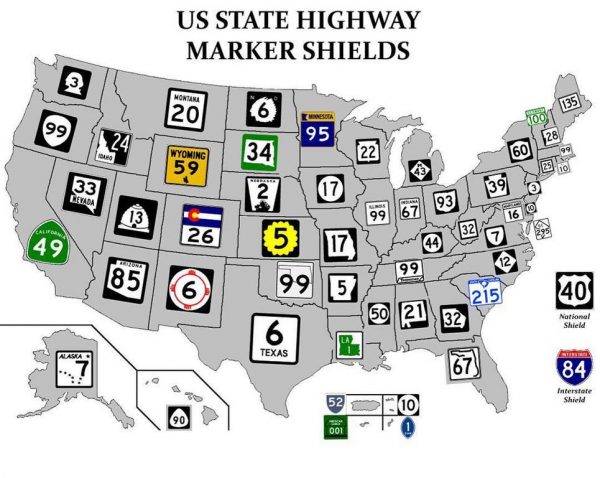 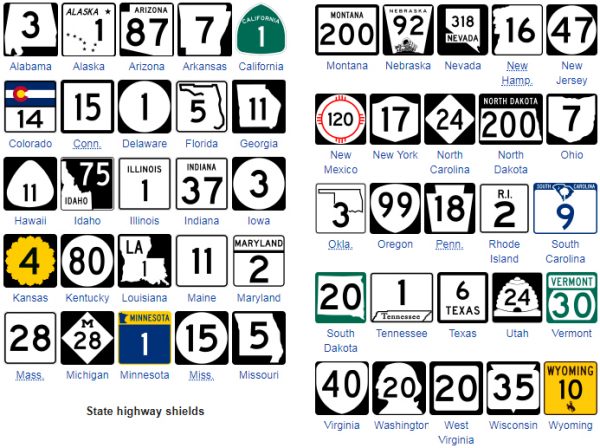 Some shields, as in Colorado, fully integrate relevant regional graphics like the state flag. In other cases, like Alaska, New Mexico and South Carolina, individual flag elements are incorporated. Pennsylvania’s shield references the state’s nickname (the Keystone State) while Washington’s features the silhouette of America’s first president. Arizona, Nevada, Idaho and others show the outline of the state itself in varying detail. Still others feature simple geometric shapes, like the circles found in New Jersey, Kentucky, Mississippi, Iowa and Delaware. 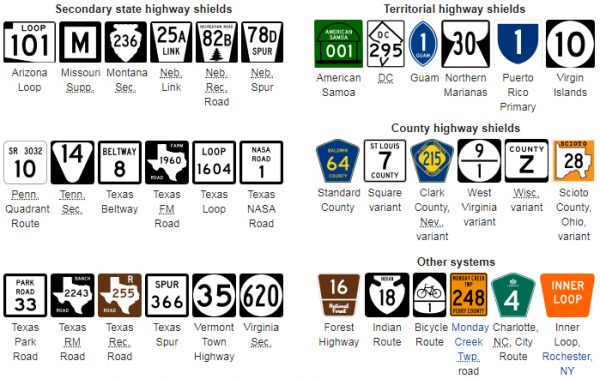 Some states also have secondary highway systems to supplement the main one, usually for a specific purpose, like farm-to-market roads in Texas and connecting links as well as recreational highways in Nebraska. A Missouri subsystem was created to provide access to most farm houses, schools, churches, cemeteries, and stores within the state. Territorial markers in American Samoa, the District of Columbia, Guam, Northern Mariana Islands, Puerto Rico and the U.S. Virgin Islands all have different shapes and colors as well.

These designs are not static, either. Many have changed over the decades (note: not all of the 1940s-era examples above were actually black-and-white, though overall the shields did feature less color). Some have retained their essence over time, but others, like New Mexico and Minnesota, have been radically revamped.

Tricky Business: Appearing on Blue Highway Exit Signs is Harder than it…

Meanwhile, if you’ve ever wondered about how those highway-side business signs work, and what it takes to get on one, check out the guide above. And for a crash course at the smaller end of the scale, explore local streets, avenues, ways and lanes in the guide below, which explains different types of roads and what they all mean.

Beyond Streets & Avenues: Simple Visual Guide to Different Types of…

The Seven Bridge Problem: How an Urban Puzzle Inspired a New Field of...

The story starts with the mayor of a... [Read More]