In another timeline, some alternate city of San Francisco is filled with iconic structures by Frank Lloyd Wright, including his first skyscraper (designed for a prominent downtown location along Market Street) and the Butterfly Bridge, stretching across the water to Oakland. 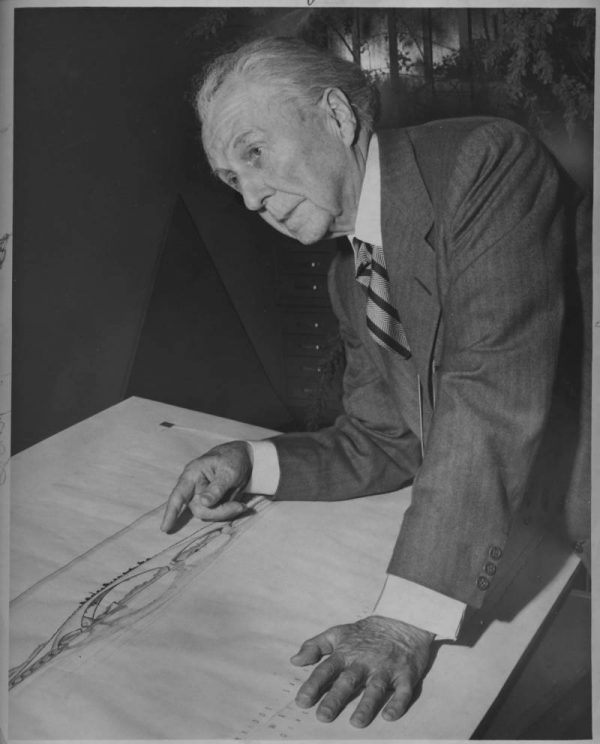 After the San Francisco-Oakland Bay Bridge was built, it quickly became clear that traffic would clog this key piece of infrastructure. For a time, the idea of a second bridge was considered to solve congestion. As plans for an underwater Bay Area Regional Transit (BART) tube began to evolve, this additional bridge idea was put on hold indefinitely.

But before the Transbay Tube (above) came along, Wright pitched an inspiring design to bridge the Bay. “It would have been brilliant,” architecture student Duncan Keefe told Bay Curious, “and I think it would have been very influential — and possibly changed the course of how other bridges subsequent to it would have been designed.”

In the late 1940s, Wright’s friend and engineer, Jaroslav Joseph Polivka, suggested he pitch a design solution for a second Bay bridge. Wright dubbed it the Butterfly Bridge, inspired by the thorax and wings of these beautiful flying insects. It would support six lanes of traffic but also two pedestrian walkways, and a central “hanging garden.” Cars and people would stop midway to enjoy the landscape and views. Lush greenery would also be partially visible to boats passing below.

The design had its issues. Structurally and aesthetically, it was very daring and unusual — no one was quite sure how it would actually be engineered and built, let alone paid for. And after Wright’s death, the project lost its already limited momentum, particularly as the Transbay Tube and San Mateo Bridge began to meet regional traffic demands.

Some people still talk about building another bridge across the Bay, but critics say the pressing need is not to build more space for cars, but instead for pedestrians, cyclists and public transit.

Although Wright designed dozens of structures for the Bay Area, only a handful were constructed, and a bridge was not among them. Still:

In what would make for an incredibly obscure trivia question, Frank Lloyd Wright’s Butterfly Bridge also has a cameo in the original Die Hard @99piorg https://t.co/FrKD2Hm1l9 pic.twitter.com/XZESr52AhQ