The popularity of “love locks” can be traced back to the story of a schoolteacher named Nada and an army officer named Relja in the small Serbian town of Vrnjacka Banja. The couple pledged their love to one another while standing on a local bridge before Relja went off to fight in World War I. While battling Germans in Greece, however, Relja found a new flame and married her instead. Nada, as the story goes, died from grief in the wake of this betrayal. [Note: This piece was adapted from the NYT best-selling book: The 99% Invisible City].

A tradition was born of this tragedy: local couples began to etch their names onto locks, attach them to the bridge and throw the key into the water, a symbolic and public act sealing their commitment to one another. When the poet Desanka Maksimović heard the story, she memorialized the tale in a poem that would spread the practice.

Today in Vrnjacka Banja, metal railings along the “The Bridge of Love” are covered in loads of padlocks of different shapes, sizes, colors and materials, engraved or otherwise marked with names, dates and messages. The practice has spread around the world, as well. Love locks can be found on bridges, walls, fences and monuments, particularly in famously romantic cities like Paris, Rome and New York.

People love love locks, but cities are often a bit more on the fence about them. In the Australian capital of Canberra, love locks were removed in 2015 for fear of weighing down a bridge; later that year in Melbourne, 20,000 locks were clipped and stripped from a bridge when cable wires began to sag under the extra weight.

In Paris, the Pont des Arts bridge struggled under the burden of 700,000 locks until authorities began removing entire mesh railing panels covered with them. Here and elsewhere, acrylic and glass panels have been installed to foil the placement of additional locks.

What began as a simple gesture of romance has become a global (if sometimes controversial) activity. In some cities, love locks are considered vandalism and if lovers are caught affixing them, they may be greeted with a fine. In other places, locks are actively encouraged, with structures have been specially built to support them. 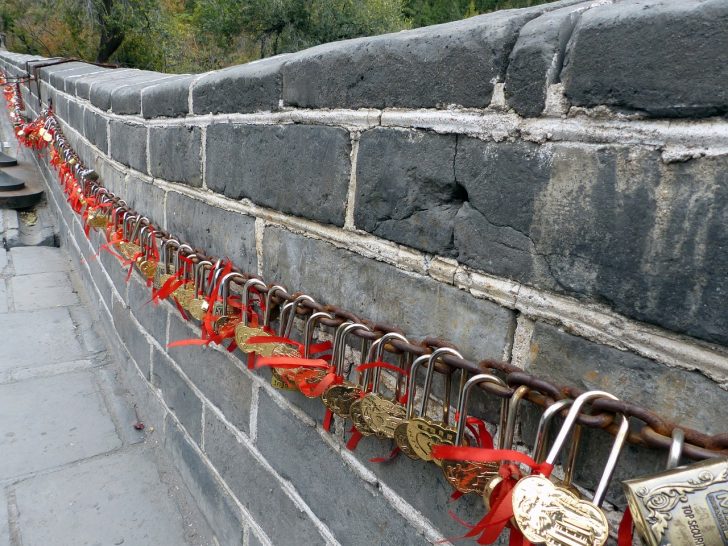 There are dedicated chains for affixing locks of love strung along parts of the Great Wall of China, for instance — indeed, some believe that love locks have their roots in Ancient China, not modern Serbia.

Meanwhile, in Moscow, fake metal trees were put up next to a popular bridge to give people an alternative place to attach locks. Approaches like this echo the treatment of graffiti in some cities, where special mural-making walls are presented as alternatives to illegal vandalism. Like kissing the Blarney Stone in Ireland or sticking a wad of gum on a rather gross wall in Seattle, putting up a lock may seem like a novel lark, but when a lot of people line up to do the same thing, such traditions can weigh on cities and lose their romantic appeal.

In The 99% Invisible City: A Field Guide to the Hidden World of Everyday Design, New York Times bestselling authors Roman Mars and Kurt Kohlstedt uncover engaging stories like this about all the thought that goes into cities that most people don’t think about. Over the course of 400 pages and 100+ illustrations, we explore the origins and other fascinating tales behind power grids, fire hydrants, street signs, safety patterns, and so much more. If you enjoyed this piece, be sure to check out the book as well!

Previous Episode: Free Universal Construction Kit Connects All Kinds of Modular Construction Toys
Next Episode: I Voted: A Brief (and Contested) History of Election Day Stickers in the US