Buried in a 1971 edition of the New York Times lies a letter to the editor in which the author recounts catching, cooking, and eating a three-pound carp in the basement of a Manhattan building. “We had a lantern to pierce the cellar darkness,” he wrote, “and fifteen feet below I clearly saw the stream bubbling and pushing about, five feet wide and upon its either side, dark greenmossed rocks.” [Note: This post was adapted from a story in the NYT bestselling book: The 99% Invisible City]. 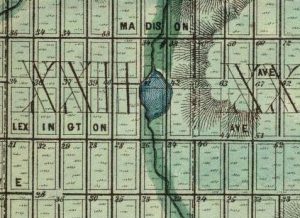 Whether that particular fish story is true or apocryphal, hundreds of waterways do indeed crisscross the ground under Manhattan’s gridded blocks, legacies of a historical landscape both surrounded by and infused with water. Paved in the early 1800s, Canal Street’s name reveals the route’s origins over a former waterway. Even the great Empire State building sits close to the site of what was once Sunfish Pond, one of hundreds of water bodies that spanned the city. Though this historical home to squirming eels has long since vanished, an old feeder stream still forces the skyscraper above to use pumps that actively mitigate basement flooding — but this inconvenience is mainly superficial. There are deeper issues. 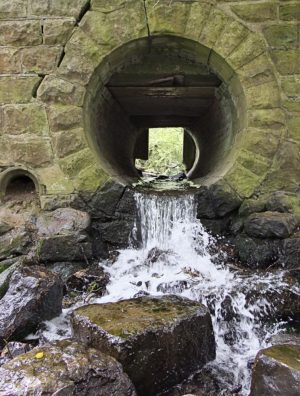 “Across the country, buried beneath the pavement you walk on, an invisible network of waterways flows through the darkness,” writes Brynn O’Donnell, a freshwater ecosystem scientist studying urban biogeochemistry. “These are ghost streams, and they’re haunting us.” Burying urban streams is a strategy as old as cities. Often, waterways are co-opted to become part of drainage and sewage systems. In some modern metropolitan cores, up to 98% of urban streams have been pushed underground and built over. But waterways are critical for healthy cities. “Streams typically teem with life: algae, fish, and invertebrates,” explains O’Donnell, species which in turn are helpful in managing pollutants and mitigating negative impacts to downstream bodies of water. But waterway ecosystems need light and air for their occupants to thrive and for them to be of use to other creatures.

Some cities have taken to “ripping up pavement, shattering pipes, and hammering away the concrete to exhume ghost streams,” notes O’Donnell. “Daylighting, as the procedure is called, opens the streams up to the sun and restores the adjacent land connection.” Unearthing streams is challenging and expensive, but nonetheless ultimately an important step in balancing local ecosystems — not just for humans, but also for other critters who live around, among, and beneath us.

In The 99% Invisible City: A Field Guide to the Hidden World of Everyday Design, New York Times bestselling authors Roman Mars and Kurt Kohlstedt uncover engaging stories about built environments like this one. If you enjoyed this piece, be sure to check out the book as well!

Free of Parking: Cities Have a Lot to Gain from Recycling Car-Centric

Cars are made to be driven, but they... [Read More]

For decades, Seattle planners have been exploring a... [Read More]