Standing on the sidewalk in Manhattan’s financial district in the shadows of glass skyscrapers, it is easy to forget how close you are to the water. But just a few blocks away, there are docks, and sea gulls, and ferry boats ready to take you island hopping.

When Hurricane Sandy hit in 2012, New Yorkers were forced to confront their proximity to the ocean. The storm surge inundated neighborhoods throughout the city.

Seawater poured into the streets, flooding out apartment buildings and filling the subway tunnels. As the waters rose, the distinction between low and high ground suddenly became very apparent. As Paul Greenberg, author of American Catch, explains that “nothing acquaints you with your city’s topography like living it in the eye of a hurricane and feeling that water flow up and rise up and start to swallow the city.”

Hurricane Sandy took the lives of over 100 people in the United States and caused around 50 billion dollars in damages. And the devastation it caused can be traced in part to global warming. Scientists have calculated that 83,000 more people were flooded out because of sea level rise than would have been otherwise. And pretty quickly politicians began talking about climate change.

“There is a wake up call here and there is a lesson to be learned” said governor Andrew Cuomo in the aftermath of the storm. “There is a reality that has existed for a long time that we have been blind to, and that is climate change, extreme weather, and our vulnerability to it. It’s undeniable that the frequency of extreme weather conditions is up. So it’s going to be a rethinking [and] redesign of how we protect this metropolitan area from this increased frequency.”

Architects and engineers are considering all kinds of different ways that cities can redesign their infrastructure to prepare for climate change. There’s talk of floodgates, and massive seawalls that would stretch across the entire harbor. But Paul Greenberg says that one of the solutions for New York’s future might lie in its past.

New York was built at the mouth of the Hudson River, and that fertile estuary environment was filled with all kinds of marine life. But one creature in particular shaped the landscape: the oyster. It is estimated that trillions of oysters once surrounded New York City, filtering bacteria and acting as a natural buffer against storm surges. 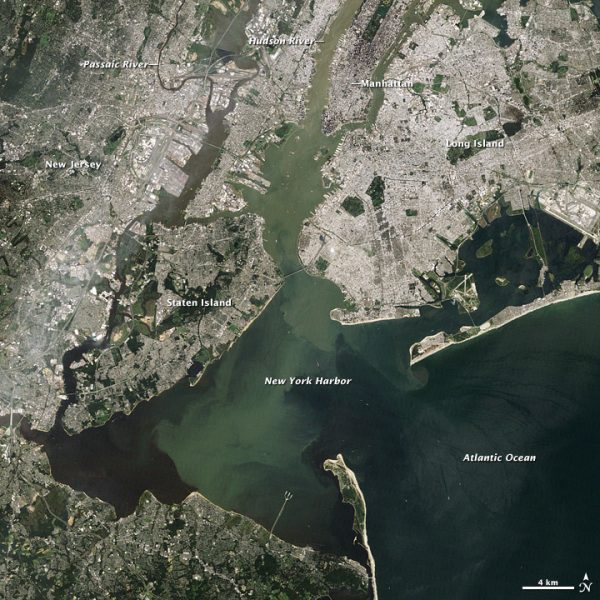 Oysters are unusual mollusks in that they build up structures in three dimensions, constructing underwater architecture layer by layer. The result is massive, complex reef structures (a bit like coral reefs).

Oyster reefs once covered over 220,000 acres in Hudson River estuary and sometimes grew as high as 20 feet tall. Like coral reefs, they cut down on coastal erosion and provided habitats for all different kinds of fish.

Much as coral reefs help protect many tropical islands from hurricanes, oysters protected New York City. They broke up large waves before they could crash onto the shore. And below the surface, their rough texture would increase friction and slow down the water. 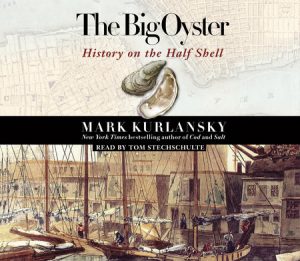 Most people don’t associate New York City with oysters today, but back in the 1700s the city was famous for them. Before colonization, the indigenous Lenape people ate lots of oysters. When Dutch colonists arrived, they found they “could just walk down to the shore anywhere in lower Manhattan where everybody was living and break off a few oysters to eat,” says Mark Kurlansky, author of The Big Oyster. 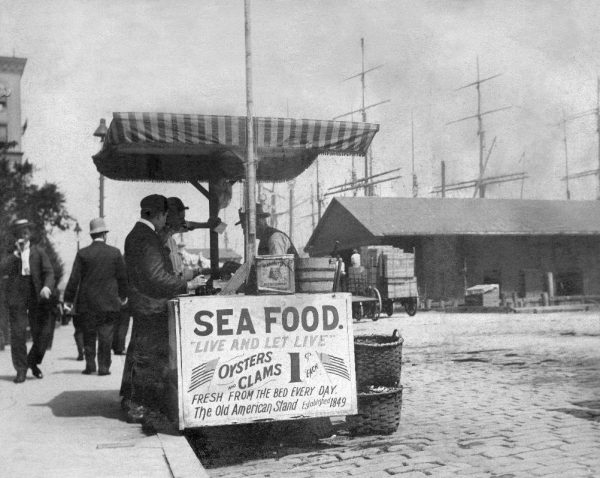 It was food for rich and poor alike, he explains, sold by street vendors and fancy restaurants and served in all kinds of ways.

Huge piles of discarded shells stacked up in the water and on the streets outside of shucking houses and restaurants.

As the city developed, builders used oyster shells as a construction material. They were burned for lime and ground up to create mortar — they were even used to pave streets. Pearl Street got its name from being paved with crushed shells. 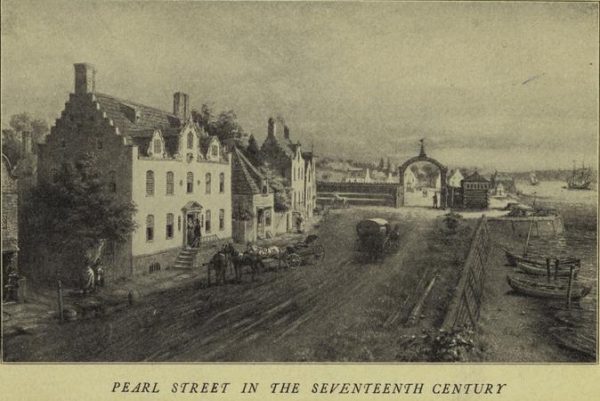 The demand for oysters was so great that it eventually outstripped New York’s bountiful supply. By the mid 1800s the area’s natural oyster population was almost entirely depleted. But that wasn’t the end of the the Big Oyster. Oystermen began farming oysters in the shallows of the harbor, and by the 1880s the city was producing over 700 million oysters per year. 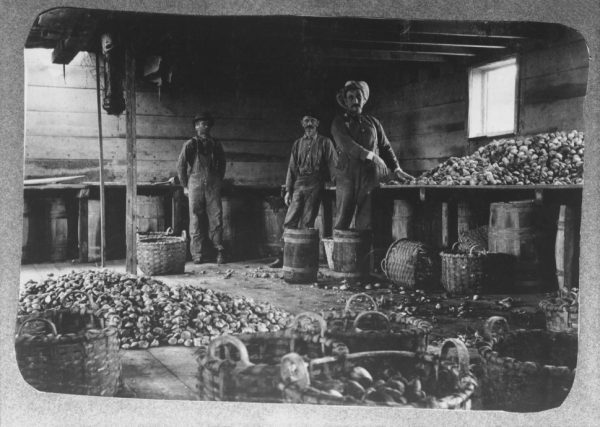 Still, there was a problem lurking in the water. For years, the city had been dumping industrial pollutants and sewage straight into the harbor without a second thought. Then, in the early 1900s, New York was hit with deadly outbreaks of Cholera and Typhoid, epidemics which public health experts traced back to oyster beds. 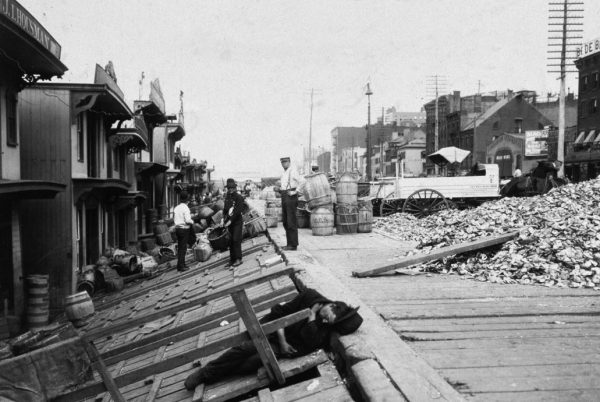 The city was forced to put a stop to oystering, and New York closed its last remaining bed, off the southern edge of Staten Island, in 1927. Water quality continued to deteriorate until oysters could no longer survive. By the middle of the 20th century, New York’s world-famous oysters were all but gone, leaving the sea bottom barren and the city exposed.

Pollution continues to be a problem in New York, but in 1972 Congress passed the Clean Water Act, which regulated the waste being dumped into waterways. Little by little, water quality in the harbor has improved, and now many different groups are trying to bring back the New York oyster. There are many obstacles to oyster restoration, including FDA rules that make things difficult and a lack of oyster larvae. But one of the biggest challenges is actually a structural one — the physical landscape of the harbor has totally changed due to dredging. The harbor has gotten deeper, and has a flat muddy bottom.

Kate Orff, a landscape architect, founder of the Manhattan firm SCAPE and author of Toward an Urban Ecology, says that this environment is not conducive to oyster growth — “any oyster that lands on the bottom of the bay’s bed will then immediately be covered with silt.” The solution: “we need to lift those oysters off of the bay floor and provide substrate” they can attach to.

That challenge gave Orff the idea for “oyster-tecture.” The concept was to build giant nets made of fuzzy marine rope, and elevate them about a foot or so off the seafloor. These nets would then be seeded with oyster larvae and the oysters would be able to grow from there. 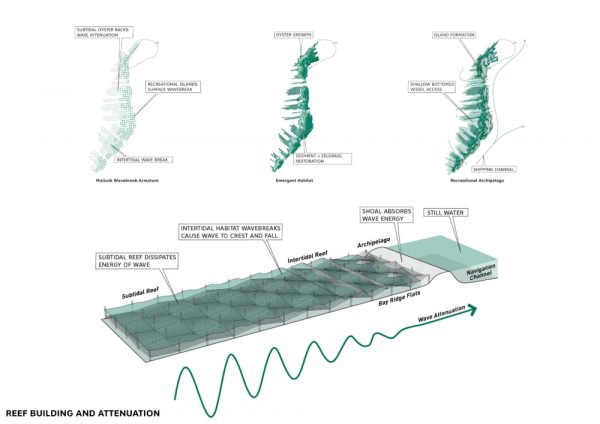 With a relatively small architectural intervention, a new piece of climate-proofing infrastructure could form: an artificial oyster reef. 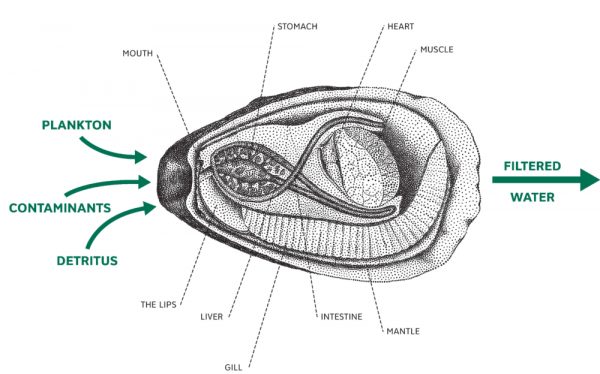 The oysters, which are filter feeders, would also help clean the water that passes through these new reefs.

If the oysters became a self-sustaining population, the structure could grow over time on its own. 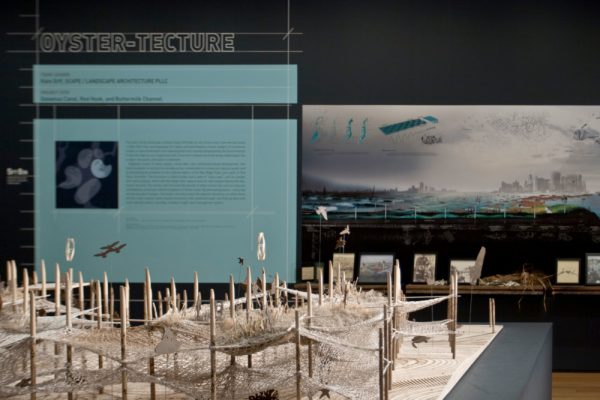 When Orff debuted her “oyster-tecture” designs in 2010 (as part of an exhibit at the Museum of Modern Art called Rising Currents), they were speculative designs that sparked a lot of discussion. But Hurricane Sandy brought new attention to sea level rise and opened new funding avenues for coastal resilience projects. 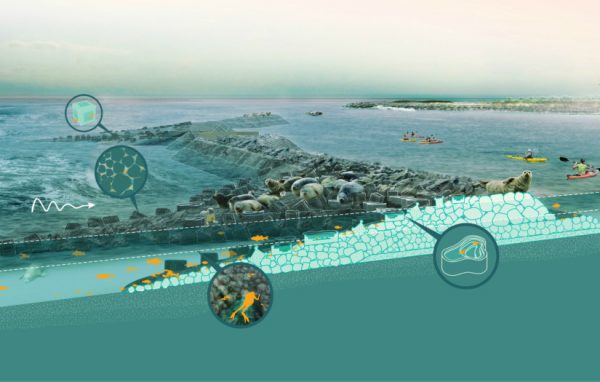 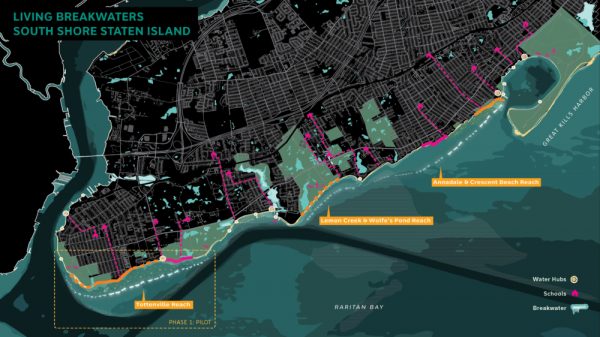 The project received 60 million dollars of funding and will be carried out by the New York Governor’s Office of Storm Recovery. Now SCAPE is in the process of designing artificial oyster reef breakwaters off the south coast of Staten Island, which was once an epicenter of the city’s oyster economy and was also hit particularly hard during Sandy.

The design has evolved a lot from the original rope-based proposal. The plan now is to build a necklace of offshore breakwaters out of large rocks and stones, and seed them with oysters so they grow into reefs. 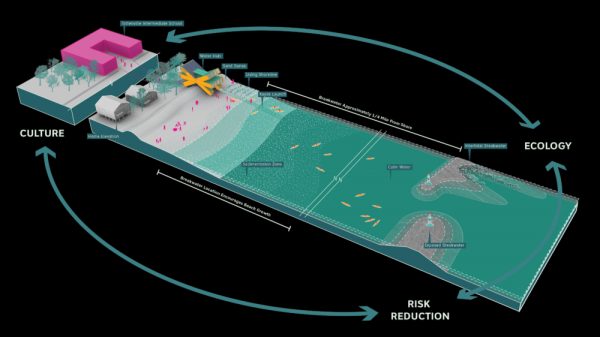 Much like a natural oyster reef, the Living Breakwaters are designed to  break up dangerous waves before they reach the shore. These will reduce coastal erosion, build beaches, and make storms less dangerous, but they won’t keep flood water out altogether. 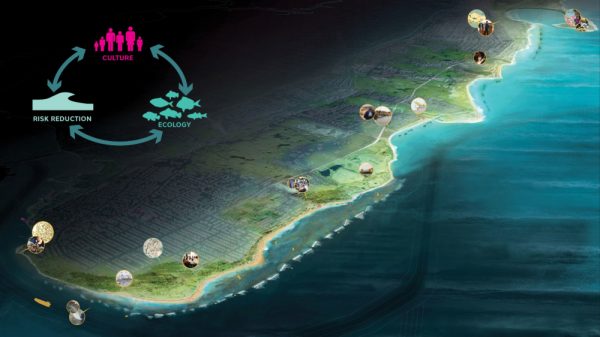 Sea walls are hard barriers that block the movement of water into the shoreline, but the landscape architects at SCAPE say that uncertainty around climate change makes designing a wall difficult. As seas continue to rise and storms become more frequent and more intense, it’s hard to predict exactly where a wall should be built and how high it needs to be.

Walls can also block natural flows of water through an estuary, and cut off humans’ access to the shoreline. So rather than trying to hold the line and battle the ocean, the designers want to slow the water down and let it through—creating a buffer zone of cleaner, calmer water along the shore.

This project also aims to enhance the coast by reviving its ecosystem. In addition to reducing waves and filtering water, the living breakwaters will provide some of the habitat that oyster reefs once did. With the help of marine scientists, the landscape architects designed pockets within the breakwater structure they call “reef streets,” that provide shelter for juvenile fish. Of course, to realize this vision, Living Breakwaters is going to need a lot of oysters.

The school also coordinates a program called the Billion Oyster Project, where students learn about the harbor through oyster restoration. Right now, they are growing millions of oysters on the island in big tanks. Program participants go around the city and collect shells from different restaurants (over 500,000 shells are discarded each week!). These shells provide a substrate on which they can grow oysters.

The Billion Oyster Project is an official partner on the Living Breakwaters project, meaning that oysters grown by New York high school students will soon be protecting Staten Island.

The New York Office of Storm Recovery is scheduled to begin construction of the Living Breakwaters project in 2018. The team will monitor their growth over time and hopes to have a robust reef system well underway by 2025. 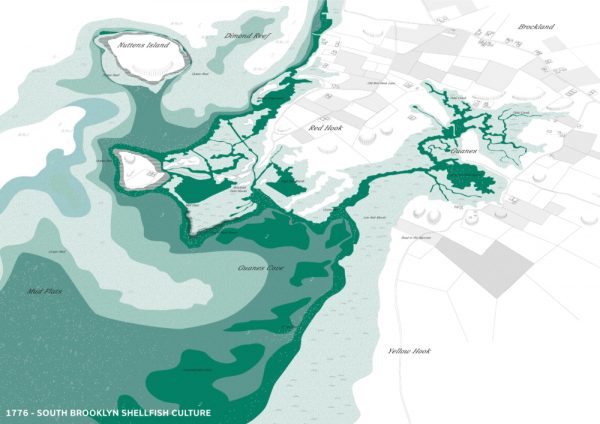 Even if successful, though, the project is not about returning New York harbor to the way it was before. No designer can do that. They are creating something totally new—part ecosystem, part infrastructure. And they hope the project inspires other architects and engineers to try and design landscapes for humans to better coexist with nature.

Historically, many infrastructure projects have been built to meet some narrow human need, often at the expense of the environment. “I think our changing world really requires a new approach,” says Gina Wirth of SCAPE. “We need to integrate ecosystem thinking into all of our engineered and infrastructural systems, all of our urban systems.” 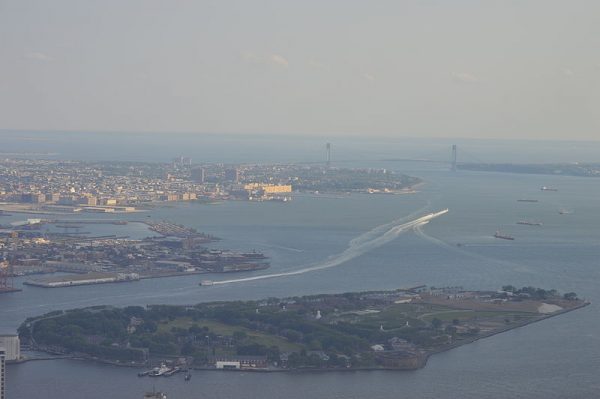 The landscape architects at SCAPE aren’t claiming that oysters can save New York from climate change. There isn’t any one solution to a problem so immense and complicated. Researchers at the organization Climate Central recently ranked New York as the most vulnerable city in the United States to sea level rise, with over 426,000 people living in zones that could face serious flooding by 2050. When you start projecting out further than 2050 the scale of the problem becomes hard to fathom.

Kate Orff sees the Living Breakwaters project as a step toward a healthier relationship between the city and the sea, but to protect New York and other coastal cities in the long term, she says there are a lot of other interventions that will need to be considered—like stopping new development along the coast, lifting existing buildings up, and eventually retreating from flood prone areas. Because New York is a city by the sea, and the water is only getting closer.