The westernmost part of Manhattan, between 34th and 39th street, is pretty industrial. There’s a bus depot, a ferry terminal, and a steady stream of cars. But in the late 19th early 20th centuries, this was cow country. 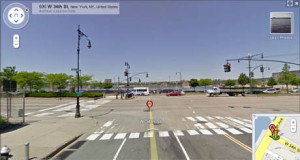 Cows used to be ferried across the Hudson River from New Jersey, herded across Twelfth Avenue (now the West Side Highway), and brought to this part of town to be made into beef. You’ve heard of the meat packing district. This was like the meat hacking district. It was nicknamed “Abattoir Place.” It was a hive of bone boilers and hide stretchers and lard renderers. There was a disassembly line for every single part of a cow. As more and more cows were ferried to the slaughterhouses in Manhattan, it became impossible for passing herds to to coexist with Twelfth Avenue traffic. Not only did the number of cows increase, but so too had the number of  carriages, and trains, and, eventually, cars. Cows were in the way. There were reports of epic cow jams on Twelfth avenue. That’s why people invented cow tunnels. Or at least the story of cow tunnels. At one point there might have actually been tunnels made expressly for cows to march underneath Twelfth Avenue to the abattoir. Or people might have just invented this crazy story about cow tunnels because everybody loves a good, vaguely plausible urban myth. We have tunnels for cars, for subways, electrical cables, and the internet. Could there be subterranean infrastructure for cows, too?

Writer Nicola Twilley first heard about cow tunnels in a book called Raising Steaks by Betsy Fussell. Fussell writes, “Traffic was so heavy in the 1870s that a ‘Cow Tunnel’ was built beneath Twelfth Avenue to serve as an underground passage. It’s rumored to be there still, awaiting designation as a landmark site.” Just that little mention. Nothing else. Thus began Nicola Twilley’s quest to figure out whether the cow tunnels ever actually existed.

Twilley found an article by Brian Wiprud, a utilities specialist for the structural engineering firm Weidlinger Associates. It’s Wiprud’s job to figure out how to get from point A to point B underground in New York City if, for example, Con Edison is cutting a trench for electrical cables. Wiprud investigates all kinds of anomalies they find underground when doing digs.  In 1997 Brian published an article in a  local newspaper called the Tribeca Trib.

Under the headline “Bum Steer,” Brian wrote about  talking to a Con Ed worker named Fred. (No last name given; just Fred). And Fred says he was watching a work crew install a new drainage basin downtown, nowhere near the site of those old slaughter houses. They dig and dig and finally hit this kind of wooden barrier. They break through it and it’s hollow. And then an old man from the neighborhood steps up and says, “Why I see you’ve found the cow tunnel.”

Wiprud asked around about the cow tunnel. He found that a lot of people had heard of it, but it seemed that no one was consistent on  (a) its location,  (b) what it was made out of (wood, brick, etc.), and (c) when it was constructed.

And even Wiprud realized that he was not consistent about how he told the story. Over time he began telling the story as if he had seen it himself—which, according to his own 1997 article, he hadn’t! With every telling of the cow tunnels story, the facts seem to bend.

So could their existence be proved?

Behold! A cow emerging from a tunnel! Could this be evidence? Yes—but not definitively. We can’t  see where the tunnel is located. And it’s an engraving, not a photograph, so artist interpretation is a factor. And the proportions are all askew—either the cows are giants or the worker is tiny.

From the final page of Faline’s report:  “An underground cattle pass was built and used by the Pennsylvania Railroad Company. It extended about 200 feet beneath 12th Avenue in the shoreline to the block between West 38th and West 39th Street. The tunnel was built in 1932 and may still be present.”

(Schneiderman clarifies that her report indicates that this tunnel was 200 feet long and beneath the avenue, not that it was 200 feet below the avenue). Schnedierman found a blueprint for the tunnel, indicating that it  was nine feet wide, seven feet high and probably ran between five and twenty feet below the street grade.)

And we know that this tunnel was actually built, not just planned, because it’s on other maps that were made of the area later.

Some people swear that it’s still  intact. Others have said that we might be able to find an entrance in one of the piers in one of the buildings without having to excavate the roadway itself. But this is all right next to the Javitz center and the Lincoln Tunnel. So If a cow tunnel was there was once upon a time, it was most likely pulverized during all of that construction.

In her research, Twilley found evidence for another cow tunnel at 34th Street—the one in the Harper’s Weekly engraving. A New York Times article from 1875 read, “There runs a tunnel under Twelfth avenue where the animals are brought into the shambles. In fact, the cattle are never seen by the outside public from the time of their landing until they are converted into beef.” It seems that may have been the  pivotal moment when Americans began to become detached knowing where our food comes from; when the way cities get fed becomes mysterious and invisible. Today, the only cows to be seen in Manhattan are art.

However, this is one remaining cow tunnel in Cambridge, MA.

If not for the plaque, there’d be no way to know that the cow tunnel is there. It’s tucked away in a railyard, off-limits to pedestrians.

Squarespace site of the week: Answer Me This Store. This is a great podcast; you should subscribe. I even called in with a question on this episode.

From U.S. Routes and Interstates to state and... [Read More]