Mountain lions are classified as a “specially protected species”—not quite endangered, but close. There are somewhere between 2,000 and 6,000 of them spread across the foothills and mountains of California. One exceptional specimen in particular miraculously survived a trek across LA’s busiest highways. Researchers say it’s the first documented case of a cougar making it this far into the urban core without getting run over and killed. But now, he was effectively stuck – surrounded on all sides by an ocean of freeways and crowded neighborhoods.

Wildlife and urban development don’t usually go well together. Roads in particular fracture the habitats of wide-ranging animals. It restricts their movements and makes it harder for them to find food or a mate. But biologists and urban planners have started working together –- crafting a plan to try to help pumas move more safely around the city. And in the process this one cat, dubbed P-22, has turned into something of a celebrity—the symbol of a movement to redesign our cities and make the built environment more friendly to animals. 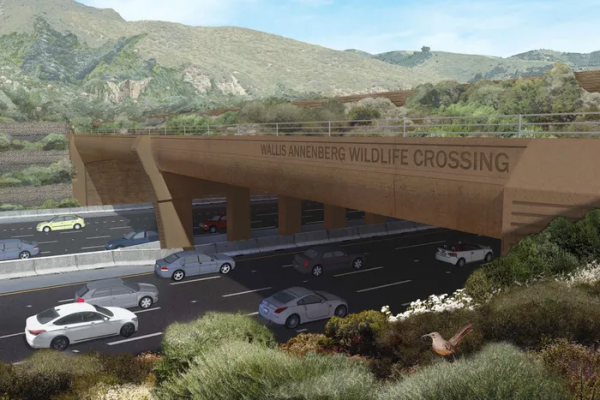 There has been a persistent effort to build a wildlife bridge, inspired in part by this one specific animal. Still, despite all the effort, we have no way of knowing whether P-22 will actually use this bridge. But we do know that many many other animals WILL use that crossing—foxes, bobcats, deer, and other mountain lions looking to find a mate or more space to call their own. P-22 became the inspiration and catalyst for doing something bigger — and begin to stitch the fragmented habitat of Los Angeles back together, and to get Angelenos to start thinking of their city as an ecosystem.

For all we know, P-22 is living a humble and relatively happy mountain lion life in his municipal park. But unknowingly, he’s got us on the same page about something big important. Not just the need to build a huge wildlife crossing in Los Angeles, but also the need for co-existence and connectivity … so that in a big city like LA you, me, P-22 and all the other urban-dwelling wild animals can all feel a little less alone.