And it was at this precise moment that our hero emerged from the shadows to save the day. He was wearing a black and white striped cape and a mask. The caped crusader bravely approached the front of the car, placed his hands on the hood and started pushing. 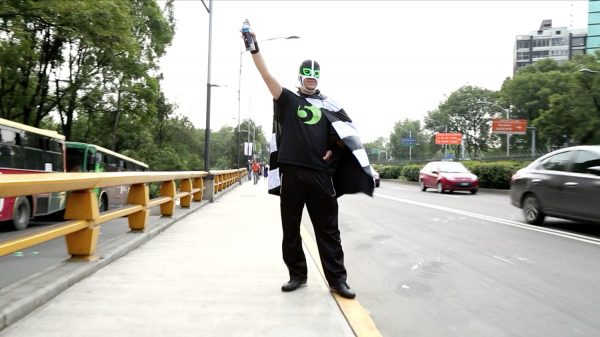 El Peatonito models his look on Mexican wrestlers. But this hero does not wage his battles in the ring. He fights in the dangerous, smog choked, traffic clogged metropolises. Wherever the humble pedestrian faces their most dangerous villain, the automobile.

Peatonito’s goal is to get people’s attention. He wants everyone to look at the folks who are putting pedestrians in danger. He wants them to feel shame and to change their naughty ways. The absurdity of facing down a superhero forces drivers to think differently about car culture. In a city where five or six pedestrians die every week from car related incidents.

But for all his theatrics, El Peatonito’s work on the streets can only accomplish so much. For bigger changes to happen, we need activism on a broader scale. That’s why El Peatonito works alongside other pedestrian activists at a grassroots organization called Sunset 4ALL. They put together a proposal to improve the city’s bike lane infrastructure and improve sidewalks, build more shade structures and bus stops and expand access to public parks.

On the Grid: Visualizing Street Network Orientations Across 50 Global...

At a glance, the overall pattern formed by... [Read More]