In Southwest Alaska, two big rivers flow across the subarctic tundra, emptying into the Bering Sea. Together, the rivers create the Yukon-Kuskokwim Delta, an area the size of the state of Illinois. Scattered along the rivers and coast are 56 Alaska Native tribes, in communities of mostly a few hundred people. 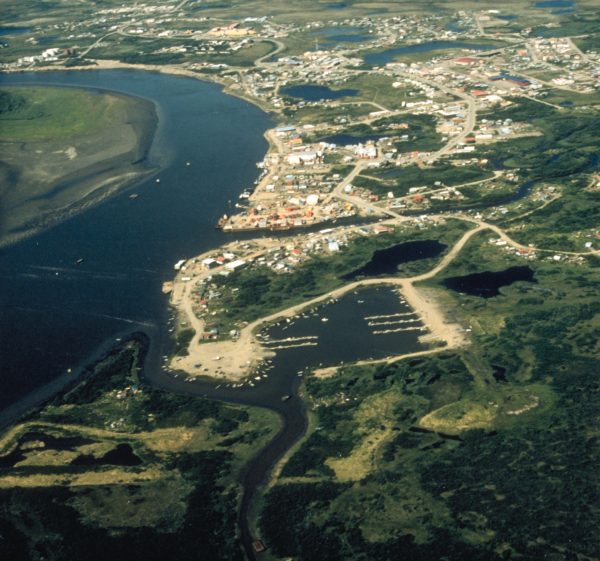 A tundra river delta is a unique environment. It’s a wetland, with ponds scattered in every direction, and streams and tributaries braiding and weaving between them. From an airplane, it’s hard to tell if there’s more water or land below. The hub of this region is the city of Bethel, population 6,500. The town is the economic and bureaucratic hub of the Y-K Delta. It’s the place people fly into for medical care, shopping, work, and to get to a larger airport. And the reason they fly is that the entire region is off the road system. The only way in or out of any of the communities in the region, including Bethel, is by plane or boat. In winter, when the rivers and lakes freeze over, you can also snowmobile or drive a truck along the frozen river.

This all presents some interesting challenges when it comes to waste because pretty much everything that gets imported to Bethel ultimately stays in Bethel. It comes in by cargo plane or barge, and even when something stops working, it’s often too expensive and too inconvenient to get it out again. In other places in the United States, trash is thrown “away.” But in a town scratched from the tundra, unconnected by roads… there is no “away.” There is only “here.”

Diane McEachern has been a resident of Bethel for about 20 years, and she’s made it her personal mission to count every single dead car in the city. Dead cars are the most visible manifestation of the town’s junk problem. You see them everywhere — broken down, abandoned, left to rust and rot out in the elements. They line the sides of the roads. They fill people’s yards and sit scattered throughout public parking lots. Diane has decided she wants to count them all and over the course of a year, she’s methodically checked every street, parking lot, and yard.

Over time, what began as a curiosity, turned into something more… Diane got to thinking about all the things that get brought into Bethel — not just every car, but every fork, every shoe, and every lightbulb. It’s all coming in, but it’s not going out. “The cars are going to keep coming…” says Diane, “they’re just gonna keep coming and where they gonna go and how can we organize ourselves to handle this differently is […] a burning question for me.”

The Bethel airport is where the town’s dead car problem is most apparent. It’s like a graveyard of rusting vehicles. There are rumors the cars were left by people who drove to the airport, got on a plane, and never looked back. It’s so bad you can almost never find a parking space. All these abandoned cars have become a major headache for the Alaska Department of Transportation, which oversees the Bethel Airport. Between keeping snow off the runway and filling potholes, removing the abandoned cars isn’t a priority.

About 100 vehicles were taken to the Bethel landfill last year. Meanwhile, about 300 vehicles were barged into town. It costs the state $50 to dump a vehicle because the owners are nowhere to be found.

It’s common to walk into a house and feel crowded from all the things that have accumulated over the years that someday might be useful. Outside the home, the landfill is used as a kind of shopping center. If you’re looking for a part for a refrigerator or stove, that’s where you go to find it. People also go there to find vehicle parts while others keep them in the yard. Rural Alaska is famous for its scrappy resourcefulness. You can’t live in a place that’s so remote, where things take so long to get and cost so much money without creativity. People tend to hold onto stuff for a long time. Even broken stuff.

Fun on a Bike, Hard on a Car

Part of the reason why there are so many dead cars in Alaska is that the roads are notoriously bad. Sometimes it seems like it’s more pothole than road. Warming winters have made them even worse. Instead of the temperature dropping and staying below freezing, it goes up and down. As the ice melts and then refreezes, it causes the roads to crack. The infrastructure of the Outside arrived through colonization, and it doesn’t work so well in Alaska. Over time, the ground has frozen and thawed so many times, that the pavement has created these giant heaves. It’s like a roller coaster ride. Fun on a bike, but hard on a car.

As it happens, this land of abandoned vehicles has a thriving taxi industry as well. Cabs in Bethel are a critical shared resource, heavily relied upon by the constant influx of travelers from the nearby villages. Once people arrive by plane or boat for their shopping, appointments, and business, they need a way to get around. And that need has made Bethel the cab capital of the U.S… per capita anyway.

“Per capita, Bethel has the most cabs in the United States, but there’s 59,” says Naim Shabani, co-owner of Bethel’s largest cab company. That means there’s one cab for every 110 people. Even people who live in the Y-K Delta and have their own vehicles regularly use cabs, like when the roads are icy, and vehicle owners don’t want to risk their cars sliding into a ditch. Why take a chance with your own vehicle when you can just take one of Naim’s taxis?

Bethel’s disposable economy, where cars get used and then dumped by the side of the road, is relatively new to the area. The Yukon-Kuskokwim Delta was one of the final places colonized in the U.S. territory. It didn’t have the natural resources like large gold deposits, whales, or sea otters to lure settlers. This late colonization is one of the reasons why the Yup’ik culture remains so strong. It’s why Yup’ik is one of the few Indigenous languages in the nation spoken as a first language, and it’s why Yup’ik people still hunt, fish, and gather on their ancestral lands.

Yup’ik Elder Esther Green has seen a lot change in her 81 years. She started life in a nearby village and moved to Bethel as a young girl. She’s watched Bethel grow from hundreds of people to thousands of people. And all the vehicles that have come with them. There is even a beach in Bethel where people once constructed a seawall entirely out of dead cars. They were dumped there to stop erosion. The dead car seawall didn’t work. The Alaska Department of Environmental Conservation deemed it an environmental danger in 1981 for leaking battery acid and gasoline into the river, and the cars were removed a few years later.

In the Yup’ik tradition, everything that isn’t created by humans has a yuk. Yuk translates to “a person.” Plants, animals, water, rocks, and so on, all have yuks. It’s a spirit, an animation, an awareness. “Everything around us has ears, and they can see and they can feel. Just like us human beings,” says Esther Green. That means when we throw vehicles across the landscape, leaving them to rot, it causes a disruption.

Diane McEachern thinks that the dead car problem in Alaska isn’t strictly an “Alaska problem.” It’s a problem that we all are dealing with, even if we can’t see that. “This isn’t particularly unique to Bethel. It’s just we have a unique context, so it’s all visible.” More vehicles will be barged into Bethel next summer. They’ll keep coming, keep dying, and keep accumulating.

As much as Bethel feels unique, it’s not. We all throw things away — in many cases, it ends up in a landfill, far removed from our consciousness. But the junk remains on the Earth. It’s all piling up somewhere. In Bethel, there are no illusions about where that place is. It’s all around them. They’re living in it.

Some Other Sign that People Do Not Totally Regret Life