It’s one thing to look at a finished illustration and imagine the time, energy and steps that went into making it, but for The 99% Invisible City, illustrator Patrick Vale also made a series of work-in-progress movies that provide a unique, step-by-step window into the creative process. These animations offer insight into the steps of building up drawings but also tell specific stories about evolution of different pieces (click on each of the short films below to see the linework in action):

Vale is a Brooklyn-based illustrator, but one of the things we sought to capture in the book was a sense of universality — different spaces both real and imagined that would capture things found across urban times and spaces. On a trip to London, Vale stayed alongside a cozy alleyway and realized its potential as a backdrop for an illustration, but that was just the baseline. He also went around the city to find key subjects related to this particular section, including cannon bollards and stretcher railings found around the metro area. His finished piece is a combination of a real setting and layers of additions, highlighting specific objects against an actual location in the urban environment.

In and around New York City, Vale sought out places based in part on what elements of adjacent essays could be fit into the frame. In the drawing above, he took a typical-looking street corner but incorporated story elements including sidewalk easement plaques, breakaway posts and emergency access boxes. Different levels of detail and types of linework further helped highlight essential features in this illustration — again, there is a balance of what was there and what needed to be added to fill in gaps and tell the story of the section in question.

In some cases, entire subjects were also local to the Big Apple, like a series of buildings situated around the Holland Tunnel. To help tell one particular story of novel infrastructure, the above vignette sits inline, tucked into the side of an essay about this groundbreaking project — pictures really can be worth four-figure sums of words. And while this structure featured is city-specific, it speaks to the challenges and breakthroughs of a generation of urban design innovators who were tasked with reconciling historical architecture and new technologies. 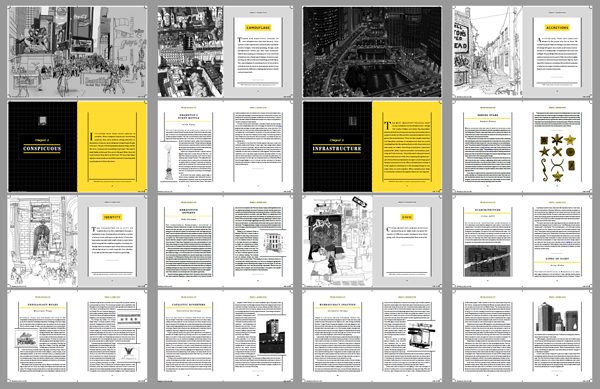 In the finished book, Vale’s illustrations span a huge range from small vignettes and single-page section starters to double-page chapter spreads. These variously serve to set the tone for larger parts of the book but also highlight details right where they are being discussed on the page, playing an integral part in telling over 100 design stories.

Like other aspects of this book, illustrations evolved, growing out of ongoing conversations about what was important to represent in both general and specific terms. Visually, they are engaging and dynamic, but coupled with words and design, they work in concert to tell a much larger story of the world’s built environments.

Previous Episode: Font of Future Past: The Fraught History and Persistent Popularity of Futura
Next Episode: Extinction Agenda: How Border Patrols Enforce a Uniquely Rat-Free Alberta