In the world before telephone, radio, and email, the tasks of transmitting information and moving material objects were essentially the same challenge.  The way you sent someone a message was pretty much the same process as sending someone a package—you had to send a piece of physical media through the post, or on a ship.

It was really the telegraph that divided telling someone something from far away and  giving someone something from far away. But everyday people didn’t speak Morse Code (or have telegraph equipment).  The message had to be deciphered, written on a slip of paper, and then that was delivered to the recipient. For many cities, the pneumatic tube was essential in getting these slips of paper to the intended recipient quickly.

It’s no surprise that electronic communication eventually killed most of the need for pneumatic tubes. But you may not know that it was the telegraph itself that also put pneumatic tubes into widespread use. 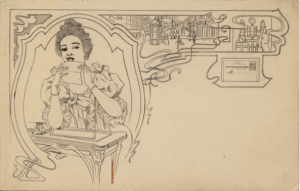 Architectural historian and pneumatic tube aficionada Molly Wright Steenson leads us through the rise and fall (but not disappearance of) pneumatic tubes in Paris, and beyond.

…and, here’s a similar trek through a modern-day pneumatic tube system (complete with sound FX!).

But the scale of the pneumatic tube systems in hospitals (or banks or big-box stores) pales in comparison to the one on Roosevelt Island in New York City.  They use underground tubes—not trucks—to dispatch with their garbage.  Here’s a video detailing the wonders of their system, produced for the museum exhibit Fast Trash.

And if you really can’t get enough of pneumatic tubes or Molly Wright Steenson (we sure can’t), here she is giving a rapid-fire talk at Ignite/LA.

NOTE: In the audio version of this story, we stated that the Poste Pneumatique in Paris operated until 1964; it actually operated until 1984. Molly writes, “Duran Duran was a household name before pneumatic tubes stopped shuttling messages in Paris.” We regret the error!

In winter months, urban activists and designers have... [Read More]

They look a bit like bumpers, generally painted... [Read More]