Looking at finished drawings in The 99% Invisible City, one could be forgiven for thinking that what appears on a page represents the size of a piece, which in some cases span multiple sheets of paper. 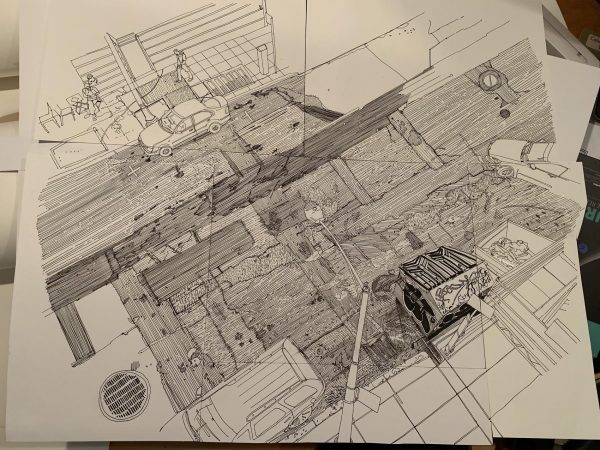 Consider this double-page spread in the book by artist Patrick Vale, which spiraled out from a single page to span multiple ones as the drawing grew. And that was just the first stage of the process.

As the book’s design evolved, we considered ideas like the one highlighted below (in which chapter-opening images would be framed in yellow to make them easy to spot and even edge-visible). 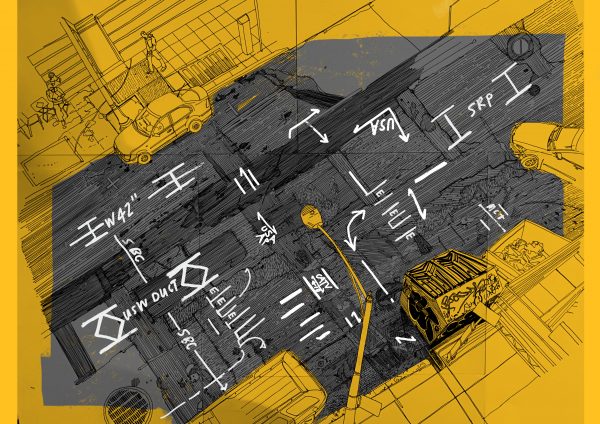 Over time, designer Raphael Geroni’s choice to use yellow and black on chapter title pages instead of on these double-page spreads freed up illustrations to use color in other, more nuanced ways. 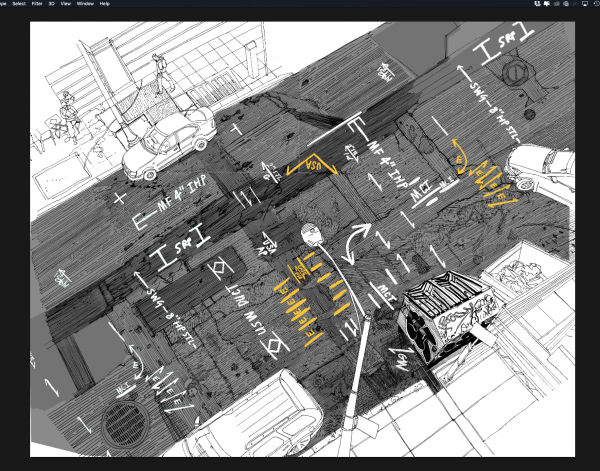 Absent a yellow frame, key parts of drawings like this one are rendered more clear, like the utility codes and other layers of history embedded in the streetscape above. This drawing inverts expectations, using light linework for the surrounding sidewalks, cars and people, while zooming in on the things we normally don’t notice in between, then using yellow to pick out specific features within that field of details.

The story we wanted this drawing to tell was one of iteration — streets are forever being dug up to shuffle utilities and then repaved. Moving between physical and digital realms, Patrick was also able to engage both directly by hand on a page but also to add layers of color and experiment with different approaches as the design evolved.

One final fun fact about this particular drawing: for many of his illustrations, Patrick walked around various cities to find a starting point, then sat down to draw (on) his surroundings. But in this case, he began with a photo of beautiful downtown Oakland, California, shot near the offices of 99% Invisible by book coauthor Kurt Kohlstedt.