As technologies evolved, early wood building blocks gave way to modular Lincoln Logs, interconnected Tinker Toys and plastic LEGO bricks that snap together, each representing a flexible world of creative potential. Each of these, though, was largely independent of the others, at least until the Free Universal Construction Kit, a nifty system which quite literally ties them all together. 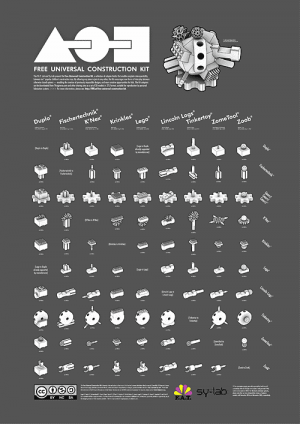 Per its designers, different building sets should be able to “talk to one another,” allowing for creative interplay. Their solution is a series of adapter pieces that allow K’Nex to link with LEGO, Zoob to live alongside Lincoln Logs and other classic and modern construction kits to connect with one another directly.

From a technical perspective, 3D printing lets interested parents (or adult players) download plans for these connectors and print them on open-source personal manufacturing devices.  The interplay between these systems is about more than just making complex constructions — different toys lend themselves to different forms. Some of these sets (like LEGO), for instance, are suited to more architectural constructions while others (like Zoob) naturally lead to more organic creations.

“The Free Universal Construction Kit is a collection of nearly 80 adapter bricks that enable complete interoperability between ten popular children’s construction toys,” explain its creators. “By allowing any piece to mate with any other, the Kit encourages totally new forms of intercourse between otherwise closed systems — enabling … the creation of heretofore impossible designs.” The system hints at a larger strategy of filling in gaps between worlds of constructive play, allowing all kinds of things to “play together” in new ways. 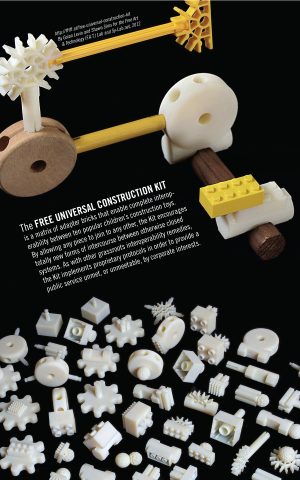 As author and architecture critic Alexandra Lange points out in her book The Design of Childhood, many construction toys have evolved over time from durable objects of free play to ones with prescribed processes and limited products (like a highly organized LEGO set with very specific plans). Viewed in this light, systems like the Universal Construction Kit offer a potential way back toward a more open-ended creative process, where children can find (or even make new) connections between endless arrays of modular pieces. For fans of toy history, too, there may be an opportunity in this system to educate kids about more intangible connections between past and present modes of play, linking old and new toys both physically and conceptually.