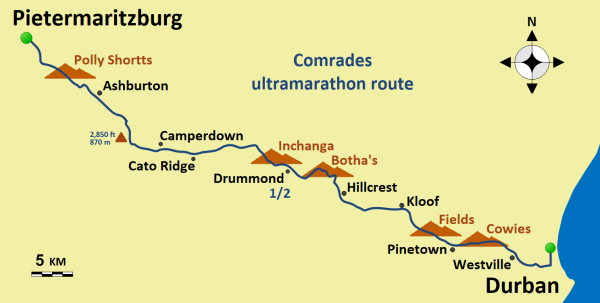 Over the course of the day, runners follow a route that weaves through what feels like all of South Africa. The race passes through wealthy suburbs full of cafes and craft breweries and sleepy, rundown little farming towns. It cuts across the sugar cane plantations that first brought British colonizers to this region in the 1800s. There are shack settlements and rich private schools.

Around the world, ultra-marathons are having a moment. These are races that are any distance longer than a standard 26.2 mile marathon. The number of people running them more than quadrupled between 2010 and 2020. There are now thousands of these races annually.

And you only have to eyeball the start line of an ultra-marathon in North America or Europe to see that this is still an overwhelmingly white sport. But in South Africa, it’s a different story — one brought to you this week by reporter Ryan Lenora Brown.

Previous Episode: A Sea of Yellow

Least Resistance: How Desire Paths Can Lead to Better Design

Informal ‘desire paths‘ can form with as few... [Read More]