A series of “superblocks” underpin a forward-thinking and pedestrian-oriented urban design strategy being deployed in Barcelona. These innovative block configurations are designed to reduce car-related traffic, noise and pollution. To create each new superblock, the city will convert a nine-block area into a unified mega-block neighborhood. This redesign approach represents a central part of the city’s visionary Urban Mobility Plan, which aims to decrease urban traffic by over 20% and free up close to 60% of road areas for reuse as “citizen spaces.”

Reports suggest thousands of people in the Barcelona die prematurely due to poor air quality each year. At the same time, over half of the population lives with everyday noise levels deemed harmful. Sedentary lifestyles are also cited as a critical urban health hazard in the city. 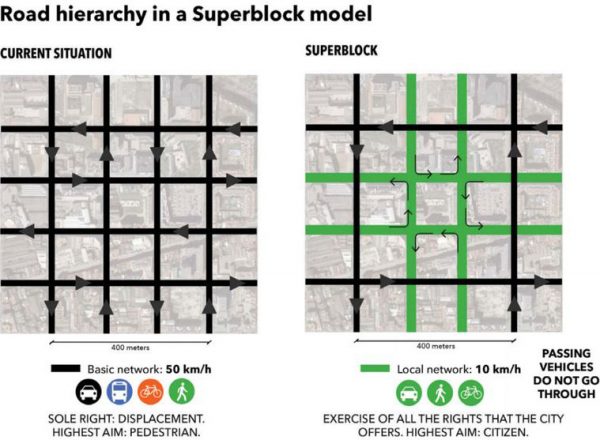 The plan to address these and other issues in the city is audacious yet conceptually simple. Essentially, nine-block clusters are blocked off to through traffic. Vehicles allowed down the internal streets are limited to 10 KPH, effectively the speed of a cyclist or jogger. Cars and trucks moving around the city are encouraged to bypass the interior of these new superblocks entirely. Parking within the these big blocks, meanwhile, is to be slowly moved off streets and underground. 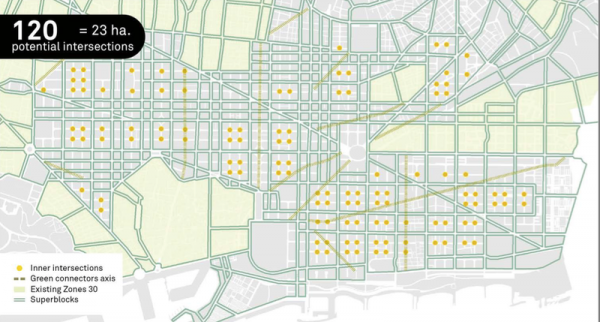 The famous Eixample neighborhood is one of the starting points for this civic redesign. Its blocks were built large and designed to contain green spaces in the center, but the layout had unintended consequences: urban development led to surrounding streets being packed with traffic, fueling air and noise pollution.

As old regular blocks become part of new superblocks, existing sidewalks and bike lanes are being expanded to take over the existing street space. Across the city, planners aim to add hundreds of miles of cycling paths and make sure pedestrians are never more than a few hundred meters from a bus stop. In total, they intend to free up more than 10,000,000 square meters of space currently used by cars.

The city government has six main goals in building superblocks:

Success in this city could also inspire other cities to follow suit. “Now imagine the city where you live, or your neighborhood,” asks David Roberts of Vox. “Imagine confining motorized vehicle traffic to a perimeter around several interior blocks, where space would be opened up to festivals, farmers markets, bikes, families strolling, kids playing in the streets, and you, there, in your favorite chair at the sidewalk cafe, watching it all go down as you sip an espresso.”

Critically, the plan is being deployed in stages as well to gauge results and adjust as it progresses. Initial phases will simply involve changing out traffic signals and signage to reflect new rules, costing relatively little while beginning to reshape the way streets are used.

The 1980s were a transitional time for American... [Read More]