Since 2004, the logistics division of the United Parcel Service (UPS) has instructed delivery drivers to avoid taking left turns. The company’s engineers researched the issue extensively and determined that left turns add travel time, fuel cost and accident risk to the equation. Coupled with other optimizations, this change reportedly helped the company save “around 10 million gallons of gas and reduce emissions by the equivalent of taking 5,300 cars of the road for a year.”

Time and fuel aside, left-hand turns can be dangerous in terms of oncoming traffic and pedestrians. Federal data shows that over 50% of crossing-path crashes involve left turns while only around 5% involve right turns. A study in NYC concluded that left turns are three times as likely to cause a deadly crash involving a pedestrian than right turns. 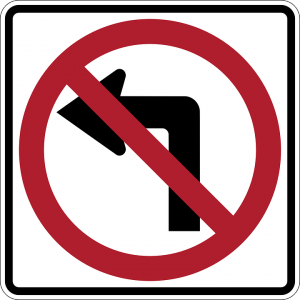 Given their various risks and disadvantages, why not rework intersections to get rid of left turns entirely? It sounds like an improbable solution, but that is precisely the thinking behind the Michigan Left (also known as a “boulevard turnaround” or “Michigan loon” or “ThrU Turn intersection”). In the same left-free family as the “bowtie” and the “jughandle”, this alternative intersection design eliminates lefts at intersections in favor of a U-turn and right turn.

Instead of adding a turn signal phase or forcing drivers to cross oncoming traffic, the Michigan Left sends them right through the intersection. Drivers then turn across the median at a designated spot (generally within a few hundred feet) and wrap back to make a right turn onto their desired road (going the same direction they would as if they had taken a left at the intersection).

Studies suggest these intersections significantly reduce left-turn collisions, as one might expect. They also reduce the total time needed for traffic light phases and improve pedestrian safety — walkers and cyclists no longer have to worry about drivers failing to notice them while rushing to squeeze in a turn. Of course, Michigan Lefts also increase travel time and distance for left-turning drivers, but this seems a small sacrifice for improved safety.

The bowtie is basically the same thing as a Michigan Left except that it swaps U-turns for roundabouts on either side of the primary intersection (see also: the “hamburger roundabout“).

Drivers crossing an arterial street from a minor cross street are sent straight through then instructed to circle back via a roundabout on either side of the major-road intersection. To understand why it is called a “bow tie” just rotate the above diagram 90 degrees.

A jughandle intersection (also known as a “Jersey left”*) likewise addresses the left-at-intersection question by avoiding it entirely – one of the multiple configurations of this turn type is shown to the left.

On the plus side, jughandles take left-turning vehicles out of traffic lanes and can break pedestrian crossings into smaller increments (by eliminating left turn lanes). On the downside, this design strategy can confuse drivers and effectively add an additional crossing for pedestrians (where the jughandle rejoins the road). Peer the diagram, it also does not completely eliminate left turns (just moves them out of intersections).

None of these approaches is without its problems — all of them require more space than a conventional intersection and some come with unique dangers. Unfamiliar drivers or pedestrians, for instance, may not know how to handle them at first. Still, where time and space permit, there is something to be said for doing away with left turns.

[*Editor’s note: be careful — the term “Jersey left” also has an alternate meaning in popular parlance: it can refer to quickly (generally illegally) turning left and cutting ahead of oncoming traffic at the start of a green light cycle. AKA: Boston left, Massachusetts left, Rhode Island left or Pittsburgh Left.]