At a glance, “design” of these Brutalist artifacts of the automotive age may appear relatively simple. But a great deal of thought and experimentation is baked into the prefabricated concrete of a “Jersey barrier” (known in parts the western United States as a “K-rail”). And they work, too, helping address the roughly 20% of vehicular collisions that result from one vehicle crossing a median into oncoming traffic. 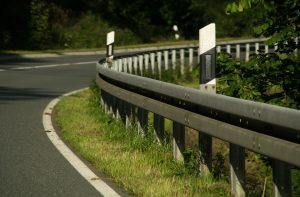 While the ubiquitous barrier we know today was developed in New Jersey, its story traces back to the West Coast. Up until the 1940s, a treacherous “Dead Man’s Curve” area of a coastal California highway was divided using conventional wooden beam guardrails. But these frequently broke, in part because truckers would run up along them as a method of supplemental braking on steep slopes. Parabolic concrete barriers were installed and deemed a success, but the spread of this solution would stem from further experiments along the East Coast.

Through the 1940s and 50s, New Jersey continued to iterate on the shape of these angled concrete barriers. For years, the state highway department would design and deploy a set of barriers, then study the data to determine what heights and widths and angles actually worked best for improving safety during real crashes. Each improvement iterated on the previous model, but they all worked similarly.

Essentially, the lower slope of these barriers allows the wheels of a vehicle to run up the base, limiting structural damage to the sides of vehicles. The shape also helps keep vehicles traveling in a forward direction, guiding them along with traffic and thus reducing the danger of further collisions. A reflective exterior coating aids visibility, too, helping reduce crashes.

“The average motorist has no idea how sophisticated these barriers are,” says author Kelly A. Giblin. “Their primary function is obviously to separate opposing flows of traffic. But their wedge design was developed to minimize the severity of accidents by restoring control of a vehicle on impact. In a shallow-angle collision—a sideswiping—the Jersey barrier lets the front tire ride up its lower angled face and gets the vehicle back on the roadway with minimal damage.”

By contrast, cheaper and simpler vertical barriers “don’t lift vehicles, so they’re less likely to cause rollover. But damage to the vehicle is often greater, as is the likelihood of occupant injury, and redirection of the vehicle into the roadway is less predictable.” Other models have been developed as well, but most build on the basic idea of Jersey barriers. 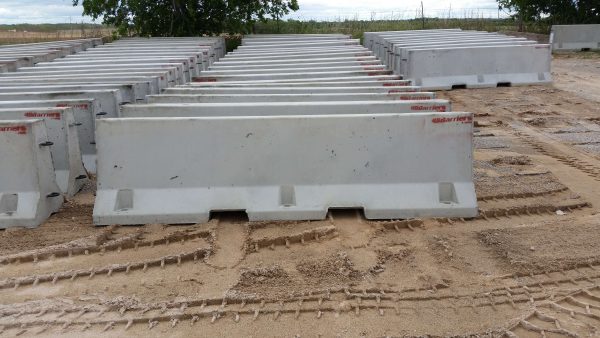 Initially, the versions commissioned by the New Jersey State Highway Department were mostly permanent, cast-in-place solutions. As the design solution began to spread nationwide, later barrier iterations became modular. These can be slotted into place temporarily to guide cars and pedestrians during road construction, for instance. The moveable versions often feature two gaps on their underside so forklifts can slide in easily to lift and move or stack them as needed.

Some barriers also feature steel hoops protruding from the top, making them easier to lift with other heavy machinery. These days, there are plastic versions, too, though these provide less protection.

Previous Episode: Now Read This: 42 Book Recommendations from the Staff of 99% Invisible
Next Episode: Dialing Around: How Rotary Phones Shaped the Distribution of US Area Codes