A few years ago, reporter Sean Cole was working on a radio story and needed to interview the rapper Busta Rhymes.

Sean was living in Boston at the time, so he did a Google search for “Busta Rhymes” and “Boston” to see if Busta had any upcoming shows that Sean could stake out.

Google didn’t return any relevant tour dates. But it did give Sean a map, centering on a tiny speck of land in a neighboring suburb called Shrewsbury, Massachusetts.

The tiny speck of land was labeled Busta Rhymes Island. 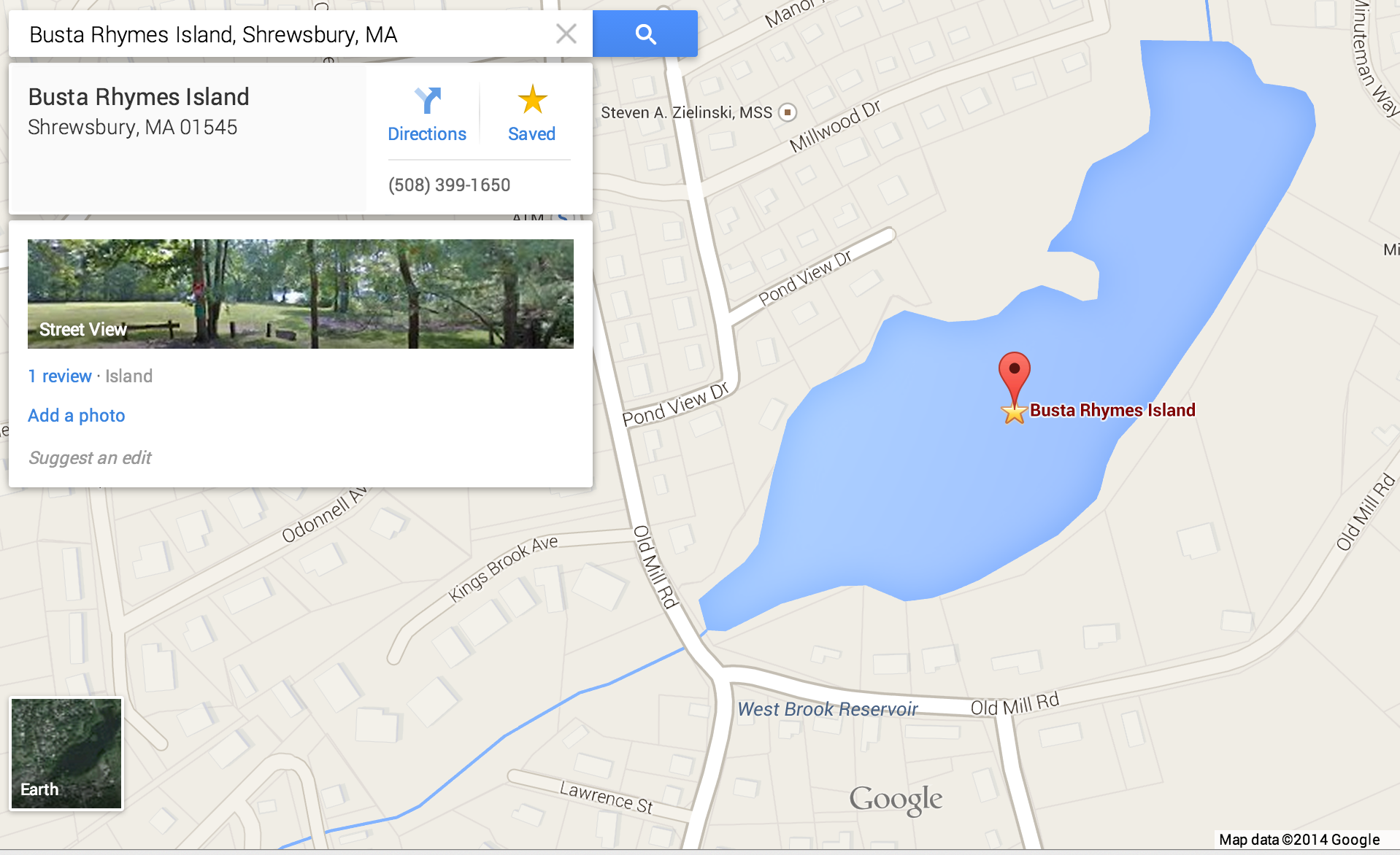 The Boston Globe confirmed that, yes, Busta Rhymes Island Is For Real.

The Google Maps listing gives a phone number to call the island. So Sean called. A guy named Kevin O’Brien answered. Kevin is a guy in his early 30s who works in tech support and DJ’s weddings on weekends.

Kevin started canoeing out to the island when he and his wife moved to Shrewsbury about ten years ago . The island, a forty-by-forty speck of land,  is practically in their front yard. Kevin planted blueberry bushes on the island, and there’s a rope swing hanging from one of the trees. He doesn’t just visit the island a bunch, he takes care of the island– he cleans up after the teenagers who leave beer cans lying around. He drinks beer himself on the island, with his wife and their friends.

And when you love a place the way Kevin loves this place, you don’t want to refer to it generically. You want to give it a a name.

Kevin and a friend decided on Busta Rhymes Island.

All Kevin had to do was go on Google Maps and apply a geotag to it. But Kevin wanted the name to stick, so he didn’t stop there.  He wanted Busta Rhymes Island to become the island’s official name.

Kevin submitted a formal proposal to the U.S. Board on Geographic Names, which decides what the federal government is going to call a piece of land. The Board turned Kevin down– but not for the reasons you might think.

For any body of land to be named after a celebrity in a commemorative fashion, that person has to have been deceased for five years. The thinking is that when someone passes away–especially someone high-profile– it’s an emotional time. Close relatives, friends, and fans want to honor the person. And so the U.S. Board on Geographic Names instituted a five-year cooling-off period, figuring that if someone is still beloved five years after his or her death to the extent that people still want a place named for him or her then, then and only then, should naming be considered.

Also, a living celebrity can do something heinous. Like that time Busta Rhymes allegedly used a gay slur in a Miami cheeseburger restaurant.

Then how do you explain Mark Sandman Square in Cambridge, Massachusetts?

Mark Sandman was the lead singer of the Boston-based band Morphine. He died in 1999 after collapsing on stage during a concert in Italy. And then just a year later, a sign honoring him went up on the corner of Brookline Street and Massachusetts Avenue.

It turns out that the five-year rule applies only to geographic features. Public spaces in cities are a different matter entirely. Those are decided by local municipalities, not the Board on Geographic Names.

In fact, some intersections in Cambridge have a different commemorative black sign on each corner.

(Morphine live at The Middle East bar in Cambridge, MA.)

As for Busta Rhymes island, it might be a while before it can be officially recognized. But you can help. If you find yourself in Shrewsbury, Massachusetts, and you ask for directions to Busta Rhymes Island, that counts as “local usage” — one factor that the U.S. Board of Geographic Names looks for when considering a naming proposal.

Tiny Letter of the week: 5 Intriguing Things by Alexis Madrigal