This is an ode to an information designer who made life a little bit easier for millions and millions of people: Ladislav Sutnar, the man who put parentheses around area codes.

Sutnar was one of the first people to be called an information designer. His work from the mid-20th Century still looks quite modern—and he still looks like a badass.

Thanks to listener Matt McInterney who tipped us off to Sutnar last August. 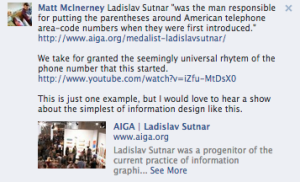 Matt also has his own design podcast, called On The Grid, which he hosts with Andy Mangold (the designer of our Kickstarter notebooks). Thanks Matt!

99% Invisible and Planet Money team up and we talk to commodities traders to answer one of the most important questions in finance: What actually happens at the end of the 1983 movie Trading Places?

We know something crazy happens on the trading floor. We know that Eddie Murphy and Dan Aykroyd get rich and the Duke brothers lose everything. But how does it all happen? And could it happen in the real world?

Also on the show: The “Eddie Murphy Rule” that wound up in the the big financial overhaul law Congress passed in 2010.