Slovenia is a small country in Central Europe nestled between Italy, Austria, Croatia and Hungary. It’s a land of snowy white peaks, green valleys, and turquoise rivers. The country is beautiful in all seasons, but it is perhaps at its most magical around Christmastime. 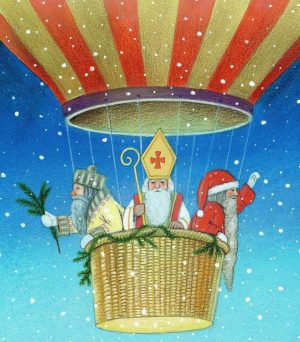 Like children in other parts of the world, Slovenian kids are visited by Santa Claus every Christmas Eve (he’s called Božiček), but he isn’t the only magical holiday man in the land. Kids in Slovenia don’t have to settle for just one santa. They also have a more traditional option available. A catholic saint called Miklavž  who dishes out the gifts on the night of December 5th. If that weren’t enough, there’s also a uniquely Slovenian Santa who comes down from the country’s highest mountain every New Year’s Day to shower the children of Slovenia with good wishes and even more presents. He is called Dedek Mraz. 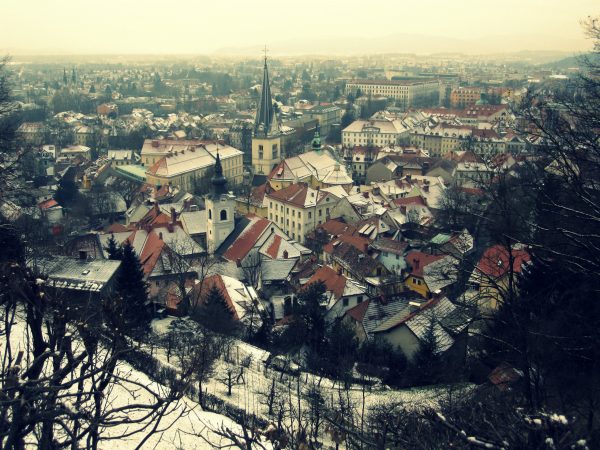 This nation of just over 2 million people is visited by, not one, not two, but three different “santas” every festive season. But it hasn’t always been this way. Each santa has had his moment in the spotlight—each in a different period of Slovenia’s complicated history. And in order to have a Christmas season that reflects that history and speaks to all Slovenians, you need three magical men.

The people of Slovenia have long been protective of their customs and language, and it’s easy to understand why: for hundreds of years they were ruled by the Hapsburg Empire, one of the most powerful dynasties in Europe. Within this empire, the Slovenes were a distinct group of people with their own language. But they did share the same religion with almost all other subjects of the Hapsburgs: Roman Catholicism. Roman Catholics loved their saints, and around Christmas-time, there was only one saint that mattered.

Saint Nicholas, (or Sveti Miklavž  in Slovene), was a bishop born in the third century CE. There are a lot of stories that surround Saint Nicholas, including one about a poor old man who got so desperate he was about to sell his daughters into prostitution. St. Nicholas intervened by delivering bags of gold coins to the man’s house in the middle of the night. His saint day on December 6th was when Slovenian children traditionally received presents while they were sleeping, just like those bags of gold one and a half millennia ago. 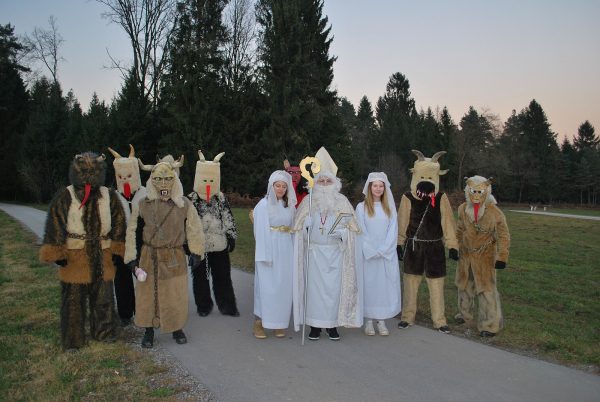 But the action really happened the night before during Miklavževanje (Saint Nicholas Eve). In the capital city of Ljubljana, there was a church sponsored parade with Miklavž at the center, dressed like a Catholic bishop with that iconic pointed hat, golden slippers, and a curling bishops’ staff. Saint Nicholas in the Slovenian tradition is kindly, but he’s accompanied by a group of little demons called parkeljni. Their role is essentially as a tool to be used by parents to frighten children into being obedient, and they carry around chains to help do their job. 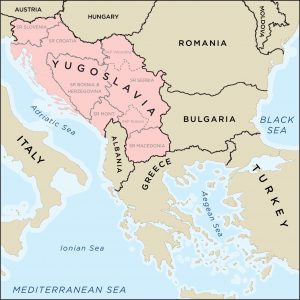 But Miklavž came under threat when the Austro-Hungarian empire crumbled after World War I and the Slovene people decided to join a collection of six nations called Yugoslavia. After World War II Yugoslavia became a communist country led by a charismatic strongman named Josip Broz, better known as Tito. Under Tito, Catholicism was suppressed. And Saint Nicholas aka Miklavž was banned.

The new Yugoslav communist authorities wanted to do away with religious customs and replace them with Socialist holidays. Banning dressing up as a Catholic saint was one thing, but taking away presents for children during the darkest month of the year would have been unforgivable. Tito knew that. And so he needed something, or rather someone, to take Miklavž’s place.

Dedek Mraz looked like an enormous bearded man from the Russian countryside. He would appear in factories where visiting children could come and and meet him. But a political crisis threatened to end Dedek Mraz before he had even had a chance to spread the holiday cheer. Josef Stalin wanted Yugoslavia to become a puppet state for the Soviet Union, but Tito wanted his nation to be fully independent.

Tito eventually outlawed all Soviet influence in Yugoslavia, but he wanted to keep Dedek Mraz — just not dressed like a Russian. Various new outfits were tried. Dedek Mraz appeared as a soldier, a miner or a sailor — basically Socialist archetypes of Yugoslav proletarian heroes — but neither the original recipe Russian Dedek Mraz, or the Yugoslavian cosplay version really caught on in Slovenia.

The people just didn’t buy it. It felt phony. And so Tito decided to allow each of the six Yugoslav nations, including Slovenia, to design their own, bespoke version of Grandpa Frost. And Slovenia, this country that had long been a part of a bigger empire, took the opportunity to redesign Dedek Mraz, and turn him into something distinctly Slovenian.

A sixty-nine year old painter called Maksim Gaspari was brought in to handle the design. Gaspari was a classically trained artist, but he was first and foremost a commercial illustrator with a broad fanbase. A Slovenian Norman Rockwell if you will. And when it came to Christmas, Gaspari knew what would appeal to as many Slovenes as possible.

In 1952 Gaspari created 3 postcards of his new, updated, Slovenian version of Dedek Mraz. He was smoking an old fashioned decorated pipe that was associated with this one small town in the mountains. He had a long sheepskin coat with these ancient Slovenian flower motifs on the coattails. He was a trapper with a hat made out of dormouse fur. He was not wealthy, but what wealth he had he shared by bringing gifts to children.

Slovenian fairy tales are full of modest and humble heroes, who rise to the challenge when needed — mountain men ready to answer the call. So Gaspari made sure that his Dedek Mraz spoke directly to the character of the people. A voluntary organisation called the Association of Friends of Youth was in charge of the Dedek Mraz rollout. They made ten identical costumes from Gaspari’s designs, and in 1952 the new Dedek Mraz made appearances in and around the capital.

This was followed by a booklet called ‘Dedek Mraz prihaja’ – ‘Dedek Mraz is Coming’ in 1957. The booklet had one main instruction. Dedek Mraz was a fairytale figure designed only for kids. He wasn’t a piece of state propaganda the way Stalin or Tito had treated him. He was fun! Translated into English the booklet said: “Dedek Mraz is not a didactic figure, but a lively, cheerful, witty, fairy-tale figure that sinks into the child’s world so that the child comes to life with it. ”

In 1987, an actor named Robert Waltl started playing Dedek Mraz at the main parade in Ljubljana in 1987. At this point, Tito had been dead for seven years and Yugoslavia was on a downward spiral toward complete disintegration. But Slovenia was actually doing well economically, and felt that the other republics were dragging her down. 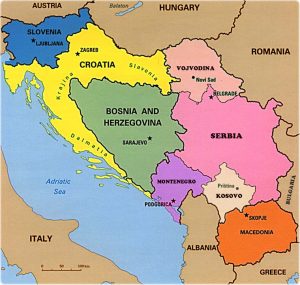 So in 1991, Slovenians took their chances and declared independence from Yugoslavia. Even though a short, ten-day war followed, Slovenia managed to escape the tragedies that rocked other former Yugoslav countries like Bosnia. After centuries of being part of monarchies, empires and failed six-part nation states, Slovenia had achieved independence. Still, this victory led to a battle over Slovenian culture, one that almost spelled the end for Dedek Mraz. Many Slovenes saw this moment as an opportunity to move into the modern world and reject everything from the past. And despite his fun Slovenian rebrand, some people still associated Dedek Mraz with the Soviet Union. A new Santa was needed.

Božicek and the Santa Trifecta

Suddenly, Slovenia was a democratic and capitalist friendly country looking outward to the US and Western Europe for inspiration. Many Slovenians embraced the capitalist world’s festive figure, Santa Claus. But this time, the new santa didn’t push the old one off the stage. In the end, Dedek Mraz survived the transition from socialist Yugoslavia to democratic Slovenia, perhaps because he was so well-designed for Slovenian culture.

Dedek Mraz and Santa Claus were side by side, sharing the Christmas spotlight. And that would have been enough for most counties. But there was a sleeping giant in this story — Slovenia’s first “santa” who had never really gone away: Sveti Miklavž, the original catholic St. Nick. While the government had banned public religious celebrations in the Yugoslav era, Catholic families still held festivities in private. And with independence, Saint Nicholas went public again. 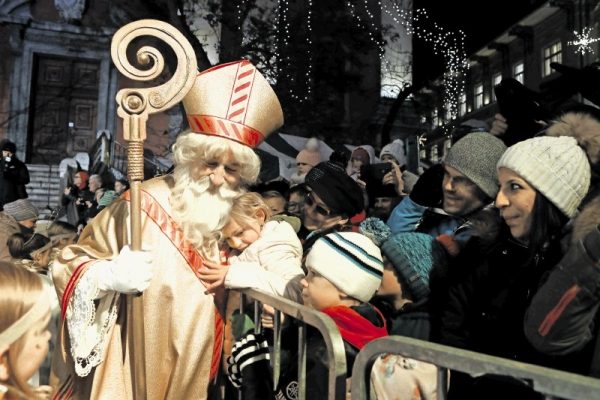 Robert Waltl, Ljubljana’s go-to Dedek Mraz, actually played a key role in Miklavž’ return. He believed that if Slovenia was to move on it had to reconcile its past as a faithful Catholic nation. So in 1991, Robert,  organized a parade for Miklavž. It was the first one since WWII —the saint’s grand return to public life. Never shying away from a challenge, Robert decided to play the central role of Miklavž himself. He even asked a bishop if he could borrow some church clothing to make his costume more authentic. 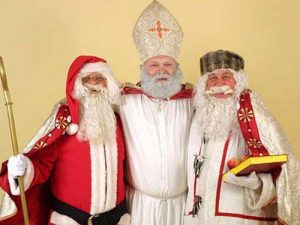 And ever since that moment, when Milkavž returned to the streets of Ljubljana, Slovenia has had all three santas at Christmastime. Slovenes have not only completely accepted all the ‘Three Good Men’ (tri dobri možje) they’ve been packaged together in a month of non-stop festivities called ‘Merry (or: veseli) December.’ Each Santa gets a specific time slot to perform their own brand of Christmas magic.

First on the calendar is Miklavž. He appears at churches across the country and parades in the big cities on the evening of December 5th. Then comes Santa Claus or Božicek. Christmas Eve is obviously his allotted night, but he tends to hang around the shops and malls. And,  finally, there’s Dedek Mraz, who actually makes appearances at kindergartens and schools throughout December. After Christmas, he’s the only Santa left on the scene. His parade happens at the New Year.

Slovenia has survived empires and a socialist autocracy to emerge as a proud independent state, but instead of repressing the past, it has embraced the santas that have helped define it, coordinating a festive season that has a time and a place for all three.