In 1902, President Theodore Roosevelt decided to vacation in a Mississippi town called Smedes, where he could hunt black bear. He was a big outdoorsman and went hunting a lot, but this particular hunting trip became kind of a famous story.

He had spent a few days hunting and hadn’t yet shot a bear. One morning, the president’s guide finally finds a bear and knocks it unconscious so the president can have the honor of shooting it. This female bear weighs about 235 pounds. She’s about half as heavy as she should be. The guide presented the bear to Roosevelt and she’s tied to a tree, semiconscious and injured. She looked very pathetic. Roosevelt took pity on her and decided it was unsportsmanlike to shoot her.

Roosevelt lowered his gun in this merciful moment. Word of this story spread, and a political cartoonist made a cartoon of the moment and drew the bear as almost like a little labrador puppy. It’s got these big, round, perked-up ears, almost like Mickey Mouse, with big wide eyes staring at the president, waiting to see what its fate will be.

The cartoon was called “Drawing the Line in Mississippi,” and it basically spawned the teddy bear. This adorable little bear in the cartoon was turned into a three-dimensional plush toy.

They named it after Theodore Roosevelt, calling it “Teddy’s Bear,” and it was a huge sensation. It was even more popular than baby dolls. People assumed that the wild success of the teddy bear would be unsustainable and that the toy was a novelty that would fade as soon as Roosevelt left office.

The toy industry was thrilled, of course, wanted to keep this successful run going. They were constantly looking for whatever was going to be the next cuddly plaything that American kids were going to want.

Fast forward to 1909, and Roosevelt’s term was about up. The president-elect was Roosevelt’s handpicked successor, William Howard Taft. In January of 1909, Taft goes to Atlanta, where he was the guest of honor at this banquet. The chamber of commerce in Atlanta decided they were going to serve him the truest, most unpretentious southern dish around: ‘possum and ‘taters.

It was an opossum roasted on a bed of sweet potatoes, presented whole on a platter, with its head on and tail on. The one that they brought to Taft’s table weighed 18 pounds. All of a sudden, the orchestra strikes up and the guests burst into song. Suddenly Taft is presented with this surprise gift: a small, stuffed opossum toy.

This is a brand new invention that some local Taft supporters try to position as the Taft presidency’s answer to the teddy bear. They’re calling it the “Billy Possum.” Already there was a company set up called the Georgia Billy Possum Company. According to one account, within 24 hours of that banquet, there were already deals being brokered for Billy Possums with distributors across the country. In covering the banquet, the LA Times announced that “The teddy bear has been relegated to seat in the rear, and for four years, possibly eight, the children of the United States will play with Billy Possums.” 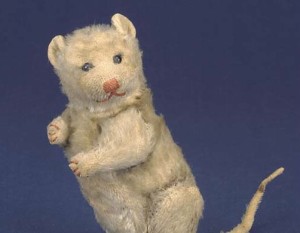 Since you’ve probably never heard of a Billy Possum, you can guess what happened next.

It was a total flop. The Billy Possum was forgotten and almost entirely out of stores within a couple of months. The Billy Possum never even made it to Christmas time, which is a special kind of tragedy for a toy.

There are several possible explanations as to why the Billy Possum never took off. The most obvious reason is this: opossums are ugly and nobody likes them. 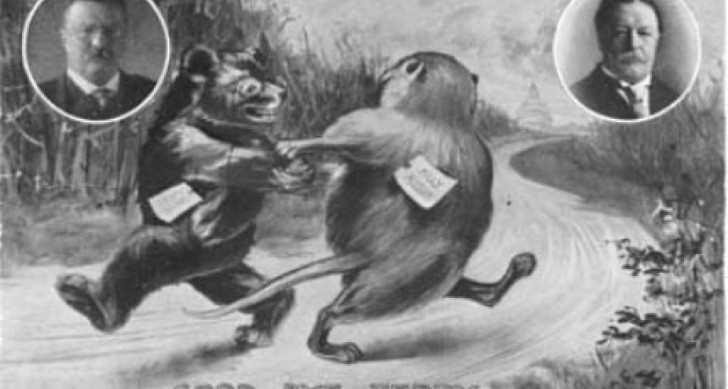 Additionally, Jon Mooallem argues that the acceptance of Teddy’s Bear and the rejection of Billy Possum comes down to their origin stories.

In the story that was told about Roosevelt and this bear, it was a very kind of tender moment, where Roosevelt was showing the bear mercy and when you looked at that cartoon, the way the bear was drawn, it looked like something you just want to sweep up into your arms and take care of and that was vulnerable and that needed your help. The story with Taft, it didn’t give it anything else. You know, Taft ate his opossum for supper. And he ate a lot of it, and he ate so much that after his first several helpings, a doctor seated nearby apparently passed him a note suggesting it might be a good idea if he slowed down a little.

The messed up thing about the famous story of Teddy’s bear is that it isn’t even the whole truth.

Roosevelt was a hunter. He was there to hunt bears. He wasn’t a PETA activist or anything. Although he did show the bear mercy, it was a very particular kind of mercy. After Roosevelt refused to shoot it, he said, “put it out of its misery,” and one of his hunting buddies slit the bear’s neck open with a knife. They carried the bear’s body back to camp and they ate off it for the next several days. On the last night of their trip, they finished the bear, roasted its paws, and ate them with — this is true — a side of ‘possum and ‘taters.

Jon Mooallem revisits the Billy Possum in his book, Wild Ones: A Sometimes Dismaying, Weirdly Reassuring Story About Looking at People Looking at Animals in America. In Mooallempalooza part 2, Mooallem performs selections from Wild Ones with live with musical accompaniment from the band Black Prairie.

Wild Ones is not a book about nature. It’s a book about how we value nature and try to fit it into our modern lives. Wild Ones is about the cutesy stuffed animals, the eco-tours, and the byzantine methods of conservation that evolve when our experience with wildlife goes from something natural to something designed. Human-animal interaction has become a designed experience and the story of that transition, as the title of the book suggests, is sometimes dismaying and weirdly reassuring.

Jon Mooallem is friends with the band Black Prairie, and as he was writing the book, they concocted this idea of the band creating a “soundtrack to the book” and the result was an Extended EP called Wild Ones: A Musical Score for the Things You Might See in Your Head When You Reflect on Certain Characters and Incidents That You Read in the Book. The CD case is furry.

“Wild Ones: A sometimes dismaying, weirdly reassuring story about looking at people looking at animals in America” by Jon Mooallem is available in all the usual places. You should get it. When you reach that moment where the book is over but you still want more, go check out Jon’s scrapbook of photos and ephemera he collected while conducting research.