Most active firefighting technologies throughout history have tended to require teams of firefighters and involve close proximity to danger. Buckets, pumps, hoses and extinguishers, while effective, only work when those employing them are willing to directly engage daunting walls of flame. For hundreds of years, however, another technology has evolved in parallel, designed in part to allow firefighters to keep their distance from infernos: the fire grenade.

The first known patent for a fire extinguishing device was awarded in 1723 to Ambrose Godfrey, an English chemist. Unlike modern point and shoot extinguishers, his gadget was intended to be thrown or rolled into fires. It was made for use in buildings as well as on ships, consisting of a cask of fire-extinguishing liquid and a pewter chamber loaded with (yes, of all things) gunpowder. A lit fuse ignited the powder and the resulting explosion would scatter the solution across a blaze. All in all, it was a quite literal manifestation of “fighting fire with fire.”

England at the time (and densely-packed London in particular) was prone to periodic infernos, and the country had evolved various techniques and technologies to combat these, including handheld pumps, fire hoses and fire engines. Most of these systems, though, relied on ready sources of water and teams of human operators willing to get and stay close to the flames. Godfrey wanted to supplement this arsenal with a weapon that could be kept closer at hand and would be easier for a single individual to deploy.

To demonstrate the efficacy of his device, Godfrey erected a three-story wooden house, adding pitch, oil, branches and twigs to “increase the fury of the flames, which were suffered to rise to their utmost height.” According to reports, the test building was set aflame and his device hurled into the first floor, extinguishing the blaze almost immediately. The inventor described the workings of his new gizmo as follows:

“The new method … consists of gunpowder closely confined, which as soon as animated by fire acts by its elastic force upon a proper medium (water impregnated with a certain preparation) and divideth it instantly into millions of millions of the most minute and imperceptible atoms, which with equal violence and swiftness are immediately forced into the innermost recesses of the flames.”

Godfrey’s device was sold and used for a time, though it did not, as he had perhaps hoped, obviate the need for more labor- and water-intensive approaches. When the modern spray extinguisher was patented in 1818, extinguishing grenades largely disappeared for several decades.

Then, in the late 1800s and early 1900s, a more compact and sophisticated type of the fire grenade began to take off. For a few decades, glass fire suppression spheres could be found all over in homes, schools, factories, even in cars and on trains. These globes contained firefighting chemicals like carbon tetrachloride and were designed to compact conventional or electrical fires.

Some were made to break on impact, while others featured spring-loaded triggers that would melt and break the glass when heated. 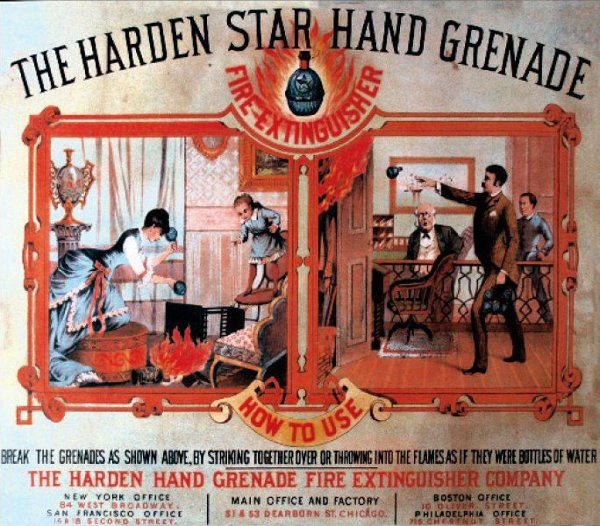 Unfortunately, the carbon tetrachloride liquid used in many of these contraptions is not only toxic to humans on its own, but also converts into a dangerous gas when exposed to extreme heat: phosgene, a deadly chemical weapon used in the first world war. In turn, when exposed to water (that stuff also commonly used to combat fires), phosgene breaks down into hydrochloric acid (corrosive to the touch) and carbon dioxide (that stuff humans prefer to breath out, not in).

With the rise of modern fire extinguishers and sprinkler systems (and in light of aforementioned chemical dangers), fire grenades once again became a lesser-used technology for most of the 20th Century.

Today, a number of (less-problematic) grenade-style extinguishers are still used, generally designed to open up or self-destruct when they encounter fire and disperse dry chemical powder over the flames.

Some of these devices are made to be actively thrown or rolled by users, breaking on impact or fitted with time-delay triggers like conventional grenades. With products like F.I.T. (Fire Interruption Technology), the user pulls a pin and lobs the device into a fire.

Other fire balls are used in passive suppression systems. These are spread out around buildings and detonated in the presence of extreme heat, like sprinkler systems but with less infrastructural overhead (no need to worry about pipes, water pressure or complex systems).

99% Invisible
There Is a Light That Never Goes Out

Sometimes, brave firefighters are called upon to run into burning buildings in order to save people. In most cases, though, fire engines with high-pressure hoses (along with some modern-day fire grenades) are there to help firefighters maintain a safe distance from the flames.

Even with the sophisticated technologies firefighters have today, perhaps there is still room for an even more compact and long-distance weapon in their arsenal, like launchers that fire (or drones that drop) an explosive new version of the ever-evolving fire grenade.