Do you remember… airplane travel? Packing into a tin can with 200 other people all breathing each other’s air? These days most of us are still avoiding plane travel. But, in the Before Times, when we boarded a flight, we all received the same familiar set of instructions.

If you’ve ever flown on a plane, you’ve been directed to study the safety briefing card in your seatback pocket. Every passenger plane, commercial or private, has to have safety cards on board. Mo LaBorde is a reporter who has been collecting safety cards for almost ten years, and one day she started wondering how the modern safety card came about.

In the beginning, safety cards weren’t even really about safety. In the 1930s there was no regulation about what should go on the cards and airlines could put anything they wanted in them. This is because at the time airlines had to convince people to get on planes, so for many decades cards  were all about soothing passengers and selling them on the idea that air travel was safe and glamorous. 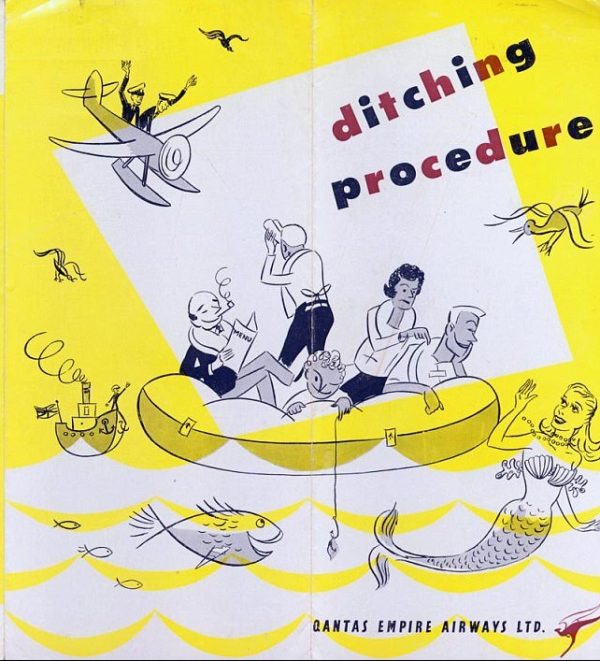 They were essentially miniature versions of those travel posters, like little advertisements for the airlines. The book Design For Impact by Johan Pihl and Eric Ericson, a compilation of historical safety cards, is filled with old cards like this one, many of which are incredibly stylish, but not much else.  If you opened a card, you’d discover the instructions were usually hard-to-follow text. 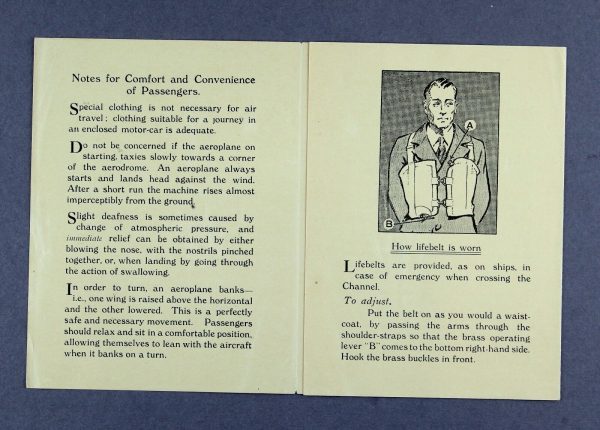 By the mid-60s, carriers like Pan Am actually began begun to make a good faith effort into designing accurate cards. They created “fleet cards,” which were almost like a booklet that you would pick up, and it would have the safety and emergency instructions for multiple plane models in it, and each set of instructions would be in multiple languages. The problem was, no one wants to have to flip through an encyclopedic book in the middle of an emergency.

Things really started to change in the late 60s, when airlines started noticing a troubling pattern when it came to crashes. Psychologist and airplane safety expert Dan Johnson, explains, “Impact survival was possible, but not escape.” Johnson says that in the 60s the airlines knew that their airplanes were technically safer than ever before. They crashed less often and when they did crash, the crashes were increasingly less fatal. All of which should have added up to more survivors.” But what they realized was that survivors weren’t getting off the plane in time.

It turns out that both back then and today if you’re in a serious crash, it’s not the impact that kills you. It’s the smoke and the fire inside the cabin after the crash. So the key to surviving is getting out of the plane as fast as possible. Accident investigators found that, in your average crash, you had 90 seconds to get out of the plane before it became “unsurvivable.” But again and again, all through the 60s and even 70s, passengers weren’t making it out in time.

In 1968 Douglas Aircraft decided to improve their safety record by hiring Johnson and another man named Beau Altman. Altman and Johnson decided to found a company together to improve the airline’s safety procedures. They called it the Interaction Research Corporation, and their specialty was running tests in mock plane cabins full of research participants. They would start by making each test as realistic a simulation as possible. They always made sure there were so many people under the age of six, so many people over the age of seventy and give them only as much information as they’d receive on a normal plane flight.

Then they’d toss a smoke bomb into the plane.

They would create a realistic simulation where the lights would go off and everyone would need to find their way to the exit, and when they did… the exit would be 15 feet off the ground and they would need to slide down an inflatable slide in the dark.

One of the most important things Beau and Dan learned was that one of the very best ways to get out of the airplane in time was to read the safety card. When they had people read the safety cards, and when those cards had the relevant information, the evacuation times improved dramatically. So they began applying what they learned in these experiments to the design of the cards. But since neither Altman nor Johnson were artists, they turned to Larry Bruns. Today, Larry Bruns and Brock Fisher are a grandfather and grandson safety card design team that runs Air Safety Art International, but back in the 60s, Bruns helped design the classic safety card look that we all recognize today.

They used pictures to tell the entire story of how to exit the plane. They zoomed in on specific actions like opening a door. And there were also things you might not necessarily consciously notice, but which really help, like using red for all exit related arrows and making sure the word “exit” is the only printed word in the sequence. The cards contained all these visual strategies that nudged the reader towards comprehension. And as a final design flourish, their cards even fit in the seatback pocket just right, so the title of the card peeks out and entices people to open it up.

Dan, Beau and Larry’s cards got put to the test in March 1977 on the island of Tenerife. Tenerife is in many ways the Titanic of travel. Since it involved two large planes, it’s still the single deadliest aviation accident in history. Why it happened is still up for debate, but what is known is that a 747 belonging to KLM collided on takeoff with a Pan Am 747 that was still on the ground and tore its roof off. On the KLM plane, everyone died, but on the Pan Am flight, 67 people survived,  and it turned out Dan and Beau designed the safety cards on the plane with the survivors. Some of the survivors later explained that they knew how to get out of the plane thanks to the safety cards.

After Tenerife, Altman and Johnson actually testified before Congress about the need for better airline safety procedures, and it’s around then that all visual safety cards pretty much became standard throughout the industry. It also revealed that there are two large hurdles in airplane safety in disaster situations: that some people become so stressed out that they freeze, and that there are many people who don’t read the safety card in the first place.

Altman says the 96% of people who don’t look at the cards fall into one of two categories: Either they just completely resign their fate to the hands of the pilot when they board a plane, assuming they have zero control over the worst-case scenario. Or they have an optimism that’s made of steel. These are the people who never look at the pamphlet because they know how unlikely a crash actually is. The truth is we all need to actively participate in providing for our own safety.