This episode is a collaboration with The Stoop, a podcast hosted by Leila Day and Hana Baba, which features stories from across the black diaspora.

Oprah Winfrey’s hair is an amazing and ever-changing object of design. She’s worn dozens of styles over the years, including weaves and braids. She’s also a natural, meaning she doesn’t use chemical relaxers to straighten her hair.

Oprah gives most of the credit for her great hair to one person: Andre Walker. He’s been her stylist for decades. Walker first met Oprah back in the 1980s. He then traveled the globe with her as she became one of most important media figures in the world. Along the way, he’s redone her hair in endless ways.

But beyond Oprah’s hair, Walker is known for something else: a system that he created back in the 1990s to market his line of hair care products. The system categorizes natural hair types, and it’s often referred to simply as “the hair chart.” The chart identifies four hair types and within each of those categories there are different sub-types. The chart spans straight, wavy, curly, and kinky hair.

For Walker, the chart was all about selling his products. People could use it to identify their hair type and then buy a complementary product. But the chart has gone way beyond his own hair care line and become a way some African-American people talk and think about hair. Not everyone thinks the categories are helpful, and some of the criticism has its roots far back in American history.

Thick, kinky hair was long considered a sign of health and wealth in parts of Africa. But in the United States, skin tone and hair texture were used to divide enslaved African people. Lighter skin and straighter hair could mean more privileges, like working in the house and not in the fields. This idea of “good hair” and “bad hair” all evolved during slavery, explains Ayana Byrd, co-author of the book Hair Story: Untangling the Roots of Black Hair in America. 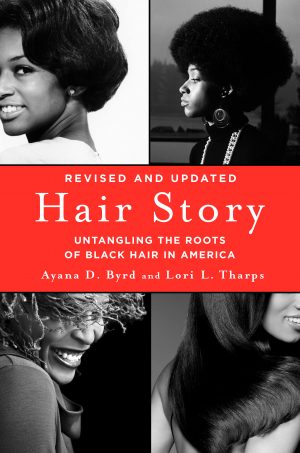 Even after slavery ended, these racist beauty standards persisted. In the early 1900s, some people tried to straighten their hair by putting oil on it and then wrapping it with heated flannel. This process could cause burns and hair damage. There were even black churches that would hang a comb on the front door. If a person with thicker, curlier hair couldn’t pass the comb through it, they wouldn’t be allowed to worship at the church.

In the 1920’s hot combs were used to straighten hair, and then came a hair style known as the “conk,” which was popular with a lot of black men, including famous jazz musicians like Cab Calloway and Duke Ellington. The conk was the name of the style but it as also the name of the relaxer itself, which was made using a harsh chemical called sodium hydroxide, or lye, which could cause serious burns.

The Conk eventually went out of style, but relaxers made with sodium hydroxide continued on, and became more and more popular.

Then, in the 1960s, things began to change. The civil rights movement brought on the beginning of a new shift that was all all about embracing blackness, which also meant embracing natural hair. Afros were suddenly everywhere. Instead of straighteners, people began seeing products that were meant to compliment their natural hair.

Afros continued to be an important style, but in the 1980s, a new chemical hairdo was on the rise. The Jheri curl created a bigger and looser curl pattern. It was a turn away from the political statement of the afro, and “so the ads really shifted away from having anything to do with black culture and community-building and black identity,” explains Byrd, and was more about partying and fun. But Jheri curls were very product-heavy, requiring the daily application of an “activator.” As this style faded back out of fashion, old relaxers started to come back.

Then, in 2009, comedian Chris Rock produced a documentary called Good Hair — after his daughter asked him: “Daddy, why don’t I have good hair?” In the documentary, he shows just how toxic the chemicals found in many relaxers can be.

Rock’s film brought up some deep-rooted issues and may have also impacted the chemical relaxer business. Black consumer spending on relaxers is down 30% since since 2011.

Which brings us back to Andre Walker’s hair chart.

As people decide to go natural, many are turning to the internet for advice, and they’re discovering Walker’s chart, which categorizes hair from 1A (the straightest) to 4C (the curliest).

But some criticism has emerged. Even in this new online community of naturals, some of the videos are reinforcing old biases about straighter hair being better. Some videos instruct women about how to go from very curly hair to less curly, straighter hair. They don’t advocate using chemicals, but they still subtly imply that straighter is better.

“There’s been a lot of criticism against a lot of natural hair websites,” says Byrd, “that they focus too much on ‘3B’ hair as opposed to ‘4C’ hair and that the tighter your curl … and the kinkier your hair is the less represented you are on these sites.”

But Andre Walker says he just wanted to create a variety of products for different kinds of hair. It was not his intention to create any kind of hierarchy. He explains that lower numbers being straighter isn’t mean to imply they are better, it’s just a measure of texture from low to high.

Nonetheless, this shows just how sensitive the topic is — that something as simple as a numbering system could cause so much controversy. There is so much racism and colorism and years of painful history tangled up in the question of hair that it inevitably becomes deeply personal.