Tech analysts estimate that over six billion emojis are sent each day. Emojis, which started off as a collection of low-resolution pixelated images from Japan, have become a well-established and graphically sophisticated part of everyday global communication.

But who decides what emojis are available to users, and who makes the actual designs? Independent radio and film producer Mark Bramhill took it upon himself to find out and, in the process, ended up developing and pitching his own idea for a new emoji.

Writing a proposal for a new emoji was not Bramhill’s initial plan.  He was interested in the way emojis have “become this incredible new part of language … universally spoken and agreed-upon” and wanted to learn more about their origins and designs. He decided to work on a story about emojis for his podcast, Welcome to Macintosh, and reached out to the creator of Emojipedia, Jeremy Burge. 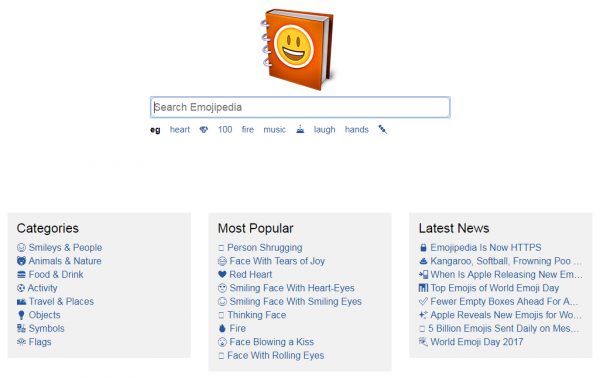 Burge’s site catalogs emojis and their changes over time. He told Bramhill that the first set of emojis was designed in 1998, for a Japanese cell phone company. A designer named Shigetaka Kurita had designed 176 little images, which were 12×12 pixels each  (very low-resolution graphics), at a time when texting was still very new.

These early emojis allowed Japanese cell phone customers to send images for the first time, in addition to words and numbers. However, depending on which Japanese mobile carrier you were using, emojis might not translate from phone to phone. There were no encoding standards for these images, so people on different cell services, might see completely different emojis. For example, if someone sent the emoji for “hamburger,” the recipient might see the emoji for “poo.”

When American cell companies went to enter the Japanese market, they saw that these little pixel images were incredibly popular- and that they needed standardizing.

American communications companies turned to the Unicode Consortium. This is the non-profit that standardizes the way text is encoded on the internet. Nowadays, we take it for granted that you can open up an email or a website and be able to read it, but when the internet was new, “people were really used to getting e-mails or looking at websites and [seeing] jumbled up garbage on the screen, because it was the wrong encoding,” explains Mark Davis, the president of Unicode. For every language, on every service provider, Unicode makes sure that every letter of every alphabet is encoded in the same way- so that its associated with the correct digits to represent it. Davis describes his organization as the  “people behind the curtains making sure that everything works, kind of like plumbers … you don’t notice them as long as the water keeps flowing.”

Unicode seemed like the perfect group to regulate emoji encoding- but when Unicode was first approached about emojis in the early 2000s, they weren’t interested. Emojis seemed like a passing fad and Unicode wasn’t sure they’d be worth taking on. But around 2006, Unicode realized that emojis were here to stay, and started creating a core library out of the many different hodgepodge emojis already being used among different Japanese cell phone companies. (This is why the core library includes multiple kinds of trains, many different clocks, etc.) 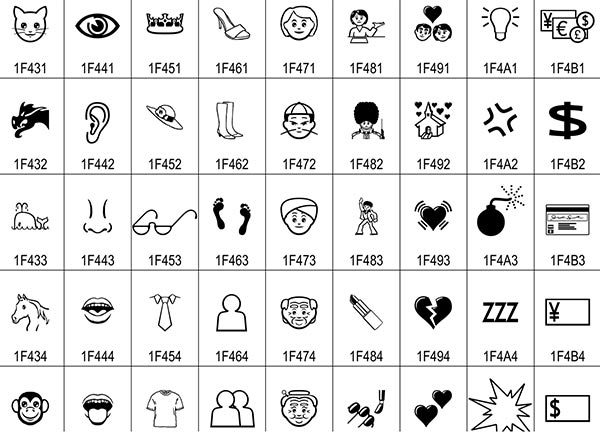 Unicode decided they would bring in new emojis to this core library, but that each addition had to be considered very carefully. For each new possibility, Davis and the group ask themselves: “Does this break new ground … or is it going to be extremely popular?” Four times a year, Unicode meets to consider proposals for new emojis. Once approved, emojis are permanent additions to language — there is no removal process.

But who can submit a new emoji for consideration? Mark Bramhill asked Jeremy Burge, of Emojipedia. “And it’s what turned this story from idle curiosity into a year-long journey.” When Bramhill learned that anyone can submit an emoji, he immediately knew he had to write  an emoji proposal of his own — “What better way to understand this whole process than to go through it myself?”

When writing a proposal for a new emoji, there are some rules of thumb. First of all, the demand for the emoji should already exist, and submitters should have data to back it up (citing hashtag usage on social media sites and Google search trends). You don’t want to create a petition for the emoji- the need for the symbol should already be apparent.

Secondly, the emoji should be visually distinctive, and unlike anything else already in the unicode library. For instance, if you wanted to propose “high five,” Unicode might think that already looks too much like “praying hands.”

Also, the emoji shouldn’t be too obscure (like a rare animal) but it also can’t be too vague (like “an animal” ). The proposal also shouldn’t be something that could turn out to be a fad (say, a fidget spinner). After all, the emoji will be there forever, and needs a degree of longevity. Unicode has also placed blanket bans on emojis for logos, brands, specific people, and deities.

Bramhill asked Burge for an idea that might fit all of these conditions: an emoji that was popular but unique, sufficiently specific but widely applicable. Burge came back with “yoga.” “I think that would have a high chance of getting through,” Burge explained, “because it’s a popular activity with a lot of people around the world.”

Bramhill had never meditated or done yoga, but quickly became intrigued as his research progressed. He learned that over 1/3 of Americans practice yoga at least once a year, the United Nations designated an “International Yoga Day” with unanimous approval, and that the hashtag #Yoga is even more popular than #Running on Instagram.

Bramhill began to compile this information, and search for an image that could stand for meditation and yoga. Rather than, say, an image of a rolled-up yoga mat, or a person balancing on one leg, Bramhill opted to propose the image of a person sitting cross-legged, in a lotus position.

After cobbling together some clip art to demonstrate his concept, Bramhill ran his proposal by Jennifer 8 Lee, who has a non-voting seat on the Unicode subcommittee for emojis. She had also been through the emoji-submission process herself, successfully proposing the Dumpling and Fortune Cookie emojis. (Note: Lee appeared previously in the episode of 99pi embedded below).

Lee’s feedback: the proposal looked good, but the image didn’t really represent the idea as well as it could. Bramhill hired a designer, Aphee Messer, to make a better visual and strengthen his case.

A few weeks after submitting his very elaborate proposal, Bramhill heard back: his emoji idea had passed the first round of judgement. Now it would move on to an evaluation by the Unicode Technical Committee, in San Jose.  Bramhill had the option to come to the meeting himself and pitch his emoji in person,  so he bought a plane ticket to California to make his case.

Upon his arrival at the IBM headquarters in San Jose (where Unicode was using a meeting room), Bramhill ran into another person pitching an emoji: 15-year-old Rayouf Alhumedhi. Her submission, “person with a hijab”, carried a lot of personal significance. “I felt like [it would] be nice for me to have an emoji image of myself on the keyboards that I could use,” Alhumedhi explained. This image would also fit into Unicode’s mission to better unite people and cultures through digital language.

Alhumedhi and Bramhill both presented their ideas to the Technical Committee. It was a group of about twenty people, and Bramhill’s presentation lasted just about five minutes. Afterwards, he took a few questions, and then he had to leave the room when it came to a vote.

If approved, these emojis would become part of the library. Various platforms like Google, Apple and Facebook would then interpret them, designing characters based on the idea of each emoji.  From company to company, different emoji characters might be facing different ways, or have different outfits on, but they should all illustrate the same basic concept.

At tech companies, a lot of thought goes into how Unicode-approved emojis will actually look, and how they will be interpreted across cultures around the world. An American Gothic-style farmer with a pitchfork, for instance, may not be as universal as a farmer standing with a stalk of grain. It’s nearly impossible for emojis to be relatable and applicable to every kind of situation and identity around the world, but emoji designers, as well as Unicode itself, is taking great pains to be as all-encompassing as possible.

“This is not a good system,” says Keith Winstein, who teaches computer science at Stanford. “You shouldn’t have to ask these people’s permission,” he says, referring to the gatekeepers at Unicode. The emoji approval process can last for years, and Winstein argues that its just not fast enough to remain current.  One alternative he suggests: on some platforms, like Slack, people can upload tiny images and use them like emoji. These don’t require special encoding to work within the platform, and you can make “emoji” of whatever you want.

Of course, there is also something to be said for the universality of emojis, and the Unicode approval system. Bramhill notes that if we went to a system where we just sent tiny pictures, rather than encoded emojis, it would get rid of the universal standardized language of pictures that people all over the world currently share. 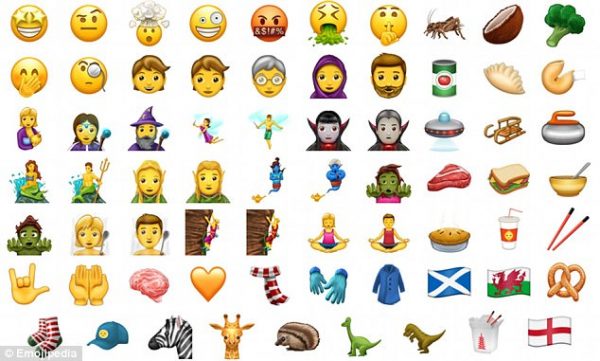 As for Bramhill’s proposal: a few days after presenting in San Jose, he was scrolling on Twitter and saw an Emojipedia post about newly-approved emojis. Along with “Person With Headscarf,” “Grinning Face With Star Eyes,” and “Face With Open Mouth Vomiting,” there was his: “Person in Lotus Position.” These will all be available on different platforms later this year.

Previous Episode: The Great Dismal Swamp
Next Episode: Notes on an Imagined Plaque

The launch of the Atomic Age was marked... [Read More]

Everyone has seen renderings of icebergs with small... [Read More]