A design born of global disaster, the Laufmaschine (literally: running machine) was created in the wake of a war as well as a famine-fueling volcanic eruption. This pivotal innovation in wheeled transit was developed by Karl von Drais, a German inventor thinking on his feet about how to address mobility in the midst of a world in crisis.

The backdrop was bleak. 1816 came to be called the Year Without Summer, a time of climate abnormalities driven in part the eruption of Mount Tambora the year prior. Subsistence crises unfolded around the world, from China to the United States.

In Europe, the ensuing “volcanic winter” wreaked havoc on crops, driving up prices and spurring theft, riots and other violence. Brown and red snow (colored by volcanic ash) appeared as ill omens from the skies above. For Europeans in particular, the impact of this natural disaster was compounded by the recent devastation of the Napoleonic Wars. Famine was everywhere, and to make matters worse: malnutrition drove the spread of disease across the continent. 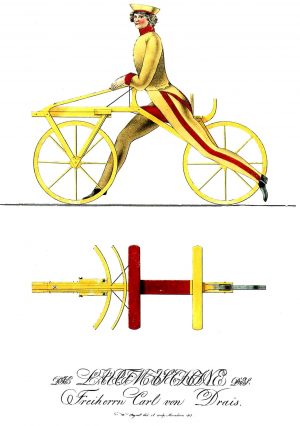 Among other grim realities of the times, many horses were either left to starve or slaughtered for meat and hides. With this conventional mode of transportation in desperately short supply, von Drais came up with his wheeled alternative that relied on human power instead.

Users of his wooden running machine would sit in a kind of saddle and propel themselves with their feet, not on pedals but along the ground. He demonstrated that this device could carry a person around 40 miles in just four hours, an impressive speed and distance at the time. It was not the easiest vehicle to use, requiring practice to maintain balance, but was still a big breakthrough.

In hindsight, it seems surreal that a device that would become known as a “dandy horse” would emerge from such a dark period in modern history, but it caught on quickly. The design spread to France and England and within a short while became so popular that some municipalities saw fit to ban such devices entirely. 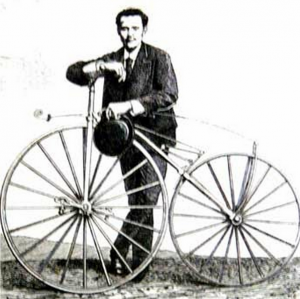 Thankfully for the world, the crisis passed and climate returned to normal, but in the wake of it all was this new creation. And while its popularity dwindled somewhat as countries recovered, people kept working on it. A thing that was made to address an immediate problem became the basis of an evolving mode of transportation. Within decades, wood was traded out for steel and pedals were added to the frame. The bicycle as we know it today slowly took shape, and in a way things have come full circle with (albeit electric) standing scooters gaining popularity in recent years. 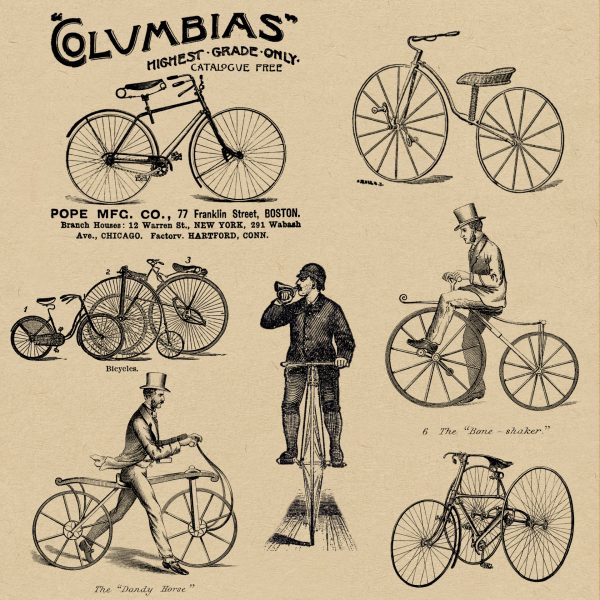 Tom Standage of The Economist wonders if the current global pandemic might eventually yield similar silver linings, apparent only in hindsight when the worst of the crisis finally passes: “What innovations might the coronavirus outbreak of 2020 spawn? The pandemic will surely inspire new approaches to online education, say, or package delivery by drone – and, no doubt, some less obvious ideas. Who would have guessed, after all, that a volcano would give rise to the bicycle?”