Cities around the world have distinctive modes of transportation — the canals of Venice, the double-decker busses of London, and the Twin Cities (of Minneapolis and St. Paul) have skyways. In both downtowns, there are vast networks of climate-controlled pedestrian bridges that reach over the streets and connect adjacent buildings.

Walk along almost any downtown street in the Twin Cities, and you’ll see a series of these enclosed glass bridges tying together huge office buildings and shopping centers. Thanks to the skyways, people can park in a heated garage, go into work, run some errands, maybe go to the gym, entirely in short sleeves on a sub-zero day. People legitimately brag about how many weeks they can go without stepping foot outside. Minneapolis has the oldest and largest contiguous skyway network in the world and over the years this system has played prominent roles:

Urban geographer and writer Bill Lindeke gives architectural skyway tours in the Twin Cities. He says the visitors on his tours are justifiably impressed. The whole skyway system comes across as a grand civic achievement. They can seem futuristic, triumphant, almost utopian — cozy micro-city within the city, where Twin Citizens can look down at the icy street beneath you, smug in your short sleeves, and collectively laugh in the face of winter. Yet Lindeke actually hates skyways and he isn’t alone — a lot of residents and urban planners want them gone. For critics, skyways are problematic because of who gets to enjoy them and who does not as well as their impact on street activity below.

The skyways haven’t always attracted this kind of criticism. In the beginning, long before people like Bill Lindeke turned against them, they were heralded as the salvation of a struggling downtown. In the 1950s, like many cities across the country, Minneapolis was trying to stay lively, or even occupied, in the postwar era of white flight. Downtown shops suffered as people moved out to the suburbs, where, among other things, something new had come along: shopping malls.

Over the decades, more and more shoppers and businesses would decamp from the city to the suburban oasis. But in the late 1950s, a loose alliance of Minneapolis developers, business owners and city officials began formulating plans to lure people back to downtown. Ambitious ideas were proposed, like the installation of pedestrian underpasses or the opposite: sinking street traffic below the surface while turning aboveground roads into pedestrian plazas.

In the end, the winning idea came from a local business owner named Leslie Park who saw a way to make downtown more like a shopping mall.  He got the city to grant him air rights, not just for the new building he was constructing, but for the street in front of it. And once it was finished, like a lot of other places downtown, this new building had the usual set of stores on the first floor, but above: the city’s first skyway, connecting two buildings that each featured second-story retail as well. And that transformation of the second floor into a space for pedestrians and workers would go on to reshape the Twin Cities. Developers began to see the appeal of two levels of retail while shoppers and employees enjoyed the ability to travel above traffic. Other building owners began to cut deals to join their structures, too. 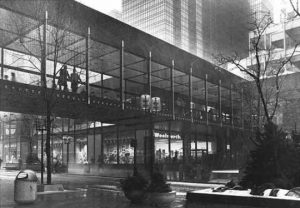 In Minneapolis, skyways became a standard feature in new construction. Impressed by the new indoor development in their sister city across the Mississippi River, St. Paul officials started developing their own city-run skyway system. Everyone wanted to be on the second floor. Even classic downtown mom-and-pop shops and shoe shines moved to the skyways, and customers followed. Within a few years, the average downtown worker in Minneapolis and St. Paul was spending twice as much money as their counterpart in other cities during their lunch break. In the skyways, it was just so easy to buy things, uninterrupted: you could walk to the food court for lunch, get your shoes shined along the way, pick up a gift or a new watch all without stopping for traffic or even putting on your coat. 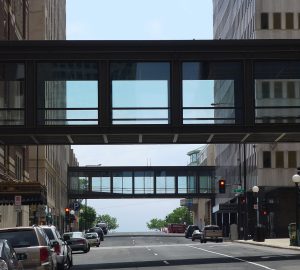 James Garrett, Jr. is an architect in downtown Saint Paul. He lives and works in buildings connected by the skyways. And as a kid in the 1980s, the skyways were his happy place. Kids who grew up in the early days of the skyway network played in the halls and enjoyed exploring the city. Over the decades, though, he noticed a shift — there were a lot more white-collar workers than there were kids from nearby neighborhoods. There was also an increased police and security presence. to the point where the skyways stopped being fun, or even comfortable, especially for young Black men like Garrett. And in a way, this is precisely what they were designed to do — not to be accessible spaces, but rather to replicate the suburban white experience in the Twin Cities’ downtowns.

The cities were changing outside, too. Once it was assumed that new buildings would be connected on the second floor, architects and planners began a long trend of designing away from parks and outdoor areas, and toward indoor spaces. They turned their back on the street. 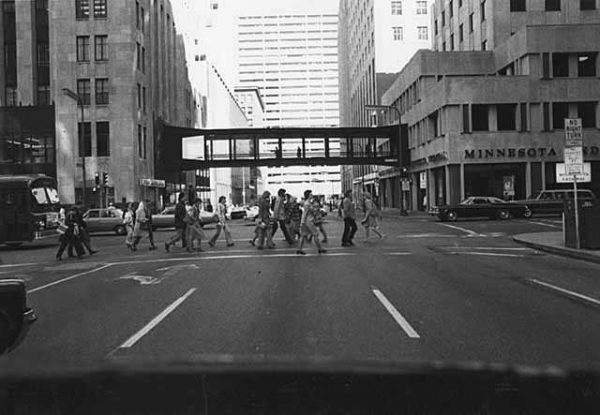 Meanwhile, since the Minneapolis skyways were privately owned, the developers had no obligation to be welcoming. The entrances to the system were often obfuscated in high-end hotels or expensive stores. Every now and then, architectural consultants hired by one of the cities would suggest ways to improve skyway access. But some property owners have argued easier entrances would bring the “wrong element” into the skyways. Others complained about the potential costs.

In Minneapolis, the skyways have always been privately owned, based on agreements between connected buildings’ landlords. Thus, lingering too long in the passageway can get you cited for trespassing on private property. And while St. Paul’s system is technically public, they still mostly connect privately owned office buildings and shopping centers, and are monitored by both private security and police. So in practice, the two cities’ systems have both grown to feel like restricted spaces that aren’t particularly welcoming to anyone besides the mostly white and mostly white-collar commuters who work downtown.

Meanwhile, as the skyways grew less appealing to anyone who didn’t work there, anyone who didn’t work there simply stopped going. By the early ’90s, far fewer people were using the skyways to do weekend shopping or enjoy nighttime entertainment, just as building owners became less inclined to attract non-work-day crowds. And on the streets below, where life was drained to populate the skyways and the cities were redesigned around them, the streets grew emptier. Then to top it all off: the Mall of America opened — a megamall to end all malls, complete with a gigantic indoor amusement park.

The answer, some argue, is to tear down the skyways. There are plenty of bustling neighborhoods in the Twin Cities known for their culture, attractions, and street life, even in the winter, proving that Minnesotans will spend time outside in cold weather if given the chance. The other option is to make the skyways work — rethink their accessibility and use their strengths to reshape the Twin Cities for the better.

For even more stories and photos of specific skyways, be sure to check out reporter Katie Thornton’s original longform essay about the history of the skyways, on Instagram at “itskatiethornton,” or on her website.

99% Invisible
Life and Death in Singapore