Developed in the 1970s, the comic character Judge Dredd was originally set to occupy a dark futuristic version of New York City. But as concept artwork was developed, that plan was quickly revised and Mega-City One was born — a metropolis spanning much of the Eastern Seaboard. Within it, Judges (like Dredd) patrol the streets, zipping between largely self-contained towers to dispense severe forms of justice.

The 2012 film Dredd centered around one such structure, Peach Trees, one the most corrupt Mega-Blocks in the city. “You could live and die within one of these blocks and never really set foot” outside of it, one of the film’s writers explains in the clip above. It looks much like a huge, dystopian version of Le Corbusier’s tower-based urban designs and has been compared to real-world structures like the Ponte City Apartments. But Peach Trees is even bigger — almost a city unto itself.

The specific geographical details and total population of Mega-City One have varied within the Dredd canon over the decades, but dense urbanism is a persistent theme. Yet this idea of packing people into close self-contained quarters or interconnected structures is not strictly dystopian — indeed, many visionaries have imagined hyperdense projects along similar lines but with more utopian outcomes in mind.

A portmanteau of “architecture” and “ecology”, the term “arcology” reflects a vision that high density can help foster sustainability. It was coined by Paolo Soleri, who began construction on a Utopian “arcolological” project in central Arizona in the 1970s. Today, Arcosanti bills itself as “an urban laboratory focused on innovative design, community, and environmental accountability” aiming to “actively pursue lean alternatives to urban sprawl.” At least in theory, it purports to be about maximizing human interaction and shared access to infrastructure while minimizing environmental impacts.

Arcological intimations can also be seen in Frank Lloyd Wright’s Broadacre City (above) as well as Buckminster Fuller’s proposed Old Man River’s City project (below), a domed metropolis with a capacity of 125,000 designed to address housing on the outskirts of St. Louis.

Wright’s design hints at the possibility of serving various needs in a single area (agriculture, transportation, community) while Fuller’s suggests a physical enclosure could contain an entire city. In the end, neither of these visions got off their designers’ drawing boards.

Outside of limited bio-dome endeavors, an entirely connected architectural environment may sound extreme and unrealistic. But many cities are already quite interconnected in ways that call simplistic concepts of boundaries between buildings into question.

In places like Minneapolis, Minnesota and Calgary, Alberta extensive skyway networks join many (or in some cases: most) downtown buildings, linking them into a de facto megastructure. Meanwhile, in Houston, Texas, a series of underground tunnels connects the city. These passages help citizens in hot and cold climates traverse their cities while remaining in contiguous, temperature-controlled spaces.

In even harsher conditions there are correspondingly more extreme examples. Fermont, Quebec has a huge building designed to help screen out icy winds — but it also houses apartments, stores, schools, bars, restaurants, hotels, a supermarket and a swimming pool. Similarly, in Whittier, Alaska, virtually everything happens under one roof, cozily insulated from annual snowfalls of up to 400 inches.

For now, though, it is still in science fiction and speculative urban designs that we find the most radical arcologies. An entire arc of Doctor Who was recently devoted to the layered habitats of a huge colony ship, almost a world unto itself. A number of different arcologies are also explored in Neal Stephenson’s speculator Seveneves. Other examples can be found in Robert Silverberg’s The World Inside, Peter Hamilton’s Neutronium Alchemist and Paolo Bacigalupi’s The Water Knife.

Speculative arcologies also extend beyond genre fiction. In the 1960s, members of the avante garde architectural group Archigram dreamed up concepts like the Plug-In City and Instant City. Consider, for instance, their Walking City, a robotic metropolis that takes Le Corbusier’s idea of houses as “machines for living in” quite literally and proposes cities as mobile habitats that can roam the countryside. 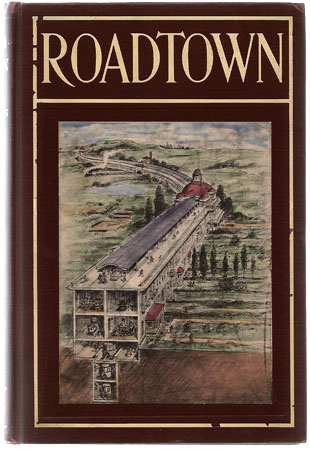 And a half-century earlier, Edgar Chambless released Roadtown, outlining his idea for a linear city built on top of a railway line — not itself mobile, but built around mobility.

“The idea occurred to me to lay the modern skyscraper on its side,” writes Chambless, “and run the elevators and the pipes and wires horizontally instead of vertically. Such a house would not be limited by the stresses and strains of steel; it could be built not only a hundred stories, but a thousand stories or a thousand miles …. I would take the apartment house and all its conveniences and comforts out among the farms by the aid of wires, pipes and of rapid and noiseless transportation.” 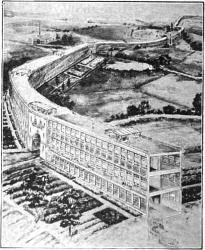 Of course, problems arise when putting some of these plans into action. Imagine Roadtown today: trains are still loud over 100 years later, so noise would be an issue. Also, linear development means longer average travel times between places as compared to cities that radiate outward from a central point.

Arguably, this and other speculative arcologies are in essence simply extensions of reality. Railroads, for instance, have a long history of generating track-side growth, so building up and over them seems like a natural next step as surrounding density drives development.

In the end, a pure arcology-as-such may never become a complete reality, but the driving ideas can already be found in a lot of urban environments — dense cities benefit from consolidated infrastructure, the sharing of resources and land-efficient vertical development.