On the border of Virginia and North Carolina stretches a great, dismal swamp. The Great Dismal Swamp, actually — that’s the name British colonists gave it centuries ago. The swamp covers about 190 square miles today, but at its peak, before parts of it were drained and developed, it was around ten times bigger, spanning roughly 2,000 square miles of Virginia and North Carolina.

And it’s understandable why people called the swamp “dismal.” Temperatures can reach over 100 degrees. It’s humid and soggy, filled with thorns and thickets, teeming with all sorts of dangerous and unpleasant wildlife. The panthers that used to live there are now gone, but even today there are black bears, poisonous snakes, and swarms of yellow flies and mosquitoes.

But hundreds of years ago, before the Civil War, the dangers of the swamp and its seeming impenetrability actually attracted people to it. The land was so untamed that horses and boats couldn’t enter, and the colonists who were filing into the region detested it. William Byrd II, a Virginia planter, called it “a miserable morass where nothing can inhabit.” But people did inhabit the swamp, including thousands of enslaved Africans and African Americans who escaped their captors and formed communities in the swamp. This “dismal” landscape was the site of one of the most remarkable and least told stories of resistance to slavery in American history.

References to the Great Dismal Swamp — and the escaped slaves who settled there — started appearing in newspapers and other sources in the 1700s. But archaeologists have found evidence that people were living in the swamp long before that. When British colonists arrived in the region in the early 1600s, indigenous Americans began moving to the swamp to seek refuge from the Europeans.

But around 1700, the demographics of the swamp started to shift. Slavery had become widespread, and the swamp became a place for escaped slaves to hide out.

The enslaved people who found refuge in the swamp came to be known as “maroons” (from the Spanish “cimarrón,” meaning wild or untamed). Unlike other runaways, some of whom headed to northern cities, maroons lived in the wilderness, often in difficult-to-reach places. They were determined to build their own self-ruled communities, with landscape and the forces of nature serving as a buffer between their new lives and the society that enslaved them. Over centuries, the swamp became home to thousands of self-sufficient maroons, and it also served as a stopping point for others who were fleeing North on the Underground Railroad.

Maroon communities formed on little plots of high ground — islands of relatively dry earth that might cover twenty acres or more. Such islands could each house a few dozen maroons. And based on archaeological evidence, it appears that the maroons built elevated cabins that they lifted above the moist ground using wooden posts. They most likely cultivated rice and grain fields and participated in trade and cooperation with maroon communities on neighboring islands, but it’s hard to say for certain.

Professor Dan Sayers is a historical archaeologist at American University and a leading expert on the Great Dismal Swamp. He and his team have been leading excavations in the swamp for years. And while they have recovered thousands of artifacts from these settlements, they’ve recovered very few manufactured goods from the outside world. Sayers says this speaks to the communities’ isolation and self-sufficiency. They made do with the resources they had in the swamp: timber and other organic materials that have long rotted away, as well as old stone tools left behind by the indigenous American inhabitants who preceded them.

The Great Dismal Swamp is not the only place maroon settlements formed. There were maroons in other British colonies and in Spanish and Portuguese colonies as well. Experts say anywhere slavery existed, there were people who escaped to live in the wilderness. In some cases, maroons clashed with colonial forces, as they did in Jamaica’s Maroon Wars. (There’s actually a settlement in Jamaica where descendants of maroons still live: a place called Mooretown, tucked away high in the country’s eastern mountains.)

In the U.S., maroon communities formed all across the country. Some maroons lived in the woods while others lived in the mountains or swamps. Some even lived in tiny underground shelters that they dug out in wild areas near plantations.

Dr. Sylviane Diouf, a historian of the African diaspora, says subterranean maroon shelters were often ingeniously constructed. Some had timber-supported roofs complete with trap doors that hid all traces of their presence.

Diouf has found that most maroons tended to live either on the borders of plantations, near their family and friends, or out in places more removed from society — the hinterlands.

Wherever they were, the maroons all had something in common. They wanted freedom, yes, but perhaps even more, they wanted autonomy — a kind of control over their lives that wouldn’t be possible even as free black people in the North … even if it meant being surrounded by poisonous snakes and panthers. One maroon named Tom Wilson said, “I felt safer among the alligators than among white men.”

In the Great Dismal Swamp, the maroons eventually faced threats to their autonomy and isolation. As more and more Europeans arrived in the area during the 18th century, land grew scarce and more valuable. Wealthy colonists saw economic opportunity in the swamp, including future president, George Washington. His company and others started cutting canals through the swamp using slave labor, and timber companies set up encampments in the swamp for enslaved workers. They cut down trees, which they turned into shingles and shipped all across the region. By the mid-1800s, tracts of land were cleared of trees, and there was a network of canals through the swamp. 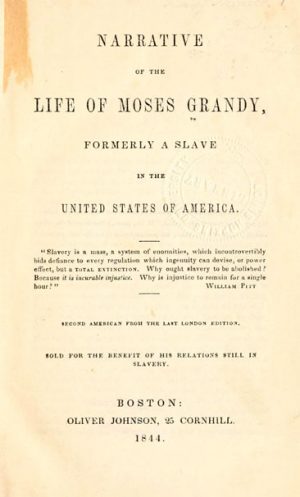 Contact between enslaved shingle-makers and maroons became pretty common. Sometimes maroons would help workers in exchange for goods from the outside world.

With all this new industry and all these new canals, there was demand for skilled watermen who could navigate the waterways and transport shingles to port. Moses Grandy was one of those watermen. He was enslaved in the region, born in Camden county North Carolina in 1786. But one day, during his time on the canals, Grandy fell ill. And likely because of his familiarity with the swamp and his interactions with the enslaved shingle-makers (and probably the maroons who helped them, too) he decided to recover in the swamp. He ended up staying there for a whole year.  Eric Sheppard, a distant relative of Grandy who now leads tours to to the Great Dismal Swamp, believes Grandy depended on those people when he was sick. Eventually, he recovered and managed to buy his freedom in 1833. He became part of the abolitionist movement and even traveled to Europe to speak about his experiences.

Professor Sayers’s research suggests that maroon communities of the Great Dismal Swamp began to disperse around the Civil War.

It’s only in the past few decades that researchers have started to study most U.S. maroon communities in any sort of depth. For a long time, they were barely a footnote in U.S. history. Sayers and Diouf believe this wasn’t just an oversight. Black people taking their lives into their own hands and being self-ruled just has not been part of the larger discourse of this country, says Diouf. Eric Sheppard agrees. A lot of important African American history has been neglected by our education system, he says.

In 2003, several sites in the Great Dismal Swamp were added to the National Parks Service Network To Freedom, which recognizes 400 sites that were involved in the Underground Railroad.

Today, the largest remaining part of Great Dismal Swamp is a national refuge stewarded by U.S. Fish and Wildlife Service, who aim to preserve and protect the unique habitat of the swamp. 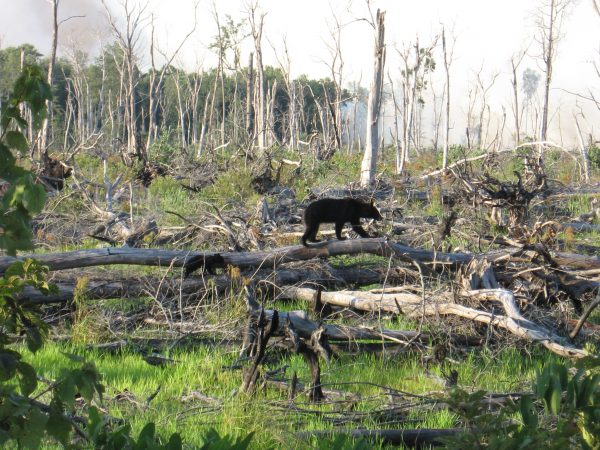 And thanks to Eric Sheppard, Sylviane Diouf, Dan Sayers and others, the history of the maroons who lived in the Great Swamp is finally being acknowledged and shared with the rest of the world.

Previous Episode: The Stethoscope
Next Episode: Person in Lotus Position