On January 3, 1979, two officers from the Los Angeles Police Department went to the home of Eulia May Love, a 39-year-old African-American mother. The police were there because of a dispute over an unpaid gas bill. The officers approached her, and Love allegedly threatened them with a knife. They fired twelve times and killed her.

Neither of the two officers involved were prosecuted for the killing.

Even though police shootings had been happening for years — and are still happening today — the killing of Eulia Love received more media attention than normal. The Los Angeles Board of Police Commissioners responded by recommending changes to training and the way shootings were investigated.

The killing also led the department to research non-lethal weapons to see if there was some alternative that would reduce the LAPD’s reliance on guns. Daryl Gates, the Police Chief at the time, told the L.A. Times, “What we need is that thing used in Buck Rogers… to zap’em, freeze’em, stop’em.”

In the 19th century, when police first started to patrol the streets of American cities, many carried sticks — a short one and a longer one. The longer stick became known as the “nightstick.” It’s gone by other names too, like the billy club, the truncheon, and the baton.

By the early 1900s, lots of police departments across the country had started equipping their officers with guns, but nightsticks remained the alternative weapon of choice.

In the 1960s, that began to change, as police departments looked for new weapons to control large crowds. Many of these, like tear gas, came straight from the military. But some departments started using a new electrical weapon: the cattle prod. Often used in the South during the Civil Rights movement, the prods became especially offensive and contentious to many in the public. 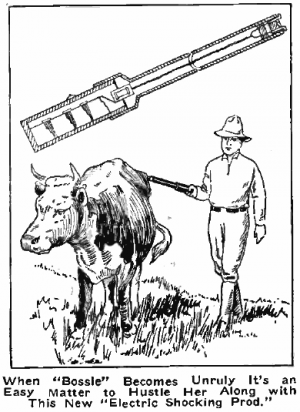 But there were also proponents of electrical weapons. In 1968, Richard Dougherty, a former Deputy Police Commissioner of New York City, said, “better a few jolts of electricity than a knockout blow on the head….What is a nightstick after all? It’s a club… Why in this age of science…do our police have to use a weapon right out of the stone-age?”

As it turns out, a scientist and inventor named Jack Cover was thinking about similar questions. Cover worked as an aerospace scientist and had been involved with NASA’s Apollo program. In the late 1960s, as images of protests and police violence saturated the nightly news, he thought a weapon that temporarily immobilized a person, at a distance, using electricity, might be the solution. Cover’s idea for the weapon came after reading about a hiker who became stuck to an electric fence — unable to move, but otherwise relatively unharmed.

After several years of development, he invented a weapon that he named after a science fiction novel from his childhood called “Tom Swift and His Electric Rifle.” To name the weapon, Cover took the initials from the book title (T.S.E.R), then he added an A to make the word easier to say: Taser.

The Taser used a small gunpowder charge to fire two metal darts attached to a fine wire, carrying 50,000 volts of current from a rechargeable battery. When both darts hit a person, electricity would flow along the metal wires, causing their muscles to tense up involuntarily.

Cover patented his “weapon for immobilization and capture” in 1974 and began approaching police departments about buying his invention. But police were not interested. Nor were the military or airlines. Throughout the 70s, Cover tweaked the design, and then finally, in 1979, he found a good match — one of the biggest police departments in the country. The LAPD.

Since the killing of Eulia Love, the department had looked at many possible non-lethal weapons: chemical sprays, bean bag rounds, rubber bullets, even tranquilizer darts. None were acceptable.

So when Cover came along with his Taser, the LAPD was intrigued. But first the department needed to see how the weapon would work, so they took the Taser out onto the streets of South Los Angeles and began to test it, using it on people they were trying to subdue or apprehend. After testing, the department determined the weapon was effective and they ordered several hundred. Other police departments would soon follow.

Today Tasers are a huge business, and almost all are made by one company: Taser International. Over 80% of all law enforcement departments in the U.S now use Tasers, or some type of stun gun.

When Jack Cover died in 2009, his wife told the New York Times that her husband believed his invention had saved a hundred thousand lives. But it’s questionable as to whether any claims about the life-saving effectiveness of Tasers can be made. Data on both police shootings and Taser use are notoriously unreliable.

Tasers now use compressed gas instead of gunpowder. But the basic function remains the same. Darts connect with the target to form a circuit. Each Taser cycle typically lasts five seconds. Producer George Lavender underwent a voluntary test which lasted about two or three seconds before he signaled the deputies who tasered him to stop. Lavender said it was the most intense pain he had ever experienced.

According to a report by Amnesty International, medical examiners have listed Tasers as a cause — or a contributing factor — in more than 60 deaths in the United States between 2001 and 2012. A 2014 article in the journal of the American Heart Association concluded that the Taser could cause cardiac arrest.

Taser International’s training materials warn that its weapons can “cause death,” but the company has released statements stressing that they are “generally safe and effective.”

One of the goals in adopting Tasers was to improve the relationship between police and the communities they serve. But it’s not clear that Tasers are succeeding at this central purpose. In fact, some researchers have found that cops are reaching for their Tasers far too quickly and too often in situations that don’t justify it. In some departments, the Taser has become the default compliance tool.

And while information on Taser use across the country is patchy, in several jurisdictions there’s evidence that they’re being used disproportionately on people of color, juveniles, and people with mental health issues.

A 2016 Department of Justice report found that in Baltimore, Maryland, police use of Tasers was often “unnecessary and unreasonable.” Additionally, The Baltimore Sun found that people were sometimes being tasered for longer than the 15 second limit that Taser International recommends. In one case a black man named Anthony Howard was tasered nine times for a total of 37 seconds by Montgomery County Police. He stopped breathing and died shortly afterward. Video of the incident shows that when Howard was first tasered, he was standing still, holding a child’s scooter. After he dropped the scooter and fell, officers continued to shock him.

The real solution to the issue of police/community relations is much more complex than just finding the right tool or technology. There is no “magic bullet.” Instead, it requires a cultural change within police agencies — something that’s extraordinarily difficult to accomplish.

Late for work in Manhattan, you push the... [Read More]