In 1976, construction workers accidentally cut into a petroleum pipeline running under the streets of Culver City, California, resulting in a fatal explosion that essentially leveled half of a city block. It wasn’t the first or last accident of its kind, but it helped catalyze the systemization of critical color-coded utility markings — mysterious-looking tags that look like nonsense or a secret code until you start to decipher them. 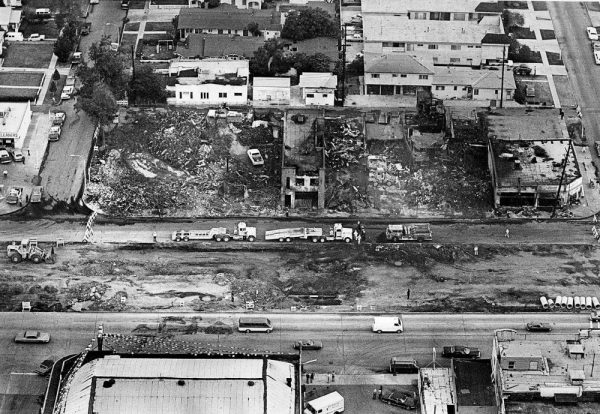 On that fateful June 15th, workers were excavating Venice Boulevard to widen the road when disaster struck. Pressurized gas from a ruptured line ignited into a fireball and smoke rose hundreds of feet into the air. Flames engulfed businesses and apartment buildings along the block, killing and injuring dozens of people. Three months later, the state created the DigAlert system for contractors and citizens to contact when planning a subterranean dig to help avoid future disasters. 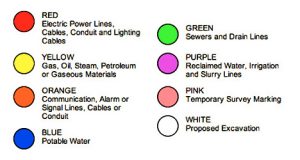 Keeping track of work areas and what’s underground can be tricky, so organizations like DigAlert mandate the use of white (paint, chalk, flour or flags) to mark off construction zones, plus Uniform Color Codes developed by the American Public Works Association (APWA) for the temporary marking of underground utilities. These “safety colors” were formalized by the American Standards Institute (ANSI) as Safety Color Code Z535.

These colors cover the general categories of unseen hazards workers need to take into account, but they are only part of the equation. Notations are also necessary to keep track of the locations, widths and depths of conduits, cables and pipes and identify the associated utility company. Accordingly, the Common Ground Alliance maintains a set of Guidelines for Operator Facility Field Delineation to indicate where and how to mark things with arrows, numbers and symbols. 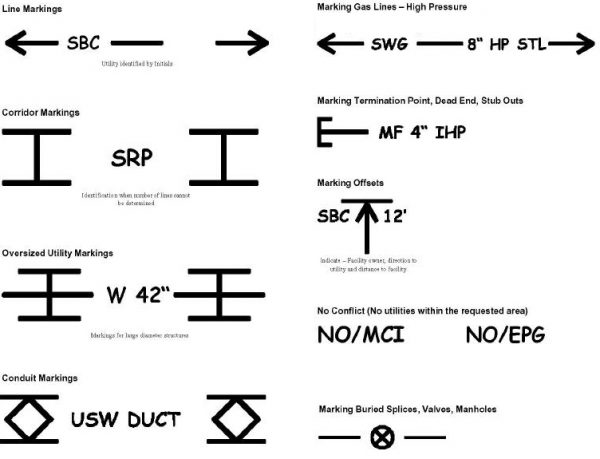 The stakes are high for underground excavation and construction projects. Negligent digging can cause everything from a major utility outage to gas leak evacuations (or worse). Hitting a water main may also trigger local flooding or require a boil-water advisory. In the US, thanks to the 2002 Pipeline Safety Improvement Act, most municipalities require that people call before digging. Utilities will then send people out to mark out underground hazards. Other countries have evolved various similar systems to avoid accidents as well.

Deciphering Utility Codes Around the World

Some places, like Scotland, offer excavators detailed maps of utilities, but in the rest of the UK, for instance, people are on their own when it comes to finding and avoiding obstacles. Many thus rely on CATs (Cable Avoidance Tools) to identify dangers. For metal pipes and cables, electromagnetic equipment can help workers “see” below the surface. For plastic or concrete piping, ground-penetrating radar is employed.

Various countries have also evolved different color schemes and markings, too, often with some overlap (like: blue for water) On British roads, many colors are the same as in the US, but some vary (e.g. green is used for telecom rather than sewage and drain lines). In terms of markings, a number next to a “D” indicates depth and a looping infinity symbol marks the beginning or end of a project area. For electrical lines, “H/V” means high voltage and “L/V” low voltage, while “S/L” is for streetlights. For gas lines, “HP” denotes high pressure while “MP” refers to medium pressure and “LP” stands for low pressure. With standards guides in hand, these odd hieroglyphics start to become legible.

Australia has its own system too, using orange for electricity, yellow for gas, blue for water, light blue for air, white for communications, red for fire services, cream for sewage, purple for reclaimed water, silver or gray for steam, pink for “unknown,” brown for oils and black for other liquids. Most of Canada uses the same system as the United States.

The subterranean stretches of most cities are teeming with utilities, not to mention mass transit and road tunnels. Mapping and marking all of this is a complex task often done by third-party contractors whose sole job it is to locate and tag potential hazards below. The biodegradable paints they use are generally designed to fade over time, but, for those in the know, these odd scribblings provide unique temporary windows into the complex systems running underneath our built environments. And for residents, as well as workers in a dangerous industry, these codes are essential to public and workplace safety.

Update: This story was expanded with further research and included in The 99% Invisible City book by Roman Mars & Kurt Kohlstedt: