In the trailer for Ready Player One, a science-fiction film set in a packed dystopia, we zoom in on our protagonist living in a dilapidated landscape of stacked “mobile homes” known aptly as “the Stacks.”

The Stacks symbolize anything but mobility, either physical or economic — if anything, they ironically represent tragic levels of immobility. In Ernest Cline’s imaginary world, a shared cyberspace is the only escape. But visions of vertical mobile housing weren’t always so dystopian. 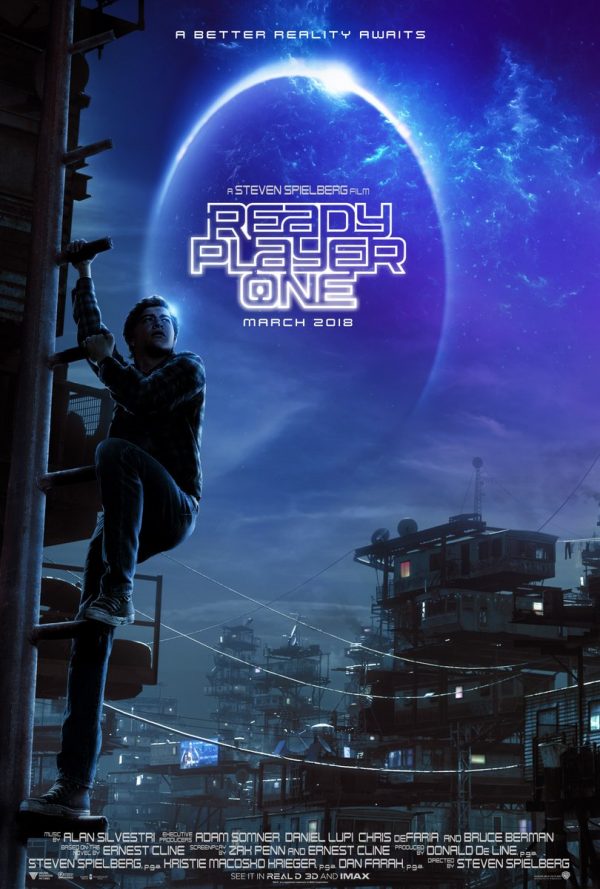 Trailer Parks in the Sky

In July of 1966, the Milwaukee Sentinel proudly reported that Wisconsin’s largest city could become “the first metropolis to have a high rise apartment for mobile homes.” The piece was referring to SkyRise Terrace, a pair of drive-in skyscrapers for portable dwellings envisioned by mobile housing entrepreneur Elmer Frey. 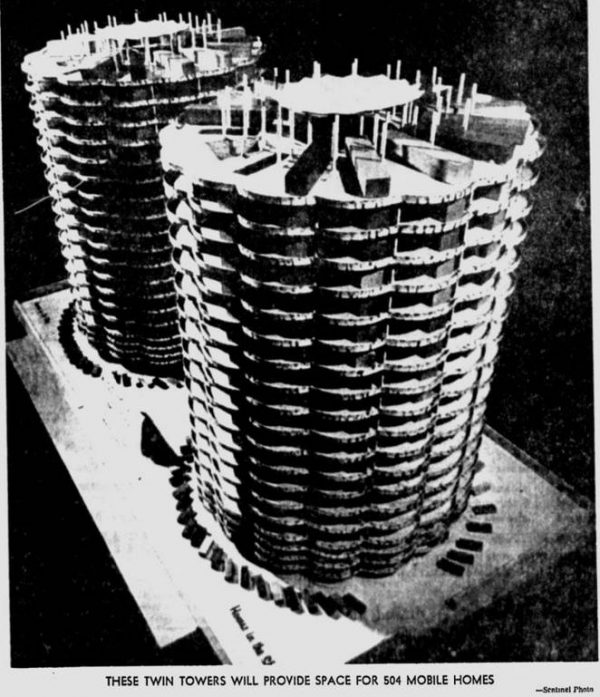 The project’s twin plug-and-play towers, each 332 feet tall, would let a mobile home owner rent out, drive up and park in one of 504 slots around the periphery of each structure. The lower levels were to contain stores and upper levels a restaurant plus community spaces.

Imagine the potential: people could move from city to city whenever they wanted, renting out tower slots right in in the middle of dense downtowns. Just bring your own residence to enjoy the view, then pick up stakes (or rather: parking brakes) and move on to the next one. 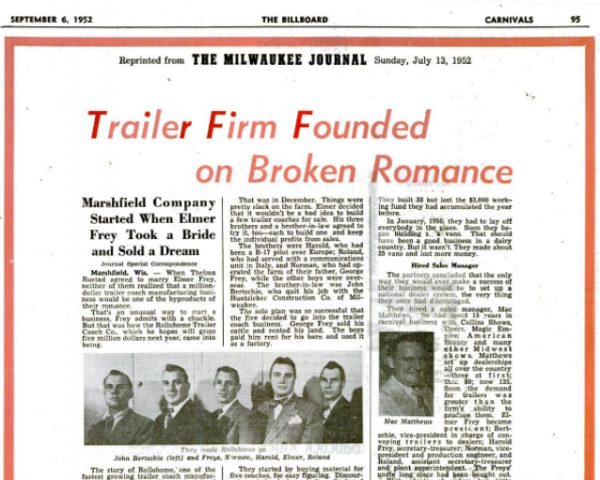 Frey’s ideas were taken seriously in part because he was already an established pioneer in the mobile housing industry. Years earlier, Frey  coined the term “mobile home” (they had previously been called house trailers or trailer coaches), writes Stewart Brand in How Buildings Learn, a book about how architecture adapts over time. Frey also helped lobby the government to allow ten-foot-wide homes on roads.

While a seemingly small step up from eight-wides, these extra two feet were a critical development: they allowed for hallways, and thus private rooms. Taken right from the factory to a building site, these dwellings were also more permanent — they were made to travel to a plot of land and be installed, not cruise the highway. By 1960, most mobile homes being sold were ten-wides and twelve-wides started to appear.

Getting Mobile Homes Off the Ground

Frey, meanwhile, was still fascinated with manufactured housing stacks, yet unable to get traction for his full-sized SkyRise Terrace vision. So in 1972 he settled for a smaller prototype in Saint Paul, Minnesota — three stacks of three “mobile” homes each. The units were lifted and set into a concrete framework with decks and staircases. In theory these could be swapped out but in practice they stayed put. Issues arose and the project was scrapped a few years later — water pipes freezing in winter was reportedly a main issue.

Built in the same year, a nearby four-story variant stayed up for a lot longer before being demolished a few decades later. After surviving a serious weather event, the complex was nicknamed Tornado Towers. It proved itself to be robust, but many saw it as an eyesore. It was so disliked that the city of Mankato eventually bought the complex back just so they could tear it down and replace it with something else.

Critics felt the city should just condemn it as blight to acquire it more cheaply and thus save taxpayer money, but officials couldn’t figure out how to value the structure — “we didn’t do a cost comparison, because how do you make a comparison with something like this?” 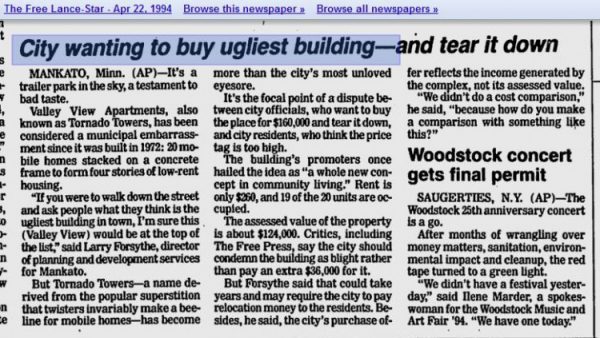 Even the son of the building complex’s last owner, Nathaniel Hood, recalls the place being problematic — among other things, the exposed nature of the units made them impossible to heat effectively. Minnesota’s notoriously hot summers and cold winters clearly don’t lend themselves to this kind of modular plug-in framing system. “In many ways,” Hood says, “they were terribly built. And ugly.” 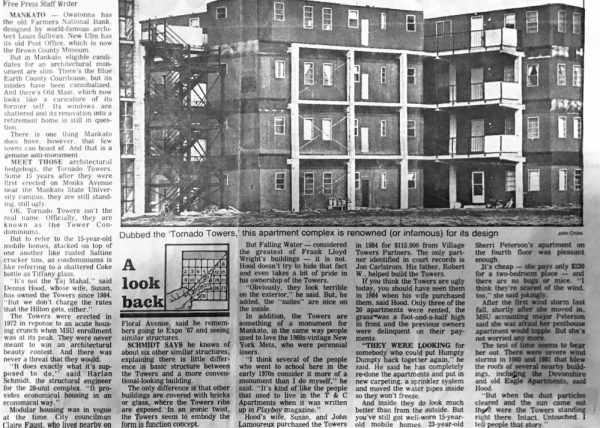 But the rent was cheap and “there was a lot of love about [a place] that houses mostly poor college students and immigrants in a small Minnesota town,” says Hood, who has mixed feelings about it. “It was ugly, yet iconic in the most beautiful way. Looking back, the city eventually buying them and demolishing them feels like a mistake.”

It is ultimately hard to say how much this set of projects reflects Frey’s ideals. People could never drive in and out of these structures — as soon cranes were involved, the reality was much less about mobility. Perhaps things would have turned out differently if he had got funding for SkyRise Terrace rather than a qualitatively different prototype.

Frey’s lofty visions were arguably a product of the period, characterized by explosive growth in mobile housing and other portable architectural explorations (like Archigram’s modular Plug-In City). In the 1970s, the U.S. Department of Housing and Urban Development (HUD) officially recognized this growth through new federal codes, creating what Brand describes as well-intended but ultimately a “burdensome set of regulations that [drove] small manufacturers out of business.”

Still, by 1985, a third of new homes being built (and two thirds of new low-cost, single-family houses) were mobile or manufactured — today, these types of structures still represent around 7% of building stock. 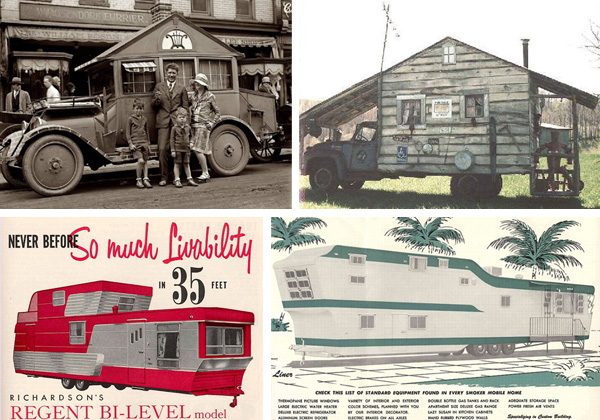 Allan Wallis opens his history of 20th-century mobile housing in America (Wheel Estate: The Rise and Decline of Mobile Homes) with an assertion that these “may well be the most significant and unique housing innovation in twentieth-century America,” more “widely adopted [and] simultaneously more vilified” than any other type. Mobile homes changed how people lived, if often in unexpected ways. 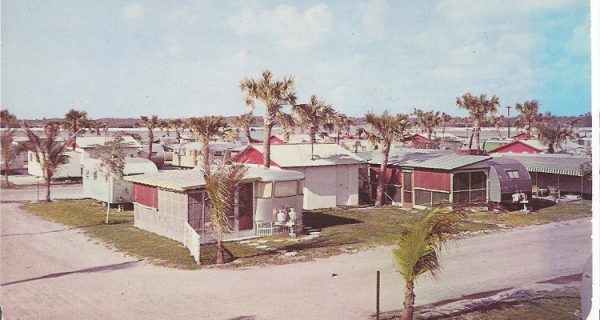 One could argue that the popularity of the ten-wide was the beginning of the end for the mobile housing era. What started out as travel trailers had led to a growth in mobile homes that then morphed into something else, driven by size and economics. Today, many residents rent semi-permanent space for such homes from land owners, creating an unfortunate side effect: an incomplete form of ownership.

But that lack of land ownership is also beginning to change. Organizations like ROC USA (the ROC standing for Resident-Owned Communities) have formed around the idea of collective ownership. Currently, only around 1,000 of 50,000 nationwide mobile home parks are owned by residents — a statistic ROC aims to change.

That organization’s president, Paul Bradley, says that since 2008 “ROC USA has helped 2,200 homeowners in 35 communities purchase their parks and gain economic security.” When a park comes up for sale, ROC helps residents form co-ops and finance the deal. For them, it’s not about recapturing a dream of mobility, but rather addressing unintended consequences of a long trend toward permanence.

Epilogue: The Dream of Vertical Mobility

Meanwhile, in films and reality alike, the dream of stacked mobile housing never seems to fully fade. In this era of renewed interest in prefabricated, tiny, modular and portable homes, new concepts along the lines of SkyRise Terrace have been proposed time and time again. 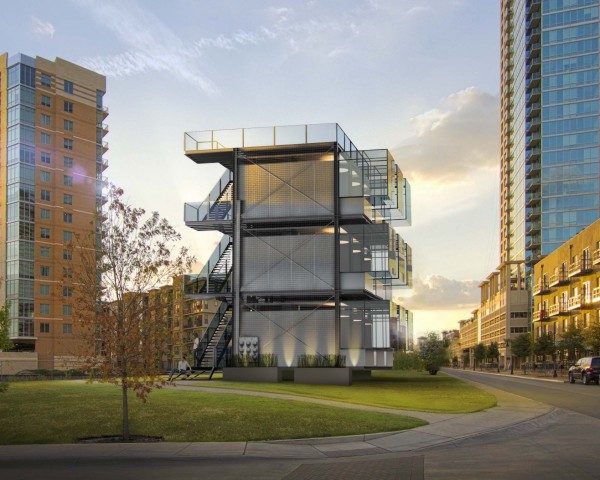 Micro-housing startup Kasita unveiled plans a few years ago for something that looks much like an updated version of Frey’s Saint Paul project, with three columns of three mobile homes each. The founder’s intention is to build these across a number of different major cities then let inhabitants (or perhaps: users) swap locations on demand, again recalling Frey’s vision of mobile urban living. Like hailing a ride share vehicle, the push of a button on a mobile app would initiate the moving process. The startup’s CEO, professor Jeff Wilson, was reportedly inspired to start the company after spending a year living in a dumpster (earning him the nickname Professor Dumpster). 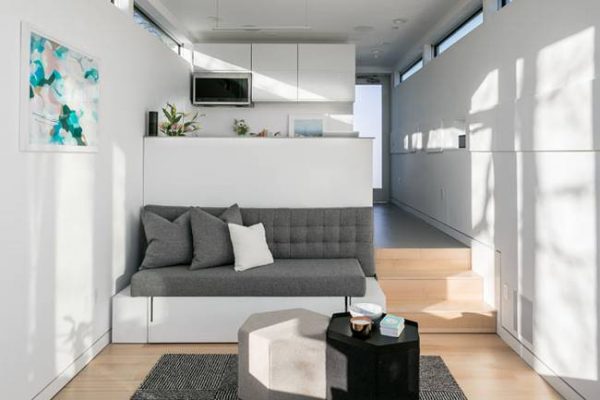 Of course, the branding around projects like Kasita is generally quite carefully crafted — design concepts like “small-space living” and “modular homes” have somewhat more appeal (or at least: less baggage) than “mobile homes” or “trailer parks.” Regardless of phrasing, though, the company’s founder boasts about the economic advantages of mass-production and, of course, the flexibility of mobile urban living, all of which sounds very familiar with respect to Frey.

But this again raises the question of land ownership: whether or not someone owns a given unit, they will still have to pay rent on the space it occupies. And some critics have called this a “solution in search of a problem” —  hiring furniture movers, they note, is cheaper and easier than engaging a crane and truck to move a whole home. It may be time to give up on this dream of modular plug-in housing, or at least revisit a more genuinely mobile approach like SkyRise Terrace, not The Stacks.

Special thanks to Nathaniel Hood, a founding member of Streets.MN, as well as Dan Black of LandLand, a two-person print studio based in the Midwest – you can check out more of his beautiful designs here.

99% Invisible
The Modularity is Here: A Modern History of…

The Modularity is Here: A Modern History of Modular Mass Housing