In 1960, the designer furniture company Herman Miller formed a research division and began examining how offices actually work. Under the direction of inventor Robert Propst, mathematicians, psychologists and anthropologists were consulted and layouts were examined with an eye toward worker behavior and performance.

Out of this endeavor came a modular Action Office system. Made to modernize work environments, this system included a key design element that would fundamentally reshape offices: the cubicle.

As a space-saving strategy, open plans dominated offices up through the middle of the 20th century. Like Henry Ford’s assembly lines, open layouts with rows of desks were seen as an organized and efficient option as office work expanded in the early 1900s.

Shortly after the “office landscape” debuted, Herman Miller’s research also led them to conclude that open offices needed to be broken up — workers, they decided, needed to get up, move around and interact more. Their first stab at a solution, the Action Office, involved furniture of different heights for different tasks. But the products were difficult to assemble, expensive and ultimately failed to gain traction. 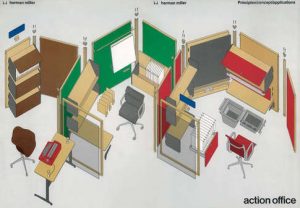 Action Office II aimed to address the shortcomings of its predecessor. It featured a system of interchangeable and standardized components that were easy to assemble and install. And at the heart of this successor was a mobile wall system enabling modular flexibility, like the “office landscape” but rectilinear. It would provide privacy, balancing open and closed office designs. Herman Miller would ultimately expand this strategy into other environments, developing a modular Coherent Structures series for hospitals and laboratories. 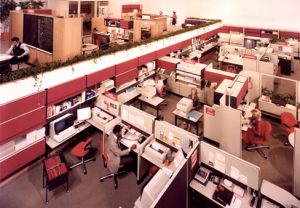 One of the key personnel involved with the project, however, would go on to become one of its sharpest critics. In 1970, George Nelson (by this time the Vice President of Corporate Design and Communication), lamented the “dehumanizing effect” of the system, writing in an internal memo: “One does not have to be an especially perceptive critic to realize that AO-II is definitely not a system which produces an environment gratifying for people in general. But it is admirable for planners looking for ways of cramming in a maximum number of bodies, for ’employees’ [and] ‘personnel,’ corporate zombies, the walking dead, the silent majority. A large market.” 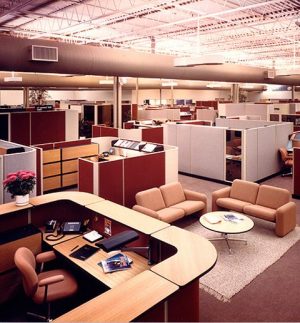 As Nelson foresaw, Action Office II cubicles went on to become a commercial success and its systems were widely imitated by other companies. Along the way, though, much of the optimism and modular vision was lost. Today’s “cubicle farms” are often static, cramped and the subject of derision in popular media (including Office Space and The Matrix). Herman Miller stills sells a variety of Action Office systems, some of which look quite elegant and functional, but the associations they conjure have changed a lot over the decades.

Even inventor Robert Propst has expressed regret at the results of his work. He had hoped his systems would “give knowledge workers a more flexible, fluid environment than the rat-maze boxes of offices,” but lamented the way things actually unfolded — “the cubicle-izing of people in modern corporations is monolithic insanity,” he said in 1997.

The recent popularity of open offices has been hailed by some as liberating workers from seas of boring cubicles. But open layouts also put people right back where they used to be: clustered together in shared space, which research suggests is inefficient and unhealthy.

Some companies, meanwhile, are experimenting with combinations of niche spaces — loud and quiet, interactive and private. The best solution may ultimately be something along the lines of what Herman Miller envisioned back in the very first action office: a mix of furniture and spaces that provide an array of environments for workers.

Previous Episode: Car-Free Cities: “Gridlock Sam” and the Drive to Reclaim Urban Roadways
Next Episode: ‘Shared Space’ Design: Road Signs Suck. What if We Got Rid of Them All?