The city of Paris recently held its third iteration of a “Day Without Cars,” this time banning vehicles from around 40 square miles of the city. This isn’t their only car reduction experiment — around the city, other tests are taking place and major intersections are being redesigned to prioritize cyclists and pedestrians, in some cases blocking cars entirely. 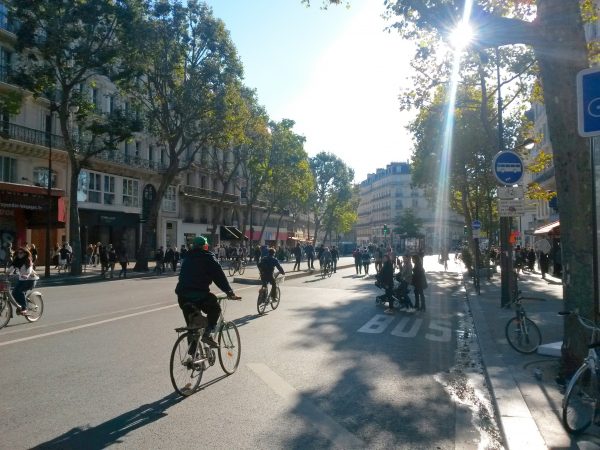 Around the world, other countries are also looking at new ways to reduce or eliminate car traffic in downtown areas, aiming to reduce collision danger as well as air and noise pollution. London famously levies a “congestion charge,” Barcelona is developing car-free “superblocks,” Hamburg has a 20-year plan to eliminate cars downtown and China has talked about building a city free of cars from scratch. 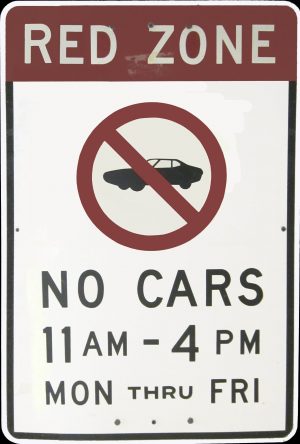 But this drive to eliminate cars from urban areas is not new, and places like New York City illustrate the long-standing debate over the role of vehicles in cities. As far back as the 1970s, NYC had car-free champions — people like Gridlock Sam (so nicknamed for coining the term “gridlock”). A traffic department employee, Sam Schwartz was excited to be part of pushing back against the rise of urban automobiles. The city even got as far as printing signs before a proposed car-free Red Zone idea was officially scrapped.

Cars had been slowly taking over NYC for decades. Tolls were rolled back on bridges between boroughs. Street car lines were ripped up in favor of road space. Schwartz and other activists pitched all kinds of solutions to help clear up the streets, including passenger mandates (no cars in Manhattan with just drivers) and congestion pricing (an idea invented by a Nobel Prize-winning Columbia University professor).

But politicians and businessmen pushed back against these and other efforts to reduce traffic and turn roads into bike lanes and public plazas. Giving more spaces to pedestrians could boost crime, some worried, creating more room for troublemakers on the streets. Cutting off cars could hurt shopping and hotels, claimed industry lobbyists. Indeed, “gridlock” came to mean not just literal traffic jams, but also the bureaucratic congestion encountered in urban (and other) politics.

Now, decades later, the city has slowly made progress toward the reduced-gridlock world Schwartz envisioned nearly 50 years ago. Pedestrian-only plazas and protected bike lanes are no longer politically implausible like they used to be. Congestion pricing and tolls are also back on the table as well. The city has experimented with car-free sections, too — a few years back a 60-block area was experimentally turned over to pedestrians for an afternoon. Pollution, noise and space are factors, but this push also speaks to larger questions about urban design history and the very nature of cities.

“We must first remember that all cities were car-free little more than a century ago,” writes J. H. Crawford, “Cars were never necessary in cities and in many respects they worked against the fundamental purpose of cities: to bring many people together in a space where social, cultural and economic synergies could develop. Because cars require so much space for movement and parking, they work against this objective — they cause cities to expand in order to provide the land cars need.”

The future that car-free advocates like Crawford imagine is in many ways nothing new. Rather, it represents a return to a time before vehicles drove suburban expansion and when urban pedestrians shared the road comfortably with various modes of transportation.

In a sometimes-disputed territorial map of global rat... [Read More]

This Is Chance: Anchorwoman of the Great Alaska Earthquake