Along flat stretches of countryside from Argentina and South Africa to  the United Kingdom, strange spires can be spotted at a great distance, but what really stands out up close is the goats that occupy them.

Goat towers date back over a century, but many more recent ones trace their inspiration back to one in particular: Torre das Cabras (Tower of the Goats), a winding turret built in Portugal during the late 1800s. This particular tower features a jagged stone facade wrapped in a wooden ramp and topped with a round peaked roof. While not quite as aesthetically lofty as a faux Roman temple, Egyptian pyramid, or Gothic abbey, it was in many ways a product of its era, at home in a period filled with architectural follies designed to liven up landscapes

Situated on a broad winery estate, the goat tower is one of various “artistic daydreams with no functional explanation,” according to 13th-generation member of the family that owns the land. It was built by his ancestors, who believed that “the goats did not belong to the plains [and thus] built the goat tower, so they could have a mountain.”

Naturally, in the digital age, these towers have become attractions, easily shared on social media and thus drawing visitors from around the world. Take the Tower of Baaa: standing nearly three dozen feet tall, this structure was built by farmer David Johnson to serve his resident climbing animals in Findlay, Illinois. “Goats are the most curious animals in the world so they use the tower a lot,” he says. “They come and go, passing each other on the ramp as needed.”

It’s hard to quantify the benefits of these towers to their hooved climbers but the goats, for their part, seem naturally inclined to climb them and roughly to be as entertained as their human onlookers. 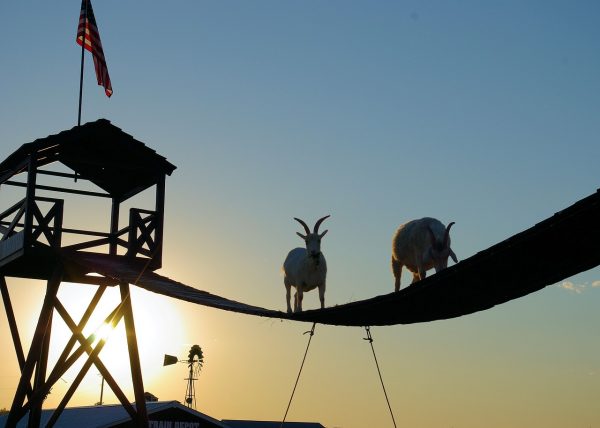 Previous Episode: Goofy Feet: The US Plans to Finally Standardize the Length of a Single Foot
Next Episode: Datascrapers: Vertical Filing Cabinets Set the Stage for the Information Age